Blancanieves is Pablo Berger's magical Spanish transposition of the Snow White myth into the thrilling arena of bullfighting and flamenco. Opening tomorrow in New York at the Paris as well as the Angelika, this sumptuous black-and-white silent drama is cause not only for celebration, but for reflection on why "Snow White" is so adaptable now. Given the 2012 release of Mirror, Mirror as well as Snow White and the Huntsman, filmmakers are clearly drawn to a malleable myth of female heroism. Once upon a time, the ending was a romantic couple that would live happily ever after. Now, the abused, kind and brave Snow White becomes her own evolved self, whether as a warrior or a matador.

Blancanieves is the most thrilling of the adaptations, partly because of its evocative time and place -- 1920s Spain, where a matador is like a king. Paradoxically (and like The Artist), the film is both self-consciously stylized and emotionally charged, balancing formal dexterity with melodrama. Berger shifts the emphasis from the traditional romance of the fairy tale to the growing love between a widower and his daughter; and instead of a prince appearing, the imprisoned child becomes a matador herself.

Last year's versions seem like preludes to this Spanish extravaganza. In Tarsem Singh's Mirror, Mirror, the dwarfs train Snow White (Lily Collins) to be a warrior, but she is still destined to end up with Prince Alcott. While typically handsome, Armie Hammer's prince is consistently and delightfully made to look foolish, whether robbed of clothes by the seven dwarf warriors, or given a puppy love potion by the Evil Queen (Julia Roberts, hamming it up as the quintessentially cruel stepmother with a fear of aging).

Released two months later, the darker Snow White and the Huntsman, directed by Rupert Sanders, includes more than one prince and culminates in Snow (Kristin Stewart) becoming a warrior; she is crowned queen at the end, with no king in sight. She becomes a soldier and leads men to take back the kingdom from her evil stepmother Ravenna (Charlize Theron).

Snow's romantic interest is not a comic prince, but a grieving widower (Chris Hemsworth, looking darker, literally & figuratively, than in Thor) who has a gift for weapons. The seven dwarfs help to empower Snow, leading to a showdown between two females (with men as merely background figures): although Ravenna has dark magic at her disposal, Snow's integrity leads her to triumph and destroy her nemesis. 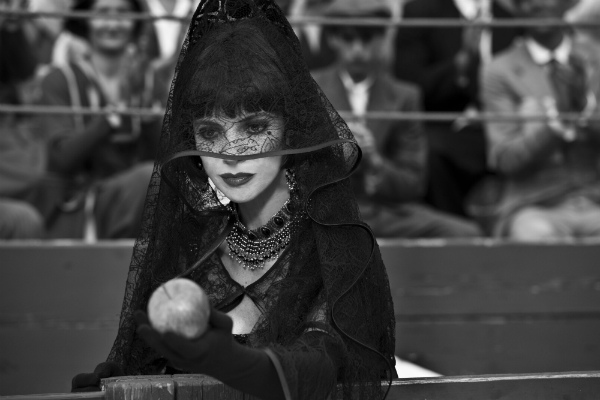 Berger's version introduces Encarna (Maribel Verdú, from Y Tu Mama Tambien), a scheming nurse who becomes indispensable to the famous wounded matador whose wife has died in childbirth. He marries her, leaving little Carmencita (Sofía Oria) to be raised by her loving grandmother (the magnificent Spanish star Angela Molina). But when the latter dies, Encarna locks her stepdaughter in a coal cellar.

She grows into Carmen (Inma Cuesta), left for dead after being strangled and drowned by her stepmother's henchman/lover. She is discovered and resuscitated by a dwarf, who is part of a matador group that includes a transvestite. The amnesiac Carmen travels with them and becomes a matador herself.

When asked about the revival of cinematic interest in this fairy tale, Berger replied, "people want to hear and see stories that speak to their inner child. The popular fairy tales belong to the oral tradition of storytelling. They have passed the test of time: only they great ones have prevailed and are retold nowadays." 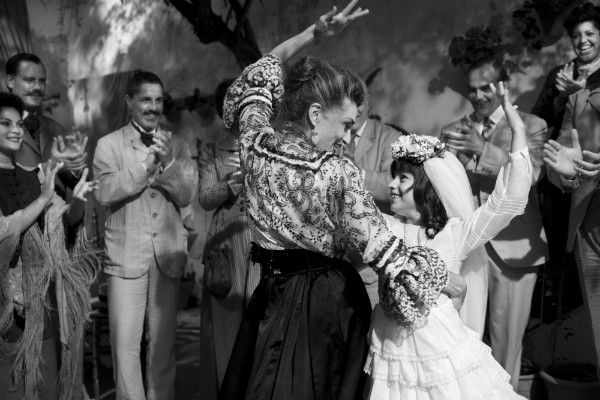 Angela Molina as the grandmother

While sipping cappuccino in a café of the Film Society of Lincoln Center, he added, "the famous Grimm tales were not written by them. They just transcribed these oral folk tales into book form. For that reason, you don't have to be faithful when you write the script, as these tales belong to all of us."

Given that each tale is no more than three pages, "when you write a script of 90 pages, you can -- and should -- be extremely unfaithful to the source. I created many new characters, plots, subplots, and translated the story to the exotic and mysterious Spain of the 1920s. In a way, while writing the script I felt like a jazz musician. When I was close to the source, it was like playing the melody of a jazz standard; but most of the time, I felt I was improvising and playing free jazz."

Born in Bilbao and based in Madrid, he is fluent in English, having done graduate work in filmmaking at NYU. He has even taught film at Yale, Princeton and the Sorbonne in France. His love of silent movies began when he was a teenager and saw Erich von Stroheim's classic Greed with a live orchestra at the San Sebastian Film Festival.

Ironically enough, Berger wrote Blancanieves as a silent film in 2004, unaware that Michel Hazanavicius would be first out of the gate with The Artist. The French movie premiered at the Cannes Film Festival one week before Berger began shooting. The Spanish director acknowledged a mixed blessing: The Artist might have stolen his thunder with the element of surprise (Black-and-white?! Silent?!), but it also opened the door to popular success for a drama with neither dialogue nor color.

If The Artist went on to win the Oscar for Best Film, Blancanieves received 10 Goya Awards (Spain's equivalent of the Oscars), including Best Picture, and the San Sebastian Film Festival's Special Jury Prize as well as Best Actress. Berger's Snow White is reminiscent of the female children of Spanish-language masterpieces such as Cria Cuervos, Spirit of the Beehive, and Pan's Labyrinth. The heroines may be vulnerable (partly because fathers are either weak or absent), but these Snow White figures embody a spirit of magical resistance, especially towards cruelty.

_____
Annette Insdorf, Director of Undergraduate Film Studies at Columbia University, is the author of PHILIP KAUFMAN.