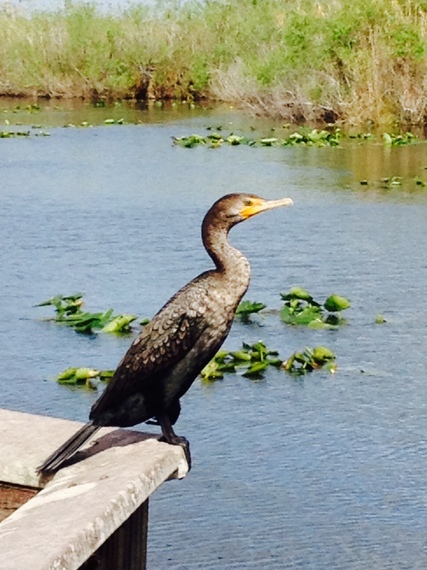 What does one say about a couple embarking on a long road trip to Florida with multiple destinations in pursuit of family, adventure, and warmth while accompanied by two other family members -- their pet cats, who just happen to be 13-year-old brothers? Presuming surprise from some of my readers or condemnation from others citing animal-rights concerns, let me assure that our "road warriors" (Gilligan and Moesley) were much better than your typical back-seat drivers and added to the journey with some prerequisites on designated stops. It was a matter of necessity as one brother has a medical condition requiring his fix twice a day and on time.

Let me focus now on the wildlife and flora Ambassador Mo and I experienced and our immersion into the "wild kingdoms" of The Everglades and Key West.

The Everglades National Park is more than just the third largest national park visited by $1 million people a year and the largest subtropical wetland in the United States. It is a vast, fragile ecosystem that was established in 1947 to protect it and the habitat of its rare and endangered species. It is an International Biosphere and Wetland of International Importance that has been earmarked a UNESCO World Heritage Site. "World Heritage is the designation for places on Earth that are of outstanding universal value to humanity and as such, have been inscribed on the World Heritage List to be protected for future generations to appreciate and enjoy." (See: UNESCO)

Elevation never tops eight feet above sea level in this gently sloping landscape. In the 1940's Marjory Stoneman Douglas, a well-known conservationist, named it a "River of Grass." But this "River of Grass" with its native flora and fauna are in peril due to competition for a valuable resource - water. Water control structures, agricultural runoff, high mercury levels, invasive plants and animals, and increased population and development are contributing to endangered and threatened species like the wood stork and other wading birds, Florida panther, manatee, and American crocodile. (See: National Park Service - Everglades.) The promising news is the Comprehensive Everglades Restoration Plan authorized by Congress to renew water's more natural system. According to Bloomberg News, National Parks return $10 for every $1 invested by the US taxpayer. These parks are a magnet for tourism around the country and from overseas guests.

There are two seasons in The Everglades, rainy and dry. Ambassador Mo and I have visited The Everglades several times -- each in the dry, winter months. We returned this year to the Anhinga Trail, one of our favorites. The boardwalk path loops around a marsh area teeming with life. At this time of year, numerous alligators gather in the shallow pools and offer the best viewing opportunities. We took in all the abundant bird species: White Ibis, Roseate Spoonbill, Great Egret, Purple Gallinule, endangered Wood Stork, and our favorites - the Anhinga and Cormorant. Though somewhat similar in appearance, the Anhinga has a long, spear-like bill adapted for spearing fish, and an S-shaped neck which explains why it's also called a "Snakebird." The Cormorant by contrast has a long, hooked bill that's tilted upward when swimming. Both birds lack oil glands and are found preening with wings open in the sun to dry. Most of the anhingas we saw were high in the overhead trees, while the Cormorants looked extremely relaxed on the boardwalk trail and engaged in photo-ops. 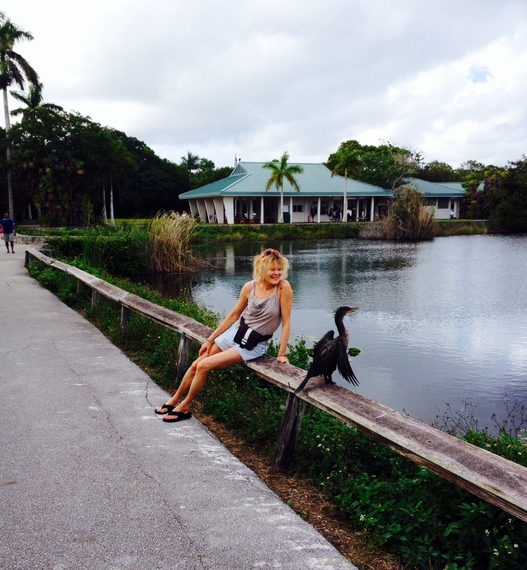 Less than 10 Florida panthers exist in The Everglades, killed more recently by cars. Nonetheless, despite their rarity and even though it was broad-daylight, I had high hopes of a sighting. Two years prior, we were treated to a glimpse of a jaguarundi while driving through the Glades to Miami at night. Didn't know what this phantom was at the time, but later learned this smaller, rare cat, is an invader from Texas introduced to the Glades in the '40's. Alas, no sightings of either this trip - but our early return to the hotel for a feeding and med time was necessary for our "rare" breed -- alley -- before the next leg of our journey.

It's the Road to Nowhere, But at the End, It's the Destination! 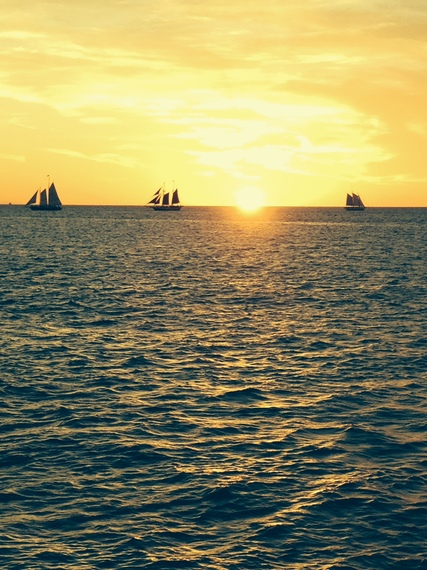 Key West is life's ultimate frolic and party. In bacchanal revelry every night at the Sunset Celebration on Mallory Square, animals -- cats, dogs, roosters, pigs, and the human variety gather to have all senses titillated and blended in escapist harmony. (See: "Do You See or Taste Music?")

On the Square you will catch performance art from acrobats, musicians, costumed dogs with owners who steal their show, pigs, and of course, cats! Dominique the Catman, who hails from Brittany, France, percolates with his feline wonders -- like Chopin, the "amazing," who walks the tightrope -- a fine line for sushi treats, and jumps through a flaming hoop to audience delight. Dominique is an institution at Mallory Square and is respected around the world while his felines strut their stuff with a nonchalance and ambivalence in knowing they're great and the "superior" animal.

The Southernmost point in the US, Key West is nature's paradise. A melting pot of worldwide nationalities embark to experience eco-friendly attractions like the Key West Butterfly & Nature Conservatory, reef snorkeling, diving, and after-parties at local's and visitor's favorite watering holes. Sloppy Joe's, Hemingway's haunt on Duval Street, and the more recent Hard Rock Key West across the street which houses a wonderful collection upstairs of rock/blues and musician memorabilia, pulse with the "rhythm" and escapism.

Everyone in Key West seems more relaxed, accepting, and caring for "the other." Roosters roam the streets everywhere and issue their morning call, and "last call" all day/all night, free spirits -- no schedules. These gypsy chickens and their offspring seem to enjoy special "protected status." We personally witnessed a shopkeeper who jumped into the street to escort and rescue some chicks into his store. Of course, cock fighting is illegal and their numbers multiply; but they also are a form of insect pest control. 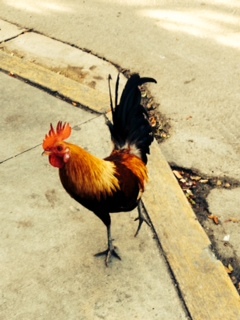 The man of the town is of course Papa Hemingway. His larger-than-life spirit permeates the very air of Sloppy Joe's and the Ernest Hemingway House, a gift for his wealthy heiress second wife, Pauline, from her uncle. Although visitors come from all over the world to see the studio where Papa wrote and his famous typewriter, and Pauline's extravagant chandeliers which replaced all ceiling fans, I would venture to say that an equal number are coming to view well-over 50 six-toed cats - polydactyls - all descended from Snowball. Hemingway believed his cats were good luck. They have the run of the house, its gardens, furniture, even their own cemetery were celebrity names like Clark Gable, Marilyn Monroe, and Zsa Zsa Gabor grace the grounds. All seemed very healthy, at peace with themselves and their surroundings, and their pampered lives in general.

This was my second visit, and this time I opted for a guided tour -- which was a real plus. Papa had four wives, wife #3 probably the most famous for the recent HBO movie, Hemingway & Gellhorn starring Nicole Kidman and Clive Owen. (I just chanced to watch this two weeks after my return from the Keys, and it's pretty accurate.) Wife #2 Pauline was an equally colorful, passionate, and spirited partner. Upon discovering Hemingway's affair with Martha Gellhorn while both were war correspondents in Europe, she installed a $20,000 outdoor swimming pool in his absence, an unheard of sum at the time. He returned furious and claimed she took him for his last cent. The patio cement outside the pool had not yet settled, and Pauline promptly inserted a penny still observed under glass as a tribute to his expensive and tumultuous liaison. I'm sure that called for a second-round at Sloppy Joe's and a trip to Cuba with Gellhorn.

We've returned relaxed, rejuvenated and now preparing for a major blizzard to slam the East Coast. Think I'll listen to Lynyrd Skynyrd's "Free Bird" and dream ... as snow hits the windowpane. Gilligan and Moesley? -- They're already planning their next road trip adventure. 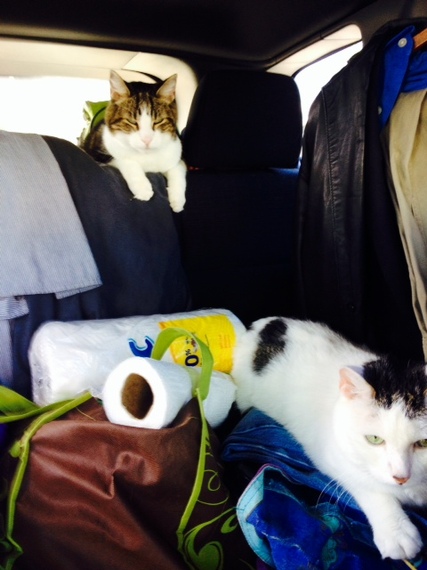