Despite the name of this influential snowboarding technology, no magnets are actually used in the making of magne-traction edges. Which is sort of a bummer because then we might be a little bit closer to those hover boards in Back to the Future.

Magne-traction is simply a wavvy-edged snowboard instead of the classically straight, traditional snowboard edge. It was developed a little over a decade ago by Lib Tech and pioneers Steven Cobb and Mike Olson.

Although magne-traction is now used as a general term for any snowboard edge having waves, the true Magne-Traction edge has seven bumps or "teeth." Each manufacturer using this design has their own individual reasons for the number of waves they use, but the underlying principles are still the same. 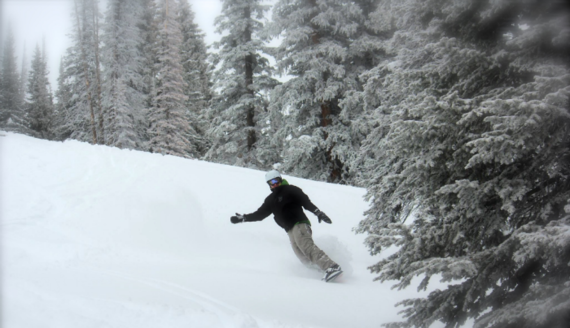 The biggest bumps are directly under your feet in the "dead zone" of your snowboard. Unless you're riding a true rocker camber, all the pressure and force caused by your weight are on the tip and tail of your snowboard, and there is very little directly below you. When you're charging hard and trying to carve on icy or changing terrain, it's easy to lose your edge. The waves in this area ensure your edge stays in contact with the mountain and you don't go spinning out of control. Along the same lines, because the pressure is on the tip and tail, the waves out there are smaller since they are already in near constant contact.

The other reason magne-traction works for increased control is that there is more total edge area in contact with the snow. For example, if you have a 158cm traditional snowboard, the effective edge length might be around 120cm. For straight edge snowboards, that is also the total length of the edge area in contact. However, for that same 158 board with magne-traction, the effective length remains the same, but the total length in contact increases.

Here you see that the two snowboards are the same size, but if you were to straighten out the edge of the board with magne-traction, it would actually be longer; thereby increasing the total edge surface in contact with the snow. That's good things on icy slopes! 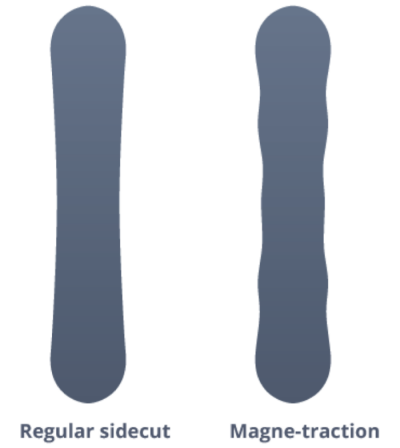 Why Magne-Traction?
The biggest reason I keep not-so-subliminally mentioning is increased control. On icy slopes, the waves bite into the mountain like I bite into cake. Trust me, that's aggressive. If you're riding in varying conditions, it gives you the added confidence that if you happen to be carving in delicious champagne powder that suddenly turns to crust, you're not going to lose your edge and go careening down the mountain face-first. Powder and crust simultaneously? Trust me, it happens a lot on the east side of the divide in Colorado.

Magne-traction isn't just for the hard-charging, all-mountain crowd either. Park riders love it just the same because they can drastically detune the edges for increased trickery on the rails and boxes, and still hold the edge during a turn.

What's the Verdict?
I don't know how much research you do on the internet, but if you ever find yourself in an internet forum, the likelihood of general consensus on ANY topic is about the same as the Cubs winning a World Series (sorry, Cubs fans). But that's not the case with magne-traction. I checked more than several snowboard forums. Some were geared towards park riders, some were for split boards, and there was a lot of general snowboarding forums too. Nevertheless, mostly all of them had mostly positive things to say.

Of the few detractors, they admitted that it was largely personal preference to stay with a traditional edge for their specific style of riding but were still impressed with the performance. The most recurring semi-negative comment was just that magne-traction seems to add very little (or no) performance in powder but greatly shines on ice. To me, that's win-win, especially riding in variable conditions.

In my biased opinion (I did mention I ride a board with magne-traction), this technology is for everyone. It's not a required must-have, but I'm willing to bet most people that try it out will experience the benefits and have a hard time going back to a traditional straight edge. Who doesn't like precision turns and avoiding trees?