This is the story of how I found out the right way to eat an apple, essentially learning that my mother has yet again failed me in every day eating and drinking routines. First it was dispensing Tic Tacs, using ketchup cups, eating cupcakes, then shucking a strawberry, then drinking soda, then streamlining Chinese food, and now this?

It all happened early yesterday morning -- I ran up to the fridge in our office just a few short skips away from my desk, pulled an apple from the fruit drawer, and chomped on it as I returned to my seat. Upon the first crunch, my desk-mate Geoff looked up from his computer, and said the inevitable phrase that eventually led to me writing this post: "Dude, you're eating that apple all wrong."

I peeked out from behind my computer, intent on finding out what miraculous shred of wisdom our content director was set to spew out of his mouth. He stood up from his seat, grabbed the apple from my hand, plucked the stem, and took a bite right through the top of the apple.

In between bites, Geoff managed, "See, eating it from the sides is wasteful. But if you eat it from the top, the core doesn't even exist."

In that moment, Geoff handed the apple back to me. Sure enough, he was nearly halfway through the apple, all without choking on what we normally consider the inedible 'core.' Eating from the top allowed more of the pleasant flesh to encompass the surface of every bite. 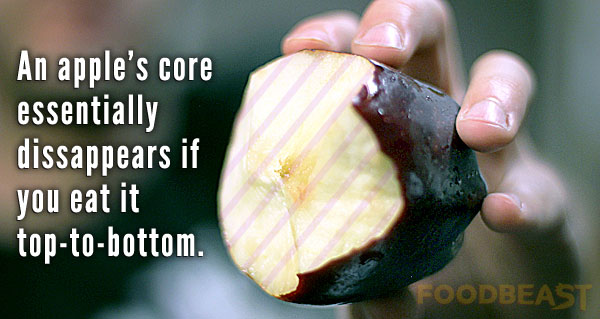 It was a moment of epiphany -- and one that eventually got the whole office thinking.

The traditional method of eating around "the core" seemed to create a sizable amount of waste. In fact, after doing a mass and volume test, we concluded we were seemingly throwing away anywhere from 15 to 30 percent of every apple. If you live by the 'apple a day' motto, then apples priced at $1.30/lb. will set you back $137 year, with a waste of $42.

Conclusion? I'm gonna stop eating my apple from left-to-right, and start eating it from top-to-bottom. The only thing I had to spit out were the seeds.

I felt like Neo in the Matrix, and I just stumbled down a rabbit hole, at the bottom of which someone was telling me, "There is no apple core."

I should have just taken the blue pill.