The needs of children and young adults in Greece are enormous. The problems there are so insurmountable that the Greek government alone cannot solve them. Neither, for that matter, can the European Union - or even the United Nations. Into this morass the J. Luce Foundation journeys, to identify orphaned and migrant children to become Luce Leaders, Fellows, and Scholars. 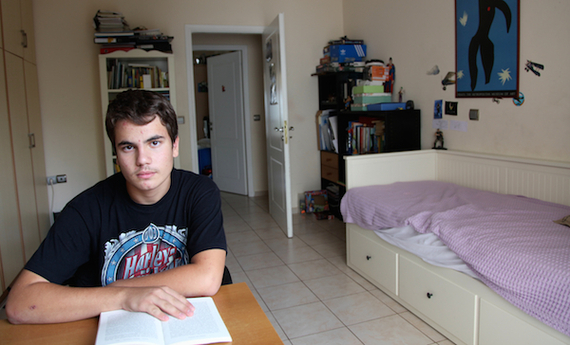 Konstantinos, 14, sits at a desk in his bedroom in a suburb of Athens, the capital.
His mother is a teacher, and his father is in the army - both professions that under-
went significant pay cuts as a result of the recession. To earn a higher salary,
his father joined a mission abroad. Photo: UNICEF/NYHQ2014-1948/Pirozzi.

Since the recession hit in 2008, Greece has faced serious economic and financial crises. Families with children have been hit particularly hard and child poverty rates have risen by over half - to over 40%.

Greeks have historically enjoyed a high standard of living and good quality of life. However living standards have suffered considerably following the economic crash. I saw first hand this summer how desperate the situation was there, although the people strong and unbending. Unemployment is high, particularly among the young - the unemployment rate for 15-24-year-olds stands now at 50%.

Video: Children on the Move (UNICEF) on Vimeo.

SOS Children's Villages are the gold standard of orphanages and I have had the privilege of visiting them in Haiti, Indonesia and Sri Lanka. I was delighted to learn they exist in Greece as well. According to SOS Greece:

The hardest hit are the 1.9 million children under the age of 18 in Greece. Poverty in rural areas is increasing rapidly and children from migrant families are especially negatively affected; they are twice as likely to end up living below the poverty line.

Shockingly, 18% of Greek families are now unable to afford a meal with meat, fish, or chicken every second day. There are growing fears about malnutrition becoming an issue. 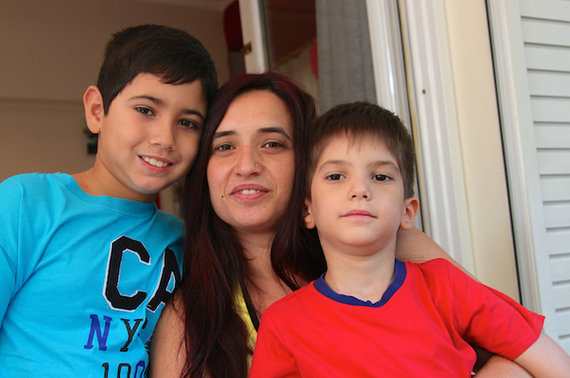 11-year-old Aggelos and 6-year-old Vasilis sit with their mother, Aggeliki, in a
suburb of Athens. Aggeliki used to work in a kindergarten but is currently
unemployed, so she and her sons must live with her mother. The family subsists
entirely on Hellen's pension - approximately US$300 - and additional income
she earns from housekeeping work. Photo: UNICEF/NYHQ2014-1947/Pirozzi.

The Greek Constitution is unique. It contains a number of solemn proclamations affecting the status of children: that childhood shall be under the protection of the State; that families with a large number of children, war orphans, and anyone who suffers from incurable physical or mental illness have the right to special care. The problem is: the State simply does not have enough funds to pay for it. The U.N. and other agencies have released these figures: 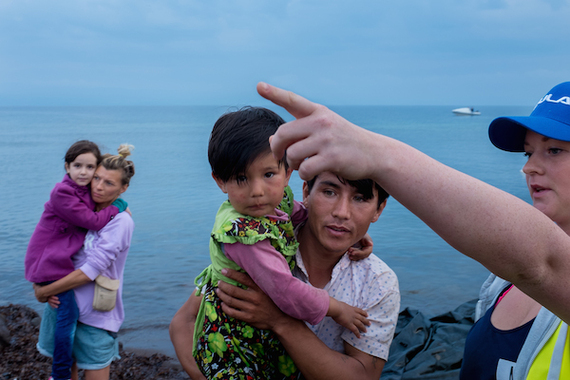 A volunteer directs a man and his daughter, both of them refugees from
Afghanistan, on the shores of the island Lesvos. By September, 387,520
refugees and migrants had arrived by sea to Greece since January.
Many children have become separated from their families on the move.
Photo: UNICEF/NYHQ2015-2528/Gilbertson VII.

Into this abyss sail migrant and refugee families -- many children becoming separated from their parents -- from countries much worse like Syria or Afghanistan. The United Nations reports that more than four million Syrians have fled their country since the country's civil war began in 2011, about half of whom are children. UNICEF states that two million Syrian children are living as refugees in neighboring countries or on the run in search of safety (site).

UNICEF reports that one in every four asylum-seekers in Europe so far this year has been a child. A total of 110,000 children sought asylum between January and July - an average of over 18,000 children every month. A significant number of children are traveling unaccompanied or have become separated from their families on the move. UNICEF estimates that as many as 320,000 refugee and migrant women and children in Europe could be in need of assistance over the next six months.

Many are in Greece. The Office of the United Nations High Commissioner for Refugees (UNHCR) projects that half a million refugees and migrants have arrived in Greece alone, with the number of children staggering.

By September, 387,520 refugees and migrants had arrived by sea to Greece since the beginning of the year. More than 153,000 had arrived so far in September alone. The main nationalities include Syrians (71%), Afghans (18%), and Iraqis (4%).

This is why we have formed The Hellenic Fund of the J. Luce Foundation. Next week here in New York, we launch the fund to raise cash and publicity for all of the children of Greece -- those devastated by the economic collapse, and those washing up on its shores. Of course, the need is larger than any government or even the United Nations can address, but if every citizen of the world did something, the situation could only improve.

The Hellenic Fund kick-off reception, beginning at 6 p.m. on Wednesday, Nov. 4 at the renowned Yefsi Estiatorio on the Upper East Side, is the first hosted event by The Orpheus Luxury Collection-Symposiums in Support series benefiting selected charities under their "Philanthropy Through Travel Initiative" program.

What has drawn me to collaborating with The Orpheus Luxury Collection and its president Georgia Nomikos is her passion not only for children, but for the ideals of Hellas. Greeks have shared ideals and ethical values built on a foundation of fundamental human virtues often shared by the Hellenes since ancient times. 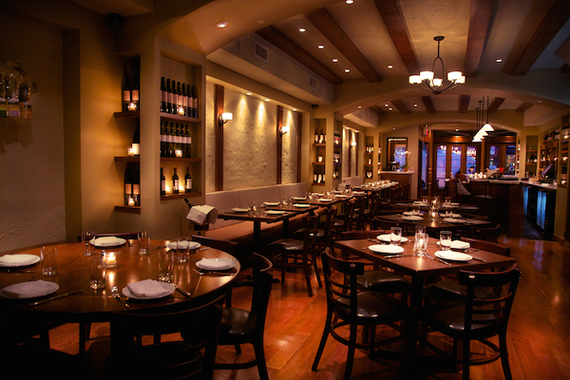 These include reciprocity, the virtue of xenia -- "hospitality" -- food, drink, clothing, shelter. This is a sacred obligation overseen by Zeus imparting a sense of social obligation to help the less fortunate.

The word philanthropy comes from the from Greek -- 'love of humanity' -- in the sense of caring and nourishing what it is to be human. This is what we must do for the children, Greek and refugee, in Hellas.

The Hellenic Fund of The J. Luce Foundation - Launch Reception