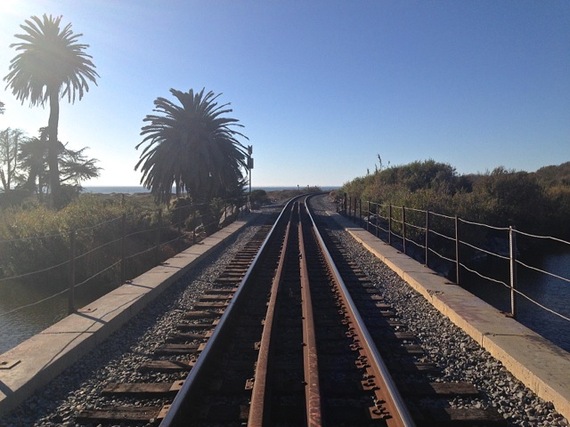 I recently realized how much I love. It is possible to love so hard this love becomes holy.

It took years. My adult life has been spent navigating the violence we do to the Earth, each other and ourselves. As an informed activist who tends to live in the apocalypse with no shortage of daily traumas, my grown tack was to convert helpless rage into positive action. But that is different from loving.

Over the past few months, things began to change, like shedding another skin. I feel excited.

A couple weeks ago I was in L.A. to grind out the movie treatment of my first book with screenwriter Carlton Jordan, and also to visit a few area foundations and non-profits. I saw the city differently this time, a creative desert city by the cold Pacific.

The Pacific Ocean is always cold any month of the year, deep blue not bright, and briny. It even smells different from the Gulf of Mexico or the Atlantic. The last day I drove an hour north to Ventura to visit Patagonia, Inc., one of the most conscious companies in the world, and a longtime non-profit benefactor. Afterwards, I walked to the beach.

Something about open, dry country in the American West. Afternoon mountains turn to shimmering blue dust.

Stepping across the railroad trestle tagged in Spanish graffiti above where the Ventura River meets the sea, the blinding white sun hurtled into me from 93 million miles away. To my left the cold Pacific washed onto the driftwood-like-bones beach. The blue dust mountain in the north soared to its sharp cut-off ridge line. Green reeds reached up from the fresh and saltwater mixing below while fish swam (fish are my friends), birds wheeled in the sky and the accidental date palm ahead like an oasis brought my body to bursting. The spirit is not separate from the flesh.

My heart hurts. It's always been hard to be thankful in the moment. I want so much for people -- especially people who have suffered -- to experience the indescribable beauty and hope of Earth and being outdoors, both in places they feel they can't go, and right at home in our neighborhoods.

Ventura is such a nice beach town filled with really good people, but I usually only see one black person.

Even down in very diverse L.A., there are people who've never been to the beach but live only several minutes away.

Heal the Bay, a Santa Monica-based non-profit, is helping South-Central L.A. residents who want to restore Compton Creek. You know Compton -- that's where, umm, loquacious Seattle Seahawks cornerback, and upcoming Super Bowl star, Richard Sherman is from, as was N.W.A. "Straight Outta Compton." People now want to connect a green trail all the way to the ocean. That is what's up.

Getting gas for my hybrid rental in Ventura, I finally saw someone black. A young thickish female, maybe 19 or 20 years old, obviously homeless or close to it, in old jeans, Converse sneakers, a v-necked t-shirt struggling to hold in her natural chest the size, of which seemed to bewilder her, and an old zip-up hooded sweatshirt. Her hair pulled back was slightly mussed. She was pushing a single speed bicycle.

Homelessness can twist you as hard as blackened sick-food feces wrenched out of guts in a hidden corner or under a bridge. But not yet for her. The furnace of her youth was still flushing red in her brassy cheeks, and her voice was light and sweet, girlish. She asked for a dollar. I wished later I had given her more.

On the other side of the ocean, in Fukushima, a place famous for fresh peaches and lives woven into the sea, people can never go to the Pacific again. From there, who knows what spreads.

Separately, if the seas rise much worldwide, as expected, there won't be beaches at all for a few generations. But no beaches will of course be the least of our climate-disrupted problems.

I love wisdom and a wiser older woman said before we ask God for something we should always give thanks. For me, thanks is letting myself be blown away by the beauty and blessings of life on Earth, and then working for renewal before it's too late.

I have been given such a blessing of life; I damn sure am going to use it and make it count.