Let's 'Face' it. In today's tech landscape, there's no bigger dog on the block than Facebook. "King Mark" has built an empire so rich and so vast that if he thinks your little startup is going to cause him problems, he simply buys you out for more money than you, or your grandkids, or their grandkids, will ever need. Problem solved.

But, what if you're not for sale? What in the world does King Mark do if you have something really great, that has millions of users around the globe buzzing about its potential as being a "game-changer," and he can't have it? Simple. He blocks you.

Being blocked from Facebook in this day and age is the equivalent of being kicked off AT&T in the mid 70s. Which, if it happened, could create some problems.

What would you do if Facebook banished you tomorrow? How would you let the world know you were being blocked? You can't post it on Facebook. You can't do it on Instagram, either, as Facebook owns that, too. Forget about tweeting it. You're attempt at alerting the world to your plight will be buried in a second by 38,000 Kardashian retweets.

Facebook is the primary source of communication for over 1.5 billion people. So, the simple act of preventing its users from linking to anything having to do with your site will all but ensure your continuing anonymity.

However, if you're the founder of a startup site that currently ranks 11,372nd in popularity in the U.S., you'd think you're good, right? Wrong.

This content/revenue stream comes from not only your page but from your network of users, i.e., friends you've invited to join and friends they've invited.

Think about all friends you told to join Facebook at the beginning. The posts you've shared, all the pages you've liked, and all the groups you've joined/started since creating your Facebook profile. Now, imagine how much revenue you've generated for Facebook. Now imagine how much you could have generated for yourself. Revenue that, with just a click of a mouse on Tsu, could be shared with the charity of your choice. No personal bank info needed.

I'm not going to get into a detailed explanation of the site's revenue model - there are dozens of pieces on Tsu's founder, Sebastian Sobczak, explaining how simply posting a link on the site can turn into dollars - except to say, think of Tsu as the social media version of Uber - just the business model, not the backlash. The site keeps 10% of ad revenue (which is derived through third party ads, partnerships and sponsors) and shares the other 90% with its users. Pretty neat, huh? That's just the tip of the iceberg.

Tsu's popularity is growing at quite an impressive pace. It registered over 3.5 million users in its first 6 months. Faster than both Facebook and Twitter. If that's not enough, due to its philanthropic mission statement, in just its first year, Tsu was chosen as the Media Partner of the Year by the Make A Wish Foundation.

To put it simply, according to Tsu's FAQ's page:

"Users should be compensated for their likeness, image and content. It's simple and it's the right thing to do."

I know a lot of musicians, artists, photographers, comedians, etc., who would probably agree. In fact, there are folks earning more from posting on Tsu than they do from their music streams.

Other areas where Tsu is taking Facebook on include:

Likes:
On Facebook, if you currently have a million 'likes,' only a fraction of those people can see your posts, as Facebook wants to entice you to "Boost" it by paying for it. Whereas, on Tsu, all your posts are visible to all who like your page.

Groups:
On Tsu, companies like Disney will be able to use their over 50 million followers to generate money for charity, as the site will automatically donate 5% to a charity of the group's choosing. Nothing like that at the moment on Facebook.

Search Bar/Analytics
One thing Facebook has sorely been missing is a search bar to quickly locate a piece you or your friend may have posted, without having to constantly hit the scroll bar. Tsu's platform has this, as well as detailed analytics on how many views your posts have received.

Data Sharing:
It's no secret anymore that Facebook willfully shares your data with every company under the sun. From Comcast to Chase, your browsing habits and web searches are tracked and monitored in perpetuity, which tilts the odds heavily in favor of any Facebook partner you may need to do business with, i.e. bank loans, mortgage rates, etc.

Compensating users for their content? Giving a percentage to charity? All this "crazy talk" is apparently starting to spook Facebook to the point where, over the past few weeks, links to anything mentioning the site, including pics containing only text, have been inexplicably erased from millions of Facebook's user's profiles.

Of course, Facebook is claiming Tsu is violating the terms of their API, a platform to platform sharing agreement, but according to Mr. Sobczak, it's just an excuse to attempt to legally justify the removal and subsequent blocking of the site from Facebook and its users. "If we are violating any type of technical or legal boundaries regarding Facebook's API, which we are not, we would see warnings on our dashboard - which we've never seen -, not to mention, we continue to receive messages that we are in compliance, all while we are being blocked," he says. "We've even been deleted from Facebook Messenger and we don't even integrate with that app."

Facebook isn't discriminating, either. According to Sobczak, they've deleted every mention of Tsu from 50 Cent's Facebook page with 38 million followers, as well as over 7,000 works of art posted by breast cancer survivor A Dog a Day. "These are independent posts shared by Facebook users without using an API and have nothing to do with Tsu," he says.

When I tried linking to Tsu on Facebook, I immediately got a warning saying it was an "unsafe link."

"Sharing a link to Tsu is no different than sharing a link to YouTube, the Huffington Post, Twitter, etc., yet, for some reason, we're being singled out as violators," states Sobczak. "It's a clear case of censorship."

As small as they are at the moment, 4 million users compared to 1.5 billion, Tsu's business model of sharing revenue with its users is impossible for Facebook to duplicate even if they wanted to, as it's now a publicly traded company.

Can you imagine Mark Zuckerberg at the next shareholders meeting telling his investors he's decided to give 90% of Facebook's ad revenue to its users? Sounds like something out of a Cohen brother's movie.

Google's currently under anti-trust investigation for allegedly attempting to block competitors from accessing Android, and way back Microsoft became the first online anti-trust casualty when it tried to shut the door on Netscape.

It doesn't take a rocket scientist to read between the lines here. Blockbuster was the big dog on the block for decades before Netflix came along. It's almost unimaginable at the moment to think that people would abandon Facebook with the idea of switching to a more user-friendly, and user-protective site. But it wasn't too long ago folks thought Myspace was the end-all-be-all of the social media landscape.

Before you go running to Tsu.co in an attempt to sign up, be aware that the site is by invite only. This will hopefully keep most of the yokels off, as well as making each ad placement in the U.S. more valuable to overseas advertisers, thus, generating more revenue for the content creator.

When you compare Facebook to Tsu, it definitely appears as if Facebook is The Matrix, and Tsu is Neo.

Not that Facebook doesn't have a boat to weather the coming storm, but, if they're not prepared, they'd be hard-pressed to survive a Tsunami. 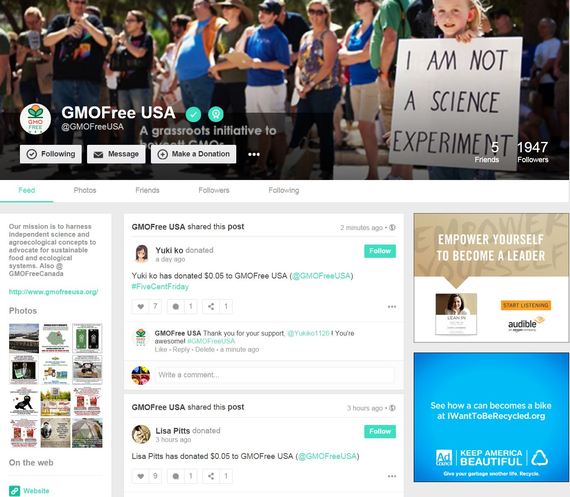