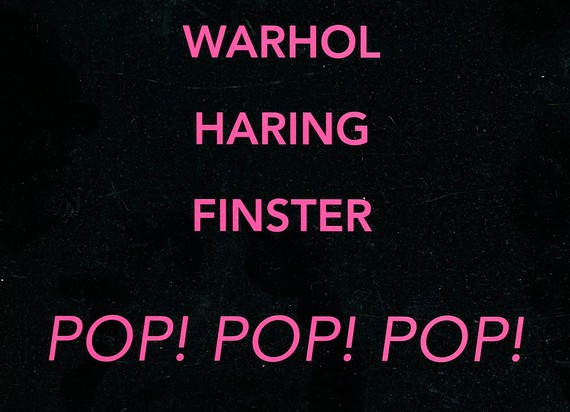 Publicity Poster for Skot Forman Gallery, Atlanta, 2004
Art is anything you can get away with.
--Andy Warhol/Marshall McLuhan

Howard Finster during his lifetime (1916-2001) was called a visionary artist in the spirit of a "backwoods William Blake" and I have argued that there was actually some real religious and artistic substance to this often cavalier comparison. I would like to consider here another common, and usually offhand, association that primarily alluded to the fact that Finster's "bad and nasty sacred art" in the 1970s and 80s primarily consisted of biblical imagery heavily laced with all manner of pop cultural references. Therefore in addition to his identification as a latter-day Blakean visionary, it was waggishly said that Finster was a kind of rustic "Southern Andy Warhol." Contrary to the temptation to trivialize Finster as a country bumpkin Southern preacher and narrow bible fundamentalist there was always enough broad reference to popular and commercial culture associated with Finster's work to suggest comparisons not only with the "POP!" creativity of Warhol but also with the rough street art of Keith Haring and Jean-Michel Basquiat.

With regard to the hip aesthetic sensibility of Warhol, Haring, and Basquiat, Finster's works are sometimes judged to be simply unconscious folksy variations on the New Yorkers' ironic pop-cartoon aesthetic of commercial marketability in an age of ubiquitous mechanical reproduction. This seems, however, too much like an interpretive judgement primarily designed to typecast Finster's work in terms of its own ostensibly innocent religious convictions. But whatever he was, Finster was certainly not innocent or naive. Moreover Finster's feverish apocalypticism in the 70s and 80s was often both passionately heartfelt and allusively, even cartoonishly and comically, incongruous (e.g., David Byrne in underpants on Finster's Talking Heads album cover). He was always too much the shrewd sideshow barker -- preacher, showman, salesman -- to forego the use of suggestively humorous commentary about "no cold Cokes in hell and no bathrooms either." In this sense, he was very much a master impresario and manipulator of images and attitudes rather like the taciturn and bewigged, but no less cunning master of cynical coolness Warhol. In this respect, Warhol would probably have identified with Finster's self-appraisal that "I am my own T.V."

One way to get at the deeper similarities is to recognize that central to Finster's career as a sacred artist was his use of what he called his two- and three-dimensional templates, or similitudes, which captured the inner spirit and structure of his visionary sights and their narrative content. These were his specially prepared artistic "dementions" or, somewhat like a craftsman's jig, his patterns for his artwork. The dimensions themselves were mostly stencils traced from photographs, advertisements, and magazines or based on some original sketch he did for one of his painted plywood cutouts. These were manifestly in the vein of Andy Warhol's silk-screened and cribbed commercial images from popular magazines and Polaroid photographs. Even more prosaically, these very practical "dementions" were Finster's many hand-prepared paper, cardboard, and plywood stencils that schematically defined a prototypical image used imaginatively to create many multiple pictures of almost anything -- Finster's own visage, family members, friends, collectors, multicolored angels, baby Elvis, George Washington, cheetahs, Coca-Cola bottles, UFOs, and so on. All of these works were mostly the same, but subject to infinite mechanical and personal variations. And like every artist, Finster produced some works -- whether cutouts or his more singular painted works -- which were simply not very good. As the knowledgeable and sensitive critic Roger Cardinal truthfully said of Finster, he was at times "slack and uninspired." The same could be said of Warhol.

It is worth remembering that even Andy Warhol, the fey ironist from Pittsburgh and Manhattan, started to "label" commercial signs as pop art and recognized that the "mystery" of art may fade by so doing. But he also instinctively knew that the productive disorientation or "amazement was just starting." And inasmuch as the boisterous Howard Finster made visionary artworks out of lowly materials that became advertising signs and messages from God, he might actually agree with the shy, laconic Warhol that even Brillo boxes and Coke bottles could truly be amazing, even sacramental or "sacred" (set apart), art. The truth seems to be that Warhol's and Finster's power as artists -- one conventionally trained and the other self-taught -- was that their best work as artistic-sign makers and salesmen displayed a skill that was congruent with, and expressive of, their respective imaginative and commercial visions. Warhol and Finster understood that being an artist, prophet, salesman, or marketing entrepreneur required the effective and practiced linking of skill and imagination that drew upon the detritus of popular celebrity culture. As a flamboyant preacher-artist or as a world-weary impresario-producer, both of them instinctively understood the need to be "amazing" and call attention to themselves and to their many artistic productions. Both were showmen who got a message out (whether religiously biblical or nihilistically pop) that produced a response. Each in his own way was a 1950-60s-style McLuhanesque artistic Mad Man.

Finster and Warhol were most of all unusually skilled sign makers and salesmen who made multiple copies of their hit works. Each had a special talent for dramatic self-promotion and effective marketing. In Warhol's case these principles emphasized the creative production of infinitely replicable versions of a Brillo box, Campbell's soup can, and Marilyn Monroe's face that were both like and unlike their actual namesakes. And for Finster, producing hundreds of cutout-template images that crudely replicated a Life magazine photo of Elvis, there is a similar attention to the craft of visual response rather than the skills of drafting. There actually is not very much difference between Finster's "dementions," or template reproductions (based on the biblical idea of "similitudes," see Hosea 12:10 in the King James Version), and Warhol's iconic simulacrums and mechanical silk screens. Indeed, the method and intent behind (to take but one example) Finster's cutout Coke bottles and his several giant, painted, plastic-bottle replicas were anticipated by, and created in the branded or trademarked spirit of, Warhol's Brillo-box sculptural reproductions in the early 1960s. Both made the original commercial objects into signifying artworks with a new religious and/or aesthetic message--as well as, of course, an enhanced monetary value. Something amazing really had taken place.

No matter how secular, sullen, nihilistic, and seemingly antireligious Warhol appeared, the truth was that he harbored deeply rooted religious feelings and practices (he was a member of the Ruthenian Eastern Rite Catholic Church and frequently attended mass), which started to come out publicly in his art late in his life. Although the cultural contexts were quite different, Warhol's otherworldly ennui and David Bowie "Major Tom" spaciness was in many ways not dissimilar to Finster's mission as a Buck Roger's stranger on this planet. And certainly for many of us in the 70s Warhol similarly came across in his laconic apparitions on television as a particularly strange other worldly visitor. Both lived their lives as ritual performances that channeled their obsessive artistic passion for realizing their mythic visions of themselves and the world. Both were entrepreneurial storytellers, theatrical-tricksters, and promoter-artists. The Factory and Paradise Garden were likewise spaces, or alternative worlds, that grounded their various mythologies. Both men drew upon specific religious traditions (Eastern Rite Catholicism and Southern Evangelical Protestantism), but both produced a kind of broadly religious signage-art that creatively stretched the conventional categories and meaning of organized religion. So perhaps it's possible to say that with respect to both religion and art Andy Warhol was actually the "Northern Howard Finster."

Note: some of this blog was adapted from my book Envisioning Howard Finster: The Religion and Art of a Stranger from Another World.

Arts Andy Warhol Outside the Lines