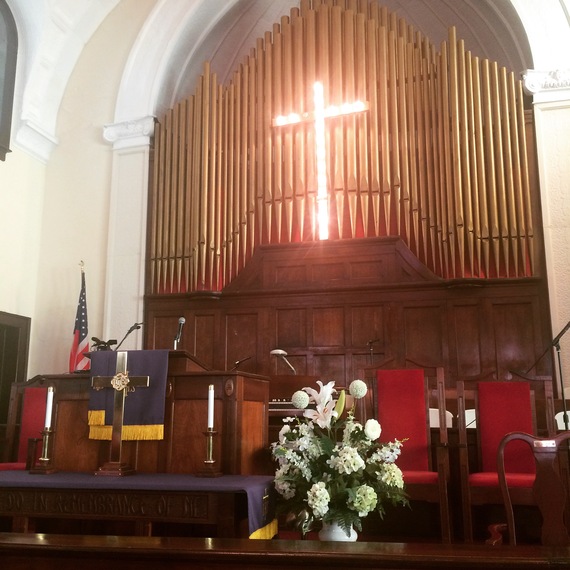 Walking the halls of Brown Chapel A.M.E. Church in Selma, Alabama history surrounds you. Each step is a living testament to the miraculous work that happened here 50 years ago. There is the hallway of photos honoring local heros that marched across the Edmund Pettus Bridge on Bloody Sunday. In the sanctuary there is a plaque naming the martyrs -- Jonathan M. Daniels, Jimmy Lee Jackson, Viola Liuzzo, and James J. Reeb -- who gave their lives fighting for the voting rights of African Americans in 1965.

At the center of it all is the pulpit. Many of the most prolific figures in modern American history have stood behind that sacred desk. It was from the pulpit of Brown Chapel that Martin Luther King, Jr. preached during mass meetings during the Selma Campaign. When King was jailed, Malcolm X spoke from the same podium just 17 days before his assassination. In March 2007, then-Senator Barack Obama made Brown Chapel one of the first stops of his presidential campaign.

On Sunday, palms sweaty and heart racing, I stepped on that famous pulpit as I stood to give the benediction at the Selma March 50th Anniversary Commemorative Church Service. Preceding me on the program was a steady stream of luminaries from the federal government, religious communities, and national civil rights organizations. Attorney General Holder gave remarks, as did Ambassador Andrew Young, Martin Luther King III, and Rev. Al Sharpton. Then there was me, a 27-year-old black clergywoman that is part of a new generation of faith leaders, organizers, and concerned citizens working to actualize a vision of the American South in which all people are able to thrive.

As founder of the Faith Matters Network, my work has taken me many places. From conversations with Vietnamese fisherfolk in Mississippi still reeling from the devastation of BP Oil Spill to singing alongside clergy and non-religious activists at die-ins in Tennessee where we boldly declared that #blacklivesmatter in the South. In Selma, the heart of America's Black Belt, I met Sherri Mitchell. She taught me about the sustained struggle of Selma residents to gain access living wage jobs, quality education, and in some cases basic sanitation services.

At the podium Sunday, the memory of these stories enveloped me. They served as a poignant reminder that the movement for civil and human rights in the South is far from over. My generation of activists may never know the sting of a fire hose or feel the sharp pain of a billy club's blow. Yet in a nation where young black men are killed and left for hours on street lying dead and 45 million Americans are trapped below the poverty line we must be careful not to confuse progress with victory. That is why after finishing the benediction, I joined 70,000 other sojourners as we crossed the Edmund Pettus Bridge and embraced the 50th anniversary of Bloody Sunday not as a commemoration but as a call to action. Today's challenges call us to lead movements that are responsive to the uniqueness of our current context. Movements that recognize the intersectional nature of the most pressing issues within our communities and understand that our work cannot be done in silos.

One thing is clear: We must march on for the prophets of the past and the foot soldiers of the future. We must march for neighbors like Sherri Mitchell. We must march because Selma is now. As we march let us keep Dr. King's words at the end of the Selma March in mind, "Let us therefore continue our triumphant march to the realization of the American dream."