As I write this I'm sitting at an Airbnb in Alexandria overlooking the Washington monument and the Capitol. The capital is now covered in fog.

Protests are heating up, with arrests and tear gas.

Earlier today, I was part of a human chain, blocking entrance to the parade route, at 10th and E. Several Trump supporters attempted to break the blockade; a few of them succeeded. Some called upon the police - at least two dozen, DC city cops to secret services. One group of over a dozen veterans, all white, most in their 60s, hurled racial and homophobic slurs as police escorted them in. 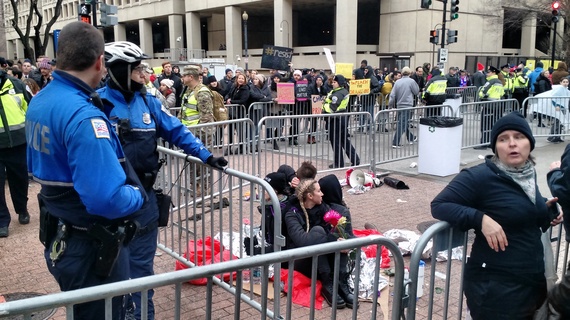 A particularly aggressive group - all white, most in their 50s or above - were all wearing some reference to the "deplorables," including a "Deplorable Me" in the style of the movie Despicable Me. One had an oversized Uncle Sam hat and long white ZZ top beard, another a Minnesota Vikings cap. They attempted to incite the crowd to violence. Older than most in the human chain - apparently there to protect four late 20s women chained to one another on lock down - I intervened, trying to deescalate, stretching my Quaker pacifism to the maximum. They backed down. 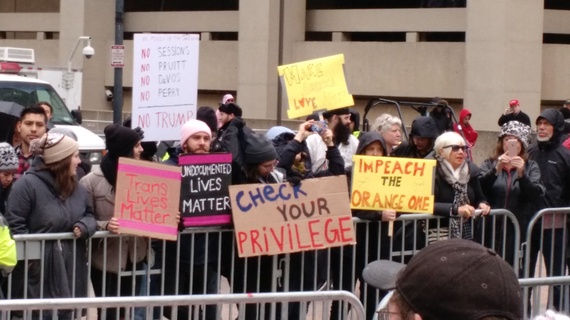 closeup of some of the messages. Photo: author

But they eventually snaked around and entered the parade route, a half block away. This is an instance of tactics overshadowing strategy. And in the language of Midwest Academy community organizing, it was becoming less and less clear about who was the "target".

It got curiouser and curiouser. Several provocateurs started by saying "we're on your side" - one claimed to have been a speaker at the A.N.S.W.E.R. event a couple of blocks over, one having a bright pink cardboard to match the 'pussyhats' who are beginning to invade the city for tomorrow's planned Women's March. A particularly dissonant moment was walking past a street vendor selling both Trump paraphernalia as well as Women's March hats.

At about 1:10 there were more people trying to leave the checkpoint than enter - the parade had passed at this point. A sea of red baseball caps "Make America Great again" were flooding the motley crew of protestors, some carrying handmade signs.

This is a recipe for confrontation. Later, news began to trickle in about tear gas. One incident apparently was recorded with someone smashing a Starbucks window. This seems so obviously a provocateur. Even in 1999, in Seattle, the 'target' was a little off. This time around, we're not protesting global capitalism. But Donald Trump's inauguration, and white supremacy, xenophobia, patriarchy, and violence vindicated by the Electoral College.

It's already happening. The pages on whitehouse.gov that discuss civil rights, disability, LGBT, and climate change are already down. James Mattis was already confirmed as Defense secretary and John Kelly at Homeland Security. Within an hour of taking office, Trump signed an executive order making mortgage insurance costlier, which CommonDreams called "a punch in the gut to the middle class."

What good is protesting the inauguration?

I'm here because sometimes it's more important to just be here, to be one of many, to show a wall of resistance. To say that whenever rights for the most vulnerable and marginalized are threatened, we will be there. To give courage and inspiration to my students who are Black, queer, Muslim, or undocumented who are living with an increasing fear of their safety. To show my neighbors in so-called "middle America" as well as colleagues in Haiti and elsewhere that there is an opposition to fascism. To defend our first amendment. To offer courage and spine, and a clear warning, to the Democrats, that they need to stand firm with the people who elected them and the majority of people who did not vote for Trump, and that they need to play their role in Congress to speak out, to question. That this is not, will not, and should not, be normal.

And yes, in part I am marching to join the pussyhats in affirmation that it's okay to be different, okay to dissent, and to build community with strangers from across the country and across the world that believe that if America is great, it is because of the courage of people like the disaffected poor in the Whiskey Rebellion; abolitionists like Gabriel Prosser, Denmark Vesey, Nat Turner, Harriet Tubman, Sojourner Truth, Frederick Douglass; first wave feminists like Elizabeth Cady Stanton and Lucretia Mott; civil rights campaigners from Ida B. Wells Barnett to Ruby Bridges to Assata Shakur; labor rights protesters from Chicago's Haymarket in 1886 to Huey Long to Cesar Chavez and Dolores Huerta; gay men and trans people, many people of color, fighting back the NYPD in Stonewall in 1969; people in wheelchairs disrupting congress until the Americans with Disabilities Act was passed in 1990; the American Indian Movement, Chicano Movement, the environmental movements; second and third wave feminists, including Black feminists and Third World Feminists. Some of these names are less known to history than Martin Luther King and the March on Washington. But as contemporary activists acknowledge, these struggles and legacies are intersectional. #NoDAPL, #BlackLivesMatter, and the Coalitions for Immigrant Rights are converging in analysis, strategy, in tactics, and in the DC Metro to be present tomorrow.

And so in the end this need to build community, to recharge, is in line with lessons I learned - the hard way - after Haiti's earthquake. That self-care is important, vital, to long-term struggle. Not to mention connection to community. Like hundreds of thousands of others who are coming, some cheering as their flight attendants saluted the pink hats, I'm here to charge my batteries.

Because this is going to be a long struggle.

And. We need to take this energy home.

After putting our own masks on, we need to remember that the struggle is local: with the one consistent theme in the nominees to run the government, to eviscerate what remains of the social protection state - call it Keynesian, "New Deal," or "welfare state" - access to education or health care, safety, protection from police brutality, protection from deportation, will all be fought locally.

So why are you here?

Mark Schuller is Associate Professor of at Northern Illinois University and affiliate at the Faculté d'Ethnologie, l'Université d'État d'Haïti. Schuller's research on NGOs, globalization, disasters, and gender in Haiti has been published in thirty book chapters and peer-reviewed articles. Schuller is the author or co-editor of seven books, including Humanitarian Aftershocks in Haiti and co-director / co-producer of documentary Poto Mitan: Haitian Women, Pillars of the Global Economy. Recipient of the Margaret Mead Award, Schuller active in several solidarity efforts.

Steve Bannon Is Key Player In New Cryptocurrency. What Could Go Wrong?