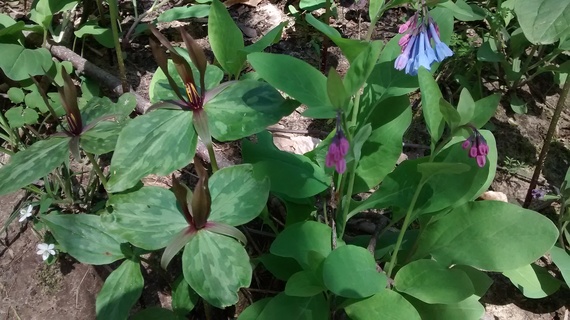 Sometimes when I'm talking with someone I know is religious, I'll ask them what God has been doing in their lives recently. Not infrequently I get a blank look in response. The idea that God might be affecting their everyday lives in discernible ways is a foreign idea. It's certainly true that our culture doesn't encourage us to expect God to be active in the world and to see God's hand at work. But what if God is interacting with us and we just don't know it? How can we wake up?*

Last weekend I joined about sixty other people on an expedition to Bluebell Island, a protected area known for its great spring display of its namesake flower. After braving crossing the river on a log, a large group of people spent a couple of hours scouring the island looking for a somewhat rare flower, the least trillium. Unfortunately, we didn't find it. Perhaps the Christmas floods had washed it to another place, or maybe it just decided not to show its face this year (as wildflowers will do). What struck me, however, was the enthusiasm and perseverance with which these pilgrims searched. Although they had no assurance they would see the flower, they expected that they might.

It's really hard to see something you're not looking for. Along this line I've read about a wonderful experiment that goes something like this. Researchers asked some college students to observe a room in which various colored lights would blink on and then off. Their task was to tally the number of times they saw each light. After repeating this a couple times the researchers would do it again, but this time with someone dressed in a gorilla suit crossing the room midway through the session. At its conclusion the researchers asked the participants if they had noticed anything unusual. Very few reported seeing anything different, let alone a gorilla. We tend not to see things we're not looking for.

We may not see God doing things in our lives because we aren't looking for him. For us God may be a wonderful idea more than an active participant in the world. He's the gorilla in the room. I think I first encountered an active God when, as a graduate student in my early twenties, my mother received a diagnosis of terminal liver cancer, with three to six months to live. At that time I was attending school eight hours away from home. As I prayed I told God that if he would heal my mother, I would write a mass we could use at our Catholic Student Center. During the course of her illness it just so happened that at every critical juncture I was home to support her and my father. I was even there when she died. Looking back on those six months I saw that everything that could have been done to mitigate the circumstances occurred and that the probability of that chain of circumstances occurring on its own was very low. Mom had little pain and six good months to say goodbye. I felt a loving hand throughout that time. In many ways she, and we, were healed of a painful situation. So, although she died, in gratitude I did write that mass.

Some people viewing that chain of events would chalk it up to happenstance. I saw it as someone helping us out at every step of the way. If God is irrelevant, then the former makes sense. If God is alive and active in the world, the latter does. Both attitudes involve faith - either a faith that God doesn't exist and therefore doesn't act, or a faith that God involves herself in the world and does act. Either faith is untestable. To a degree we will interpret events from the perspective of the world we believe in. And yes, we can fool ourselves into believing the world is as we think it is by ignoring data that challenges our faith. For those of us who believe in an active God we need to learn how to discern what things come from God and what do not. We also need to face head on the difficult things life throws in our path.

Both discernment and a maturing faith require us to be awake and listening - to expect God to be active and responsive, in often surprising and unexpected ways. The other day I heard the toads singing. Upon hearing a beautiful trilling song few people would expect it to come from a toad. They would go far down their list of potential animal contestants for The Voice competition before they came to the American toad. Yet, the toad it is. Similarly, we never know what God will use to sing to us. An active, loving God is always trying to get our attention. It's our job to develop a predisposition so that, when God is waving her hands trying to get our attention, we notice her. We need to allow God to find us. Look for a shy wildflower and listen for an unlikely song. It may help us find God.

*I will use both feminine and masculine terms to refer to God because God is neither one - God reflects both. It takes both male and female humans to help us understand the nature of God.

More about this author
Certificate in Contemplation and Creation Care
Center for Religion and Environment at Sewanee: The University of the South