It was by chance that the tour guide said: "And here is where the founder of double entry bookkeeping was born and raised." We were standing on the square of Dubrovnik, Croatia -- perhaps the most beautiful town in the world -- and being an entrepreneurship educator, I had to correct him.

All energized and eager to lecture, with my school teacher hat on, I began my monologue: "I am an educator and I want to correct you if I may: double entry bookkeeping was first invented in Milan by Luca Pacioli, the father of accounting, who was a Franciscan monk. He wrote the Summa de Arithmetica, Geometria, Proportioni et Proportionalita in 1494." Warming to my topic and speaking just loud enough so others could see how smart I was, I continued breathlessly, "Luca was living with Leonardo da Vinci, by the way, and was his math teacher."

Our guide, a lifelong member of Dubrovnik, smiling, let me continue on and on. When I was done with my speech on accounting history, I began to smile broadly at my own wisdom, looking around and nodding in self-satisfaction to my companions on the tour. He paused gently and said, "Yes Steve, but I think I am right. Check it on Google. His name was Benedikt Kotruljević, who was born in Ragusa or what is now known as Dubrovnik in 1416, on this very square."

He was so charming about it and self-confident that I sensed he was right, but I had to know for sure. Quickly I pulled out my handy iPhone and went straight to Google.

Ouch! He was right: The first recorded history of the description of double entry bookkeeping was done by Benedikt in 1458 in his work: Book on the Art of Trade.

Although only in a short appendix, it was the first description of what was as one of the world's great intellectual breakthroughs -- modern accounting. This craft enables merchants, entrepreneurs and their investors to keep track of every penny they received or spent.

Thanks to accounting, it allowed people to organize massive amounts of information into journals and then produces summary financial statements -- primarily income statements and balance sheets. The income statement showed, over a time period, total revenues minus total expenses, leaving either a profit or loss. The balance sheet was compiled at a point in time and illustrated the assets, the debts, and the difference in the owners' equity. These financial tools enabled the entrepreneurs to allocate resources more effectively. As an example, if the business person owned two restaurants, they could look at each income statement and seeing the profits or loss, they could determine which one to close and which one to invest more money in.

On a larger scale, trading ships were soon analyzed by income statements and more and more decisions began to be understood using the tools of accounting, leading to greater efficiency of capital, the savings of a society. Out of the income statement came the intellectual miracle of the return on investment (ROI) which allowed investors to compare investments mathematically with the simple ROI formula and soon after, the business community started to add risk to the analysis which was another game changer. An entrepreneur might ask: if we could make a $1,000 on investment A and a $1,000 on investment B, which one has the least risk thereby making the investment safer and better? This combination of risk and return into business analysis became the basis of modern business theory and decision making.

The balance sheet had a great effect as well. This intellectual tool shows how all assets are financed by simplifying accounting into a simple equation: Assets = Liabilities + Owners' Equity. Essentially, the equation shows that everything owned can be financed with either debt or equity, or a combination of both. With this simple intellectual insight, as powerful as E=hv( Planck's equation)owners, workers and entrepreneurs were able to begin to value their assets more accurately and to sell them to others for what they were worth. People began to make better and wiser decisions and became more financially literate. As markets grew around the world, wealth began to be created on a scale never seen before, lifting millions and millions of people out of poverty.

I knew I had learned something new about business history in Dubrovnik and that I had to write about it. Bravo to both Luca and Benedikt. 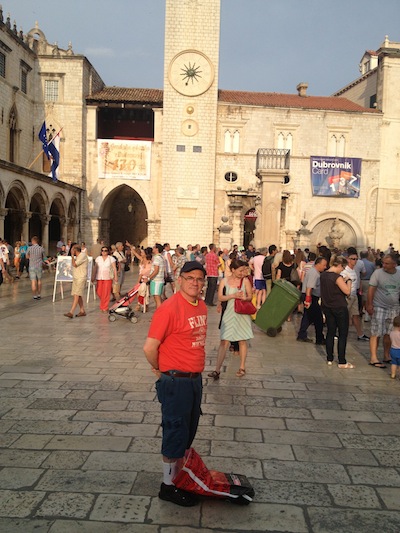 Author in square of Dubrovnik where creator of double entry bookkeeping was born.