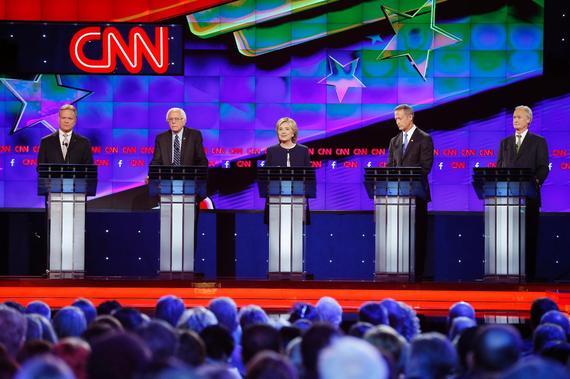 The five Democratic candidates for President stand on stage at the Wynn Hotel & Casino in Las Vegas for the first Democratic primary debate, hosted by CNN and Facebook. (Photo credit: CNN)

A presidential primary debate should be a proud symposium of ideas. A profound series of respectful arguments among ideological companions for the chance to be their party's standard-bearer in a massive and historically gorgeous democratic exercise. And that was exactly what the Democratic candidates for the highest office in the land presented the nation's screens with on October 13th.

Seriously though, while the Democratic Deba- oh, whoops -- sorry, the #DemDebate, as the media insisted we call it, as if we were referring to a millennial wedding or the Walking Dead season premiere -- wasn't exactly the most refined discussion of the issues, they've got nothing on the Republicans, who instead seem to have opted for the Trump-patented "two-to-three-straight-hours-of-monkeys-flinging-fecal-matter-at-each-other" method of debate.

Still, the candidates were prepared and (mostly) articulate, and people got excited to finally get to see their candidates get to duke it out on the national stage. 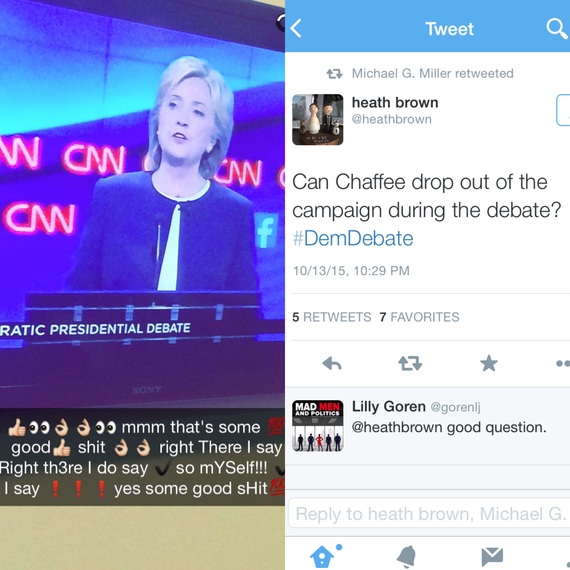 Some were more excited than others, granted.

Hillary Clinton stood defiantly at center stage and successfully parried her opponents' attacks from left and right, a frontrunner through and through . Bernie Sanders showed off just how a democratic socialist from Vermont straight-talked his way to being the rapidly rising underdog of the race. Martin O'Malley spoke eloquently, but generally left no doubts as to why his poll numbers generally seem to be on par with 2% milk. Jim Webb reminded us that he once killed a guy in the gruesome days of Vietnam, and that he once stood there for 10 minutes trying to speak during his attempt at relevancy during this debate (the former Senator was, however, unable to remind us of his own children's names without having to think about it). And Lincoln Chafee reminded us all that he, well, exists, I guess. And looks like the lovechild of an old turtle and Gollum from Lord of the Rings. 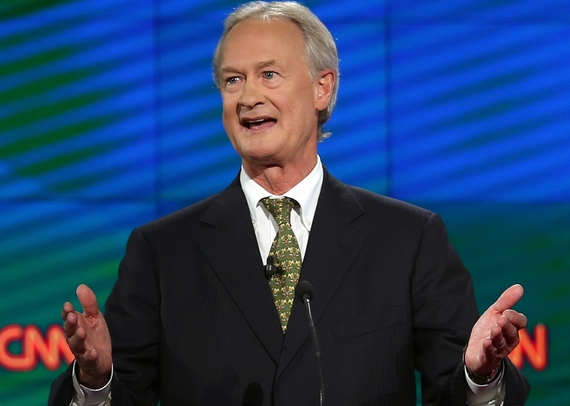 But, to answer the question you clicked on, Reader: who won the debate?

I'm going to try to avoid expressing my own bias too much here. Yes, I do possess a bias towards a particular candidate, but every single journalist at every single media site does, so don't forget that as you read up on the campaigns. Personally, I think none of the candidates "won" the debate -- very rarely are debates like these actually won. Donald Trump certainly won the first Republican debate, probably the second as well, simply because his presence dominated that of any other candidate so incredibly thoroughly that the entire thing became The Trump Show, and was advertised and covered by the media as such. Did anybody even come close to that sort of star power at the Democratic debate? Well...

According to writers at The New York Times, The Washington Post, The Los Angeles Times, The (Murdoch-owned) Wall Street Journal, and POLITICO, Hillary Clinton owned that debate. She destroyed, nay, annihilated, her opponents. Bernie Sanders's decapitated head is mounted on a pike outside her campaign headquarters in Brooklyn. Joe Biden woke up in a cold sweat, regretting he ever even thought about running for President. Rubio, Trump, and Bush cried themselves to sleep. Rumor has it that Carly Fiorina is getting a sex change, just to avoid even touching the untouchable -- Hillary's absolute dominance over the status of "first female president". Women want to be her, men want to be with her, Obama's retiring early, he's canceling the election, they're giving the entire country to Hillary because she was just. That. Good.

All jokes aside, the media as a whole seemed a bit rushed to crown Hillary the winner of the debate.

The numbers tell a different story, however. Polls on the very same websites that declared her the winner turned overwhelmingly in favor of Sanders. While that might be attributed to Sanders's viciously active gang of supporters on social media, the kind that post #FeeltheBern in comments like they've got some sort of democratic-socialism-based Tourette's Syndrome, data shows that the voters in the "Bernie bubble" weren't alone - Bernie was making more waves online than any other candidate. He gained more Twitter and Facebook followers than all the other candidates combined, his plea for people to understand the meaning of socialism caused searches on the definition to skyrocket (even though people were going to find a good definition of his beliefs anyway), and the Google searches of him and his positions dominated among the five candidates: 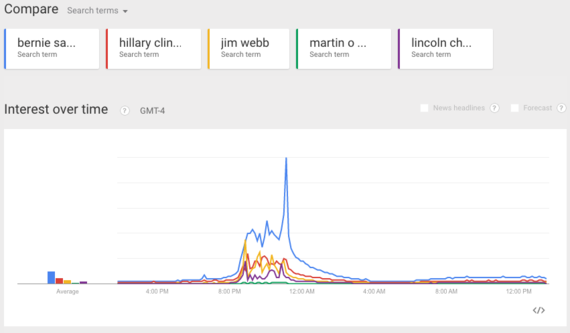 All of these together are, of course, a fraction of the searches for the Independent candidates "is lady gaga a man", "justin bieber penis" and "blood moon what is it".

So is it Bernie who won, and not Hillary? Not really. None of the candidates delivered particularly wowing performances, and there were cringe-worthy gaffes to spare. Minutes after criticizing Hillary for having bad judgment, Lincoln Chafee implied that he voted to allow big banks to merge because he'd just inherited his Senate seat from his father and didn't know quite what to do, somehow managing to put "child of rich political elite", "hypocrite" and "stupid" in my mind at the same time. Senator Webb's tirade against affirmative action was a proud proclamation of what basically came across as: "You know who doesn't have enough of a voice in America? White people." Hillary danced sloppily around Anderson Cooper's questioning like a child in a school play, blatantly refusing to say why she thought Senator Sanders's plan for universal healthcare was wrong, or that it was wrong at all. Bernie refused to thoroughly address concerns about his electability, his closeness to the socialist movements in Nicaragua, or his honeymoon in the Soviet Union. O'Malley's defense of his tenures as mayor of Baltimore and Governor of Maryland was flimsy. If anyone won, it was Anderson Cooper, in only for his fantastic, thorough and consistent questioning of the candidates.

The people got the debate they expected, Bernie vs. Hillary -- the other candidates appeared to be an afterthought, a formality, a might-as-well. But, as one of those afterthoughts said in his closing statement:

"On this stage you didn't hear anyone denigrate women, you didn't hear anyone make racist comments about new immigrants, you didn't hear anyone speak ill of anyone because of their religious belief. What you heard was an honest debate of what will move us forward, to lead to a clean electric grid by 2050, and employ more of our people, rebuild our cities and towns, educate our children at higher and better levels, and include more people in the economic and social life in our country." 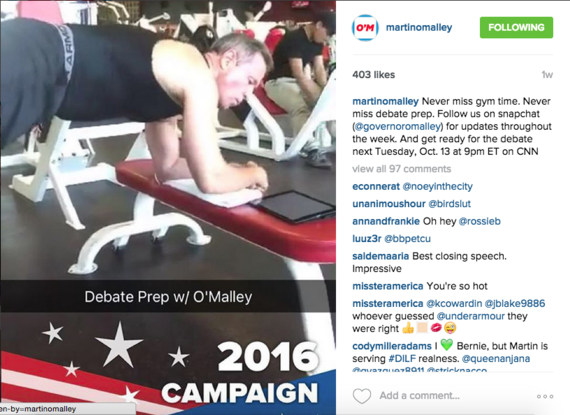 Maybe O'Malley came up with those lines while "serving #DILF realness".

The Democrats were civil. They were not the Republican ratings-game circus freakshow debate. The candidates onstage presented a new Democratic agenda that was outspokenly and brazenly liberal, far from the days of a cautious party, afraid of "liberal" as the contempt-laden insult it had become. Who "won", if anyone did, does not matter. The ideas matter, not the flabby old white people they are packaged inside of. They are prepared to offer, as Lord Supreme Debate Commander Clinton called it in the pre-packaged buzzword soundbite of the century, a New New Deal. Whether or not the nation will take them up on that deal remains to be seen.