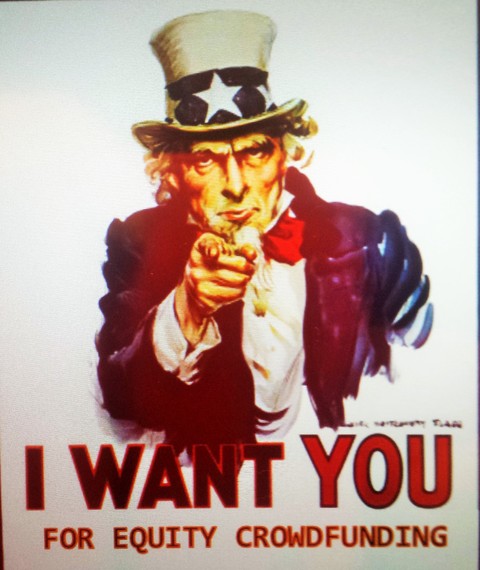 If anything, May 16th, 2016 should be opened with the ringing of a bell, similar to the one at the New York Stock Exchange (NYSE), because that date symbolizes the opening of a new era when non-accredited investors, aka Main Street, will have the legitimate right to participate in equity crowdfunding.

Thanks to the Security and Exchange Commission (SEC), highly anticipated Title III rule named "Crowdfunding" under the JOBS Act becomes effective on that day.

This means, from then, you will be allowed to invest via special FINRA-registered platforms and brokers in privately held companies and become their equity shareholder. The investment amount is capped by the SEC at 5% of your income if you are making less than $100K per year or 10% if you are making more than $100K.

I was one of the early supporters of the JOBS Act and its Title III but there has been so much pessimism lately about going forward with it that it feels like we all got hit by a wicked instruction which now allows swimming beyond the buoys and crossing the street on a red light.

I certainly foresee a big wave coming. I am already receiving so many pitches from companies claiming to be "the-next Facebook" that I can only wonder what my inbox might look like after May 16th. And you might think about yours too.

So the big question is: who is going to invest?

It is almost too easy to open up a lengthy discussion about why private investing in early stage companies is risky and that's what equity crowdfunding entails.

You can simply start educating yourself by Googling "why 95 percent of startups fail" or reflect on why there are only 317,000 angel investors backing young ventures - which is just 3% of the existing pool of accredited investors here in the U.S. (BTW, according to the data, they typically invest in startups not more than 10% of their income).

There are dozens of studies, many with nerve-wracking names, consisting of wordy passages such as "cross-sectional variation" or "idiosyncratic risks in private equity due to its illiquidity and infrequent cash flows" which I personally had to go through to deliver you the following groundbreaking conclusion: Yes, it is very risky.

Wait - there is some hope emerging from that heart-breaking chart by Mashable which was recently widely circulated on social media. It is the one when you clearly see the missed opportunity to have made $239,000 if you invested $1,000 early in Amazon.

So I did some very causal calculations on the probability of the emergence (and spotting) of another "Amazon".

As of the date of my writing, the total number of unicorn companies (companies valued for over $1 billion) is 154. With 400,000 new businesses launched each year, they represent 0.0004%.

Now take into consideration the sensible assumption that not all of these unicorns will actually make it to the finishing line, aka IPOs therefore becoming "zombie enterprises".

And multiply it by another variable: the probability that "elite" startups - the type run let's say by the former PayPal employees known as the "PayPal Mafia" (Uber, Airbnb, YouTube, LinkedIn) will actually choose an equity crowdfunding path.

The devil is in data. And if you look at the recent data coming from public markets, you'll see that the investors are dumping stocks and moving to cash levels not seen since the financial crisis. Why I am bringing that up here?

Because the data confirms - equity of, for example, newly public, high tech firms generally is more than five times as risky as the public market.

Did you hear my phone ring? Morgan Stanley has called and suggested to put a small incremental amount in mutual funds, preferably something solid like an S&P 500 Index Fund.

The slow death of American entrepreneurship

There is another nuance I wanted you to think about. While you might be aware that business startups have been declining steadily here in the U.S. over the past 30 years, the most depressing fact is that since 2008 American business deaths actually outnumber business births. The fact is - while 400,000 new businesses are launched every year, 470,000 per year are dying.

And while I recognize that the entrepreneurial entrance hurdle has never been so low and some folks should not start businesses in the first place, the death rate of over 1,280 businesses per day is a frightening number and for the past few years we have launches versus closures at minus 70,000. WTF is going on?

If we are living in an environment when small businesses - the real engines of the economy and job creators - are dying faster than they are being born, you start to wonder what's wrong with the financing system that is meant to exist to deliver the oxygen for new ventures.

And you probably wonder who is going to back such ventures.

Well, I have an answer for you - the crowd.

Seriously, who else do you think is available? The way things look right now is that the finance industry is too busy to finance itself: to earn profits from the speculative investments in financial assets is easier than from investing in the real economy. Especially if it has access to everyone else's retirement account. Just read the new Wall Street bestseller by The Big Short author Michael Lewis, Flash Boys. It's enlightening stuff.

They say you will never know what your principles are until they become inconvenient to you. Despite the facts, I must warn you I am still very much biased on equity crowdfunding.

You might ask why I am talking so much about risks then. It is because my friends - lawyers - told me so.

I believe wiring the public finance and investment possibilities via the Internet is a very natural - and crucial step in the new digitalized economy. Three key points here.

First, entrepreneurs with a workable business idea should be able to turn their customers aka followers into shareholders. Second, the high level of liability imposed by the new rule to the platforms, aka "gate-keepers," should ensure the integrity of the game. Finally, the current emergence of alternative venture exchanges - if done properly - should help with liquidity ultimately making Wall Street sucking money out the system as irrelevant as the cassette tape recorder.

The new financing approach is desperately needed and the potential of the new industry is truly remarkable. Let's run some numbers.

We have 245 million people over 18 (Census data). According to Gallup, 55% of the population are investing in stocks/bonds/IRA - so let's assume we will have the same category of people who would like to try investing via equity crowdfunding and add to their portfolio crowdfunded ventures so we are down to 135 million.

Assuming that each of them would invest on average $1,000 per year, we are witnessing the birth of a $135 billion industry.

Given the fact that both angels and VCs have been investing in total around $80 Billion a year (2014 and 2015 numbers) it is safe to assume that non-accredited equity crowdfunding is set to fill the essential gap in the entrepreneurial finance and become the driving force in providing equity for the US startups.

How to invest? At this point I have the following list of platforms that are in the game: StartEngine, SeedEquity, WeFunder, EquityNet, LocalStake (there are rumors that Indiegogo might jump in as well - stay tuned). We also have royalty based crowdfunding platforms - please read my previous article here.

The remaining question is: why to invest? I would like to stress: investing is not gambling, gambling is not investing - know the difference. For mainstream financial assets, such as equities or bonds, measures of returns and risks are relatively simple to construct and well-understood. Do your homework and learn - check out, for example NextGenCrowdfunding for some educational videos. And feel free to reach me out. Measuring the health of a business when investing in it is certainly my department.

My hunch is that equity based crowdfunding will be labelled as "passion investing" and most likely we will see the pitches coming from the companies with some cool but probably not exactly viable products, early stage companies focusing on local/niche markets and pre-revenue companies that would like to collect pre-sale orders in exchange for equity.

Time will show us what works so at this point I would suggest you to look at equity crowdfunding not from the position of asset allocation and diversification but rather as a fun way to get into a private investing game which can give you the ability to learn how to do your own due diligence, feel engaged, relevant and - what the heck - to contribute in job creation. Why mentioning jobs?

Per data I have collected, there is one job created per each $21K of angel investment. Now you can do your own math. And your own choice.

And remember that bell? It tolls for us...