A few months ago, as I sat alone in a three-bedroom apartment in Cantù, Italy, a small town outside of Milan, I scrolled through my Instagram requests. Something stood out to me that I'll never forget. A young girl, who looked about 14 years old, requested to follow me. I often get requests from teenage girls because, let's be honest, those are the only people who still watch My Super Sweet 16 reruns on MTV and come across the almost decade old episode featuring my 16th birthday party. Usually, I approve as long as the page doesn't look creepy and go about my business, but as I read the young lady's bio, I stopped. It read: this school, that city, emoji, emoji, whoever's bestie, "future basketball wifey." When I read the last three words months ago, I couldn't help but wonder who in their right mind would purposely seek out this lifestyle and as I think about it now, I wonder the same thing. 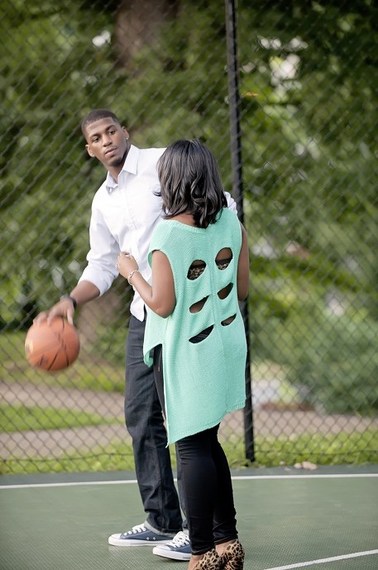 Being alone is something that I became accustomed to when my husband began his first season playing professional basketball overseas a year and a half ago. When we were in Italy, I was alone when he traveled to away games (sometimes for as long as five days at a time). I was alone when he went to practices and team events. I was alone when he slept until the late afternoon on his (few and far between) days off because he was mentally and physically drained from playing two basketball games each week. I was also alone when he simply didn't feel like talking because he was stressed about his limited playing time or about a bad game. Even when people surrounded me, I was alone because of the language barrier. This season, we are living in Chiba, Japan, and the situation is exactly the same. Without friends or family here, I've gotten to know myself better than I ever thought possible and watched more TV series from start to finish than a normal person would watch in a year.

I would love to say that loneliness and isolation only come with being married to an athlete that plays abroad and that life would be easier if he played in America, but having also experienced that, I can honestly say that while it is different, it comes with a unique set of challenges. My husband played in the NBA and the NBA D-League, and both come with their own stressors such as groupies, call ups (or lack thereof), trade deadlines, cuts and, again, being forced to spend a great deal of time alone because your mate is either traveling, training or mentally and physically exhausted. These are only a handful of the issues that come along with being in a relationship with someone in this industry. Add to these the volatility of not knowing what city (or country) you will be living in year to year and often having to choose between spending holidays with your family or your significant other, and I bet you can see why this lifestyle isn't all it's chalked up to be.

When you're married to a professional athlete, the sport literally impacts every single aspect of your lives. For example, as newlyweds, my husband and I often discuss having children. But, when? To ensure that I delivered during the off-season so that he could be there to witness the birth of his first child, we would have to plan conception to the tee. On top of that, because he plans to play for at least another 10 years, he would miss a great deal of his child's life with his constant traveling. Plus, if he were still playing overseas when our child reached school age, we would have to determine whether or not to enroll our little one in an international school abroad or spend months at a time separated so that I could remain at home and he or she could attend school in the states while my husband spent the basketball season alone in another country. An already complicated life decision is made ten times more complicated when you take into account all that comes along with being a professional athlete's wife.

Now, I would be lying if I didn't admit that there are things that I absolutely love about this lifestyle. First of all, the money is great. We have been able to save and give back by establishing our own nonprofit organization, the JetJones Foundation. Also, I don't take for granted being able to travel the world and learn so much about other cultures with the man I love by my side. Moreover, I look forward to every summer when my husband gets two to three months off (as opposed to the two weeks or less of vacation time he would likely get if he worked a "normal" job) that we can spend traveling and catching up with friends and family. But, in this lifestyle, sometimes I feel like I live for the summertime. We got to Japan in November, and although we really like it here, we've been counting down to our return home since our arrival. We've missed holidays, weddings, funerals, birthdays, graduations, and countless other family events in the time that we've been away. On top of that, the 14-hour time difference makes it difficult to keep in touch with friends and many of our relationships have suffered because of it. Are the few advantages really worth all the sacrifices?

I have no regrets when it comes to who I chose to spend my life with, our relationship, or the experiences we've had living overseas as newlyweds. Our lifestyle has inspired me to create my blog, establish a travel itinerary planning service, launch a t-shirt line, and do so many other things that I never thought I would. But, I also recognize that I've sacrificed a lot for my husband's career and realize that the reason that I'm OK with those sacrifices is because I married for love and I get to spend my life with a man that I know is my soul mate. If I had married for any other reason, especially because of some glorified image I had in my head of what it would be like to be a basketball wife, I would be horribly disappointed. I hope teenage girls everywhere aim higher than becoming the future wives of professional athletes. How about "future lawyer's wife," "future doctor's wife," or "future first lady?" Or, even better, how about young ladies focus on getting stellar educations, eventually marrying people that they love unconditionally, and becoming the future athletes, lawyers, doctors and presidents themselves?

This post was adapted from a piece originally posted on LiveLifeWellBlog.com

Allison is the founder of LiveLifeWell, a lifestyle brand created to inspire women to be well dressed, well educated, and well traveled. Follow her journey on Instagram and Facebook, check out her LiveLifeWell branded apparel line, utilize her travel itinerary planning service to plan your next trip, or join the LiveLifeWell movement by subscribing today.