President-elect Obama's plan to put a million electric vehicles on the road in 10 years is doable and should be surpassed by its own momentum. As people discover the many advantages of electric vehicles (EVs), this momentum will build. Not only are these cars green and responsible, they also enhance National Security. From all we've been told about EVs we know a little. They are cleaner. We've heard about plugging them into our homes to recharge overnight. But most of us don't know much about electric cars yet.

The momentum of the Electric Vehicle Age will stem from enhanced performance, smoothness of acceleration, quietness, and superior control. The way an electric car can be tuned to behave a certain way for a certain driver allows for a whole new feeling in the driving experience. People just don't know how cool these cars are.

Existing designs can be manufactured as electric cars with no change to the tooling of the existing designs. Adapting kits are possible. Build electric versions on these existing tools to keep people working and get people interested in buying again. The technology to make these new electric vehicles exists today right here in this country.

From Wichita, Kansas we get this report: A 1959 Lincoln Continental repowered to be a self charging electric vehicle by a small group of engineers and local services, is now achieving up to 65 mpg in informal tests. Work there continues. The goal of the project is to attain up to and beyond 100mpg for the biggest and heaviest car made in 1959. The car has been driven in California and Kansas and shown to over 15,000 people. In an audience of 12,000, one tenth of the people raised their hands when asked if they would like to have a car like that. That Lincoln represents a future for Detroit. It is the possibility of Big Clean cars that do not promote Global warming. Let's build them now, as well as economical small clean and green electric cars and let's put people to work. We already have the existing tooling and the facilities and manpower.

From Detroit we get this report:

We have devoted significant resources to this project: Over 200 engineers and 50 designers are working on the Volt alone, and another 400 are working on related subsystems and electric components. That's how important we think this is, and that's how much stock we place in the future of extended-range electric vehicles like the Chevy Volt.
- Tony Posawatz, Vehicle Line Director - E-Flex Systems and the Chevy Volt, GeneralMotors Corp.

The GM, FORD and Chrysler CEOs then each boarded private personal business jets to be paid for by taxpayers money, and flew to Washington to ask tax-payers to give them a 25 billion dollar infusion to save hard working American's jobs. Have they changed direction but it's just too early for our senators and congress representatives to see it yet? I don't think so. Maybe introducing a new high-performance fossil fueled Shelby Mustang and jumping into a private jet to go to Washington for a bailout was not such a good idea.

Efficient technology can power the existing designs we have today.

We don't need a car that looks different with a new sunroof over the back seat creating an air conditioning challenge as a feature.

We need kits to adapt what we are currently making to today's demands.

We need new thinking from new leaders and we need new perspectives from unions.

Today the news is Hybrids. Everyone is making them. Some of these hybrids offer very poor mileage in the 20-30 mpg range. They may be already on their way out because of the inherent inefficiency of their design. An electric motor and an internal combustion engine both driving the wheels in one car may not be the most efficient approach. Forward thinkers are wondering about that inefficiency and working on ways to solve it. Plug-in kits are now available for Prius and Ford Escape, allowing these vehicles to plug in for a re-charge, increasing their efficiency and reducing their negative impact on the environment. Plug-in hybrid electric vehicles (PHEVs) look like the future, but are they the future?

There are huge limitations. The battery is the biggest. An average EV is only good for a short trip before it needs a charge. Maybe 40 miles or so is a good estimate. Some electric cars get a long range like 100 miles before they lose power and have to recharge. The Tesla (a super light sports car) goes over 150 miles on a charge. Two things that all basic EVs have in common is they are small in size and they have to stop and re-charge. If you run out of power you are down. Just like gas.

To re-charge, you need a power source. It may be your home, or it may be your parking garage at work. It might be a charging system that is privately owned and is a business enterprise (Better Place), or it may be a public utility service (PG&E). You may have a cable to plug in that identifies you so your account can be automatically charged. One thing is for sure. You need to re-charge. So you are going to be more conscious of your energy use.

Not every EV has to plug in. For some, it's optional. Cars like the Chevy Volt have an onboard generator to re-charge batteries or power the car. These cars are Self-Charging EVs (SCEVs). That means on long trips you use gasoline. A long trip is over about forty miles in a Volt, on level ground. When the battery starts to die, an onboard generator rescues it and powers the electric motor, while slowly recharging the battery. This sequence cycles on and off while you take a long trip. Mostly the generator is on... using gasoline, a fuel widely seen as a National Security disadvantage. The Volt generator will charge the batteries faster if the car is not moving, by using gasoline. On short trips, you won't even use the generator. You will go the first 40 miles on plug-in power. An average commute in the USA is about 35 miles.

Efficiency in the self-charging electric car is the big decider. If the efficiency of your charging system allows you to make electricity with less financial cost than buying it from the grid, then your car can power your house and turn the meter backwards to reduce or eliminate your electric bill. Potentially, you may even be able to sell electricity to the grid someday. That would be a good reason to buy a SCEV with a highly efficient self-charging system. These cars are mobile power plants.

Big electric cars are left out of the story so far by major manufacturers. They have made some very poor hybrid SUVS. SUVs, big sedans, pick-up trucks are all by the wayside. They have been relegated to dinosaur status. But don't count them out. A big Self-Charging SUV with a super efficient self-charging system would create enough power to support 6 homes. You could be part of a distributed power system by using the grid backwards, selling power back to your Utility Company. In this approach, power enters the grid from plugged-in vehicles, avoiding the loss found in the lines when power comes to you from a central Power Plant located miles away. Imagine a big electric car that earns you income.

But you just wanted a big electric car. You may be surprised to know why size is important. Big SCEVs, while taking big power to run, and requiring large battery banks and big electric motors, will undoubtedly be getting up to 100 mpg or more in the near future. A big developmental car, Lincvolt, seen at Lincvolt.com , is proving this technology. Big SCEVs may well be earning you money while you are charging the grid. They may be recharging with super efficient self-charging systems, and even using Domestic Green bio-diesel fuel, a fuel that does not contribute significantly to Global Warming. Big may be an unexpected Green alternative. 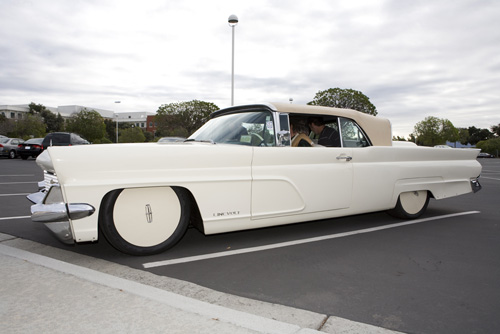 Read more opinion from HuffPost bloggers on the Detroit bailout