"Look, Mom!" my 13-year-old son Sai announces in a hushed yet excited tone. His eyes grow wide as he nods his head toward a teenager walking by. "Those shoes are the Gamma 11's," he whispers. "Did you know there are two Gamma 11's, Lebrons and Air Jordans?"

Ok. Who is Lebron? What is my son talking about? Why is he always pointing at people's shoes and describing them with weird words like bred gamma rho 26's? What is that code for?

My son says he's a Sneakerhead. What exactly does that mean?

From what I've noticed it means he's always trying to think of ways to earn money so he can buy a new pair of shoes, he emails me pictures of brightly colored shoes he designs on a website called NikeID, he has a sketch book filled with sneakers he'd love to own and he spends hours on Instagram and Youtube following people who post pictures and videos about -- of all things -- shoes.

Video games I can understand. Model airplanes make sense. But, sneakers, the ones that cost upwards of $100 a pair -- what does that say about my son? Will this interest lead to anything that will actually benefit his future? Am I the only parent asking myself these questions? Is this the beginning of his demise and if so, is there a cure?

Sneakerhead In The Bay 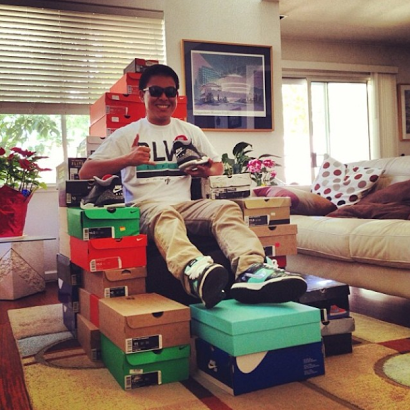 When Macklemore, a Grammy-winning rap artist, writes the song 'Wings' an ode to his love/hate relationship with sneakers, you know that there is something deeper than the 10 inches of rubber and canvas that we see our children fawning over. Is it love?

Yes it is. Well, according to 17-year-old Alex Walter who is known on Youtube as SneakherheadInTheBay. With more than 23,000 Youtube subscribers, Alex has established himself as an expert on sneaker customization and maintenance, ranking among other highly notable Sneakerhead Youtubers like Dubstepslap415 and YoAnty.

Alex, a high school senior in San Jose, California fell in love with his first pair of "collector's edition" shoes about five years ago when he snagged the Nike Sb Ms. Piggy's for only $30 from a friend who was selling his inventory of shoes. He defines a Sneakerhead as a person who has a passion for shoes.

"This passion may be derived from the culture or historical factors sneakers hold within," Alex shares before adding. "A Sneakerhead is not defined by the amount of shoes a person has."

How can a teenager afford to become an expert on customizing and caring for shoes that many adults can't afford? Alex admits that he doesn't have an official job right now but as his love for sneaker care grew, he learned about customizing sneakers and his experience has offered him a pretty sweet income from customizing shoes for others.

Alex is doing quite well for himself yet other teens may not be as lucky. According to Alex, it all boils down to effective parenting. He warns parents to never buy a pair of shoes for children who want to be in the sneaker scene.

"Their children need to find something to do to pay for such an expensive hobby," Alex says. "That is how my parents were with me, and now I don't rely on them for money at all. If everything was given to me, I would not be where I am today." 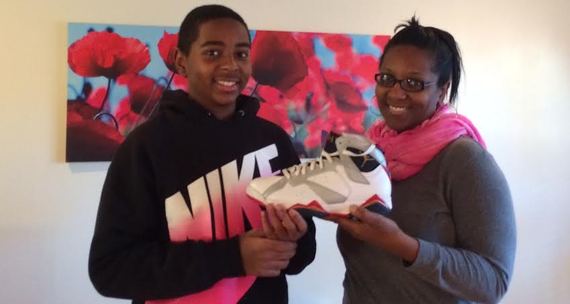 "Malcolm's father has a collection of sneakers that is comparable to some of the biggest collectors out there," Lawson admits.

Her 8th grader owns more than 26 pairs of shoes and over the past three years, Lawson says Malcolm and his father have probably spent between $16,000 and $20,000 on shoes alone.

Although their shoe budget could equal a year's salary for the average person, Lawson says her son isn't a spoiled brat. In fact, Malcolm earns money by working with his father at the gym he co-owns and is consistently buying, trading, and selling his sneakers in order to upgrade his collection.

Malcolm received a pair of Nike Roshe Runs a couple of weeks ago, but that wasn't the biggest thrill of his life. One of the proudest moments of Malcolm's life happened one sunny afternoon.

"I took him to meet a friend from school at our local park," Lawson recalls. "He sold him a pair of used Jordans for $150. He loved making that sale!"

From sales to negotiating, budgeting and marketing, D'Wayne Edwards, former footwear design director for the Nike Jordan Brand, believes that intelligent Sneakerheads who are involved in buying, re-selling, trading and collecting sneakers are unknowingly grooming themselves for future business success.

At 44, Edwards lives in Portland Oregon and is the founder of Pensole, a footwear design academy that offers talented young design students the opportunity to learn from the footwear industry's best designers. Graduates of this exclusive design program often become prime candidates for cultivation by the top name brands in footwear.

Edwards, who began his career as a young kid sketching sports figures who later went on to design shoes for Michael Jordan himself, encourages parents of children who are passionate about sneakers to guide them to pursue their interests professionally, even outside of sneaker design.

Edwards maintains that essential business skills are honed by the avid shoe collector. The collector must learn how to balance a budget, negotiate with sellers, do research and analyze costs, which are significantly valuable skills that can be naturally transferred to other industries.

The founder of SneakerFreaker.Com, casually known as Woody, pours his zeal for all things sneaker-related into his popular website and community for sneaker enthusiasts. With 40,000 daily visitors to his website, Woody, who now has three children of his own, has turned his life-long fervor for sneakers into a full-time business.

Woody believes that children are attracted to acquiring the newest and best sneakers because the child receives the respect and admiration of his peers which translates to a feeling of self-worth.

"Sneakers, like any element of fashion, become part of your identity," he says." Give a kid a compliment and watch his confidence soar." 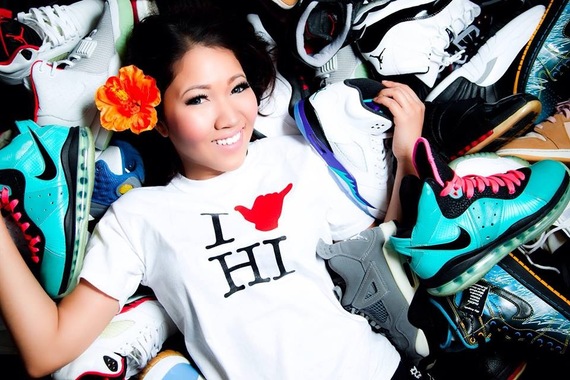 Tasha is one such young woman, an admitted female sneaker fiend who says she will never stop. Born and raised in Hawaii, Tasha explains, "You don't quite know that your child is a sneaker fiend until about the sixth pair. If they keep going into 60, then you know it's real."

Although Tasha has been a sneaker collector for more than 10 years, during those early years her Mom did not understand her interest. Instead of rejecting her daughter's inclination to have and to hold the latest sneaker, the two camped out together for a limited (sneaker) release and the experience helped them to bond.

A parent's first reaction to a child's interest in sneakers will probably be to lecture them about shoes being a waste of money but Tasha pleads with all parents to hold off on the lectures because this particular passion could pay off big-time in the end.

"A good friend of mine recently had to raise money for a medical procedure his mother needed," Tasha shares. "He raised $3,000 in a week by selling off just a few of his most rare and valuable sneakers. How's that for a 'waste of money'? Some might see sneakers with a better ROI than stocks these days."