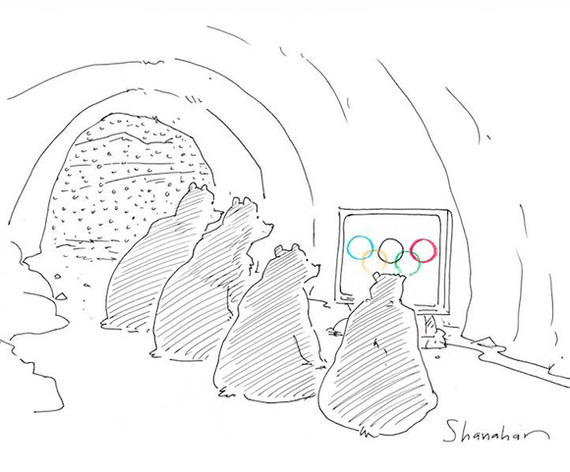 "Of the 19 cities which have already hosted the Winter Olympics, as few as 10 might be cold enough to host it by 2050, and only 6 by 2100...As an Olympian, that's a scary and sobering thought." ~ U.S. Ski Team member Andrew Newell

The Atlantic: Do the Winter Olympics Have a Future in a Warming World?

"In a substantially warmer world, celebrating the second centennial of the Olympic Winter Games in 2124 would be challenging...You can't ski safely or successfully in slush."

"Those trends are likely to continue into the next century. Research presented at the American Geophysical Union Meeting in December that looked at 18 ski resorts in the western U.S. found that by 2080, temperatures are likely to increase at all resorts and snowfall is likely to decline by more than 75 percent at 10 resorts while increasing at only four."

Grist: Winter warriors: As Sochi heats up, will athletes turn to climate activism?

"In the meantime, mother nature is making statements of her own. Temperatures in Sochi hovered in the 50s early in the week. Monday's practice runs in the half pipe were postponed after snowboarders complained of the slushy conditions...On Wednesday and Thursday, the mercury soared past 60 degrees. Practice runs on the ski jumps were cancelled because the warm temperatures made the landing hill too dangerous. Nordic combined racer Billy Demong said the snow was so awful it felt like "skiing on a layer of fur." Meanwhile, officials dipped into emergency snow caches to shore up racecourses, and there was a rush on salt, which is being used to firm up the snow."

Time: Climate Change Will Make It Too Warm for Winter Olympics

"Winter Olympians are well aware of the threat that climate change poses to their sports. In April 75 Olympic medallists in skiing and snowboarding sent a letter to President Obama, urging him to take stronger action on climate change. "Without a doubt," they wrote, "winter is in trouble." And if climate change is bad as we fear, so are the Games."