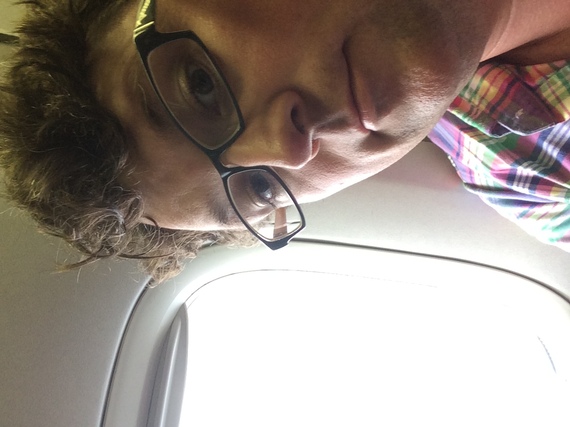 This post is really about the Confederate battle flag. But it starts with a story about the time I lived the exact same day twice in a row -- July 7th, 2015. No, I'm not stealing the plot from the Bill Murray movie, Groundhog Day. I simply flew eastward across the international date line precisely at midnight.

After a short teaching stint in Seoul, South Korea, I flew to Honolulu, Hawaii. I left at 10:30PM on July 7th, 2015, after a full day of work. Oddly, I arrived in Honolulu at 10:30AM on July 7th, 2015, and relaxed all day at the beach with Catherine, my wife. They were two very, very different days... and yet, they were exactly the same day. The picture above shows me arriving in Honolulu for my second July 7th.

This weirdness is all due to the international date line. (This video explains how it works.) From one perspective, the date line is arbitrary: there is no actual line in the water, and nothing funny happens when you cross it. In fact, there was no such thing until people simply drew a line on the map. And the complicated history of the date line shows that people have at times been able to change it, and get the rest of the world to follow along, for different reasons.

Yet you could also argue that it wasn't entirely arbitrary: European empires created and altered it. The line was 180 degrees from Greenwich, England, which the British empire's maritime charts counted as the center of the world's time and space. Britain had both the colonial ideology and the military power to enforce the centrality of Greenwich time on the world's merchant fleets. So every thousand miles or so from Greenwich, the clocks would move one hour further from Greenwich time. But you can't keep adding hours without the problem of different days coming into play.

There simply has to be a place where people switch to the next calendar day exactly opposite the zero-point for time. Otherwise, it would cause serious havoc on any attempt to keep track of time across the globe. We need them, but the zero-point and the date line could quite literally be placed anywhere on the earth. There is nothing in the natural world that forces us to put the date line in the Pacific.

This shows us that time is a social construct. People make decisions about how to measure and describe time, and it could be otherwise.

And yet: social constructs are not entirely arbitrary. You can divide up the time that it takes for the earth to make one revolution in different ways, but you can't control how fast the earth rotates. There are real things that people can't change, no matter how hard they try. In the case of the international date line, the rotation of the earth and it's path around the sun, the actual passage of time, the velocity of human transportation -- these things are the same no matter how you decide to label them.

So: the date line is an arbitrary, human-constructed solution to a real problem. But we have the current arrangement because of some very real, non-arbitrary historical phenomena, like Britain's imperial dominance. It's arbitrary -- but then again, it's not.

The very phrase "social construct" means that you can't choose arbitrary social things all by yourself. Well, I suppose you can, but then people won't understand you. An arbitrary 24-hour day works only because everybody else is doing it, too.

Lots of people have been talking about changes in social constructs like race, gender, and economics. But the conversation is often confused. These things are indeed constructed, but they have histories inflected by power and heavily interested parties desperately trying to hold the lines where they are. And all of these social constructs also have some hard-wired aspects to them, too. Constructed things are all made out of raw materials, which have their own properties. You can't make concrete do anything you want it to do.

For example: some people actually have darker skin, and others have lighter skin. That's real. But that doesn't correlate to anything like "races" which have consistent characteristics. Race isn't biologically real.

And yet: in the United States, at least, the socially constructed category of "white" people has for centuries oppressed and terrorized the socially constructed category of "black people," and there is a lot of money and bureaucracy and cultural conditioning invested into the effort to keep this going. Race is not a real biological thing, but it is a very real social phenomenon, and it's oppressive.

But: for people who find themselves defined as "black" to resist this oppression, it is often helpful to claim the arbitrary category of "black" to coordinate social action and increase political solidarity. The category "black" was invented by people of European descent, and was used to create a social hierarchy, placing white people at the top. But the shared experiences of American people thrust into the category of "black" led to the creation of actual communities and a diverse but nevertheless fairly cohesive culture. Many people of African descent in the United States claimed the term "black" in a positive sense, and the Black Power movement, the Black Arts movement, Afrocentrism, and Black Pride are all different manifestations of this effort to re-claim the category of "black" from the brutal racial hierarchy imposed by means of white supremacy. Race is not a real biological thing, but it is a real social phenomenon that is oppressive, but it also can foster actual communities and cultures that work together to fight racial oppression.

People can change a social construct. But it takes a long time, much hard work, and there is incredible resistance (and even violence) from people who feel threatened by shifts in the social landscape. It's easier to transform a social construct if everybody pushed into that social construct works together, claiming the category that was invented for their own oppression. Patricia Hill Collins, a black feminist scholar, makes the case for identity politics for precisely this reason.

Finally, here is the reason for this post: No, you cannot make a Confederate flag mean whatever the hell you want it to mean. Yes, a flag is a social construct. But it's mapped on to real things, such as the history of the southern United States, which includes a centuries-long unflinching adherence to the shocking institution of race-based chattel slavery and the perpetuation of a brutal racial hierarchy into the present day. And the Confederate battle flag, which was the symbol for armed resistance even after the surrender of the Confederate States of America, played a key role in white southern resistance to the Civil Rights movement. It symbolized the desire to continue lynchings. It was adopted by the KKK to symbolize their unending fight for white supremacy. Those are real things.

You are free to choose to think that the flag simply symbolizes "good" things like honor and courage and Lynyrd Skynyrd. But this is just like someone who chooses to draw their own personal international date line over the Atlantic Ocean. You're completely out of synch with the rest of the world. For almost anybody else who sees it, the Confederate battle flag still signifies brutal racist oppression. You're perpetuating the legacy of violence against black people, no matter what you think you're doing.

We must engage the social constructions that hurt others, demean others, and incite violence and oppression. In short, we must say again and again that Black Lives Matter, precisely because the dominant social construct of race pressures us to say that black lives do not matter. Changing the way we think is only a part of the struggle, but it's crucial. And difficult. It's as difficult to change the dominant assumption of white supremacy as it is to move the world's international date line. But if the current location of the date line was killing people every day, and if moving it would help... wouldn't we try?