In November of 1987, I gave birth in the plains of Nepal. Soon after, members of the Brahman (high caste) family I'd married into began literacy classes for women. My teacher husband trained two young woman as facilitators. They used drawings to highlight a key word, prompt discussions, and generate other words that participants learned to write and read.

"What work do men do?" the facilitators asked.

"Plow...thresh...lay bricks...read books," the 15 or so participants shouted back. They were mostly landless agricultural laborers in our village, but also included several higher caste women.

"What work do women do?"

The women all talked at once: "Plant...weed...harvest...thresh...winnow...carry firewood and fodder...milk the buffaloes... cook...clean...give birth...breastfeed." Given more time, they could have gone on and on. 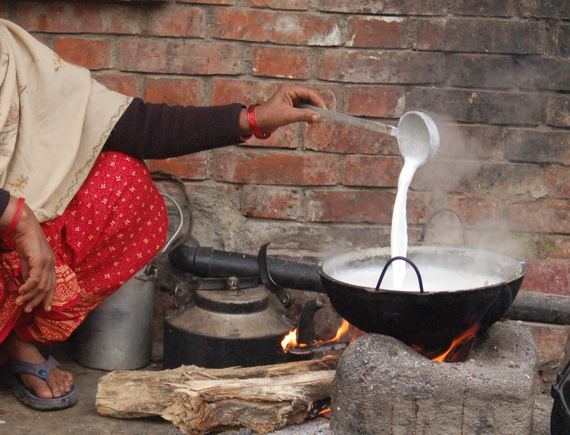 As a foreigner and a family breadwinner, I was exempt from what local culture deemed women's work and not considered ritually pure enough to cook meals for my Brahman father-in-law. Still, I was exhausted from breastfeeding, interviewing and note-taking for my PhD research, helping to clean vegetables and wash dishes and tending a fussy baby who never let me sleep more than an hour or two at a time. But I couldn't keep up with my mother-in-law and sister-in-law.

They woke before sunrise most mornings then milked buffaloes, heated the milk, skimmed off the cream, churned butter, made tea, popped corn, swept, picked stones out of rice and lentils, cut vegetables, hand-ground spices, cooked the morning meal, washed dishes at the water pump, laundered clothes, weeded vegetable beds, repaired earthen plasters, directed the children to finish homework or help with chores, walked long distances to cut grass for livestock and carried it back home on their backs, cooked an afternoon snack of chapatis and chutney, mended family clothes, fed the buffaloes, shelled peas, cleaned kerosene lanterns, harvested and washed vegetables, picked stones out of rice and lentils and ground spices yet again, cooked the evening meal, washed dishes, swept the kitchen and verandah, put children to bed.

Landless women who lived in a colony near our house worked even harder. Many belonged to lower castes. They also rose early and perhaps breastfed a child and swept the courtyard before first light. Then -- often on empty stomachs -- they walked to a landowner's farm such as ours for a day of weeding corn or planting rice. In some arrangements, they received meals -- perhaps their only full meal of the day. If they didn't have work-meal contracts, they might eat some rice, salt and chilies back in their hut at night.

Women in the literary classes discussed other hardships they'd suffered themselves or heard about in other families: beatings by husbands, lack of say in their families, harassment in public spaces, medical treatment and food denied to young wives especially after giving birth to a second or third daughter, heavy work right up until delivery and soon after, lack of income and inheritance rights, pressures to take young daughters out of school and force them into early marriage. Not all families treated women in such ways. But enough did that women in our village organized the first local celebration of International Women's Day in March 1988 and launched a campaign to demand changes.

Perhaps because I'd had a difficult pregnancy and delivery, many women in our village often took breaks from their daily tasks to visit and tell me privately about their reproductive health problems: lower back pain, a sense of things sliding out "down below," pain during sex, irritation when urinating or walking. I wondered how women endured such chronic pain with no breaks from their heavy work loads and wished I could help. But I was a cultural anthropologist researching social inequality, not a medical doctor. I had some layperson health books, like David Werner's Where There is No Doctor yet was out of my depth around any but the most straightforward complications. Aside from urging women to consult with doctors (which many refused to do because of expense and past humiliations), I didn't have any solutions.

I now suspect uterine prolapse caused at least some of those symptoms women described to me. Afflicting at least 10% of Nepal's 13.6 million women, uterine prolapse is a weakening of the muscles and ligaments in the pelvic floor, which allows the uterus to slip partially or wholly into the vagina. Worldwide, uterine prolapse is usually an affliction of older women. But in Nepal, it is prevalent among young women too. Recent research initiated by Nepali activists and health care workers pinpoints the cause: gender discrimination, particularly women's restricted choices around sexuality and reproduction. Heavy work like women in our village talked about in 1987-88 is one aspect. But early marriage and pregnancy, closely-spaced pregnancies, malnutrition and domestic violence all compound the toll that work takes on women. And those causes are often rooted in cultural practices, particularly in some Hindu castes.

According to a recent Amnesty International Report, "Unnecessary Burden: Gender Discrimination and Uterine Prolapse in Nepal," many women try to hide the painful symptoms of uterine prolapse not only out of shame but also out of fear of scoldings and beatings. Yet, chronic pain makes it hard for women to keep up with chores, and a women who seems to be slacking off becomes vulnerable to violence or abandonment.

Nepali women's organizations have a long history of fighting for women's rights at national, regional and village levels. The government has also ratified a number of global human rights agreements, including those that require women to be free from all forms of discrimination and violence and to be able control their sexuality and make their own choices about reproduction. Leveraging such protections, Nepali feminists and others pressured the government to view uterine prolapse not just as a health problem, but as a human rights concern. In 2008, the Supreme Court recognized the human rights dimension and charged relevant ministries to take action. The court ruling led to increased funding for surgeries and various prenatal health initiatives but did not challenge the discrimination that causes uterine prolapse. And the focus on surgery led to what some doctors claim were unnecessary hysterectomies.

Since the ten-year civil war ended in 2006, Nepal's government has been struggling for stability, unable to reach agreement and action on many urgent issues, including a constitution that many hope will secure equal rights not only for women but also for those marginalized by caste, ethnicity, geography, religion or sexual orientation. Through the ups and downs of successive regimes, activists--both women and men--continue to keep uterine prolapse in the spotlight. Most recently, they gathered 125,000 signatures from Nepal and two dozen other countries petitioning the government of Nepal to recognize uterine prolapse as a human rights issue and to adopt effective plans to tackle the gender discrimination that both causes and results from it. Officials received the petition in May 2014 with some assurances that the demands would be considered in upcoming efforts to draft a national human rights plan.

Deliberations on a countrywide human rights plan as well as a constitution continue in Nepal. Whatever laws and policies are enacted, implementation across multiple agencies to address multiple, deep-rooted cultural practices will be challenging. But, no matter the outcome, Nepali feminists, human rights activists and health care workers will no doubt keep up the pressure to treat both the symptoms and underlying causes of uterine prolapse.