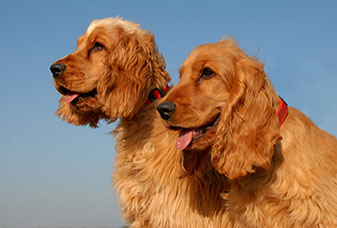 Noises from the upper floor of the house; unfamiliar people; sudden movements. Those were just a few of the things that scared Buster. The buff-colored Cocker spaniel lived with his human parents and dog-sister Betsy in a two-story condo. His owners had called for help in rehabilitating Buster so he could go through life without being chronically anxious. At our first session, he appeared to be as frightened as they'd reported. Although he was clearly food-motivated, he was afraid to approach me. Everything in his body language broadcasted a hesitancy to interact. Where, I asked his owners, was Betsy? They'd locked her away in another room so as to reduce distractions during training. I suggested we let her out. I wanted to see whether Buster's behavior might change with her there.

To say a transformation occurred would be an understatement. As soon as Betsy entered the room, she ran over and jumped on me for attention -- and so did Buster! It was hard to believe this was the same dog who had, minutes before, practically been afraid to breathe the same air as me. With Betsy in attendance, I was able to work successfully hands-on with Buster. As our sessions progressed, we worked gradually toward his feeling confident without Besty present; but having her there at first was the key that allowed me to get a foot in the door.

Social facilitation means that one dog's behavior amplifies or changes another's. For example, one dog howls or barks when another does, or one anxious dog's behavior in the vet's waiting room causes another dog to become upset. But social facilitation can work to a dog's advantage too, as in Buster's case. Studies of thunderstorm phobias, for example, have shown that the presence of another dog who is relaxed can actually calm the phobic dog, whereas whether the owner was nearby or not didn't seem to make much difference.

I've employed social facilitation with clients whose dog was afraid of a family member. Unfortunately, the trigger in these cases is usually a man (sorry guys, it's the testosterone -- you're bigger, have deeper voices, and tend to be scarier to fearful dogs). Behavior modification programs can go a long way, but sometimes bringing another dog into the picture can move things along a lot more quickly. (Be sure the dogs get along first, and don't invite another dog over if yours is territorial.) The scared dog sees the other dog approach the man; the man pets and plays with the friendly dog, and feeds treats. The scared dog will, more often than not, begin to approach the person as well. Even if he doesn't get involved in the action the first time around, chances are, with repeated exposure, he'll learn from the other dog that the person is no one to fear. (If the second dog doesn't like the man either, I might start to wonder about the guy... I'm just sayin'.)

For a dog who's frightened of pretty much everything in the great outdoors, assuming the dog is dog-friendly, inviting a friend with a confident dog to walk alongside can help. Just as with Buster, it could help the dog to see the world as less of a threatening place. There are so many types of situations where one dog can alleviate the stress of another. I even know of a woman who's second dog was allowed to spend the night in a cage at the vet's office with the one who was recovering from surgery, since the second dog served as a sort of security blanket for the first.

Now, all of this is not to suggest that getting a second dog will fix any and all behavior problems another dog may have. Of course it won't. But social facilitation is one more "tool" to keep in your toolbox of things that may help your dog in fear-producing situations. Or, to put it another way, sometimes two dogs are better than one!