This is the twelfth installment of the Impact series, #SocialGoodStars. The people highlighted here are passionate, dedicated philanthropists, strengths to their communities, and social media masters. They also happily share their vast knowledge with others, making them shine as leaders in the Social Good world. You can read the eleventh interview with Global Impact CEO Scott Jackson here.

"The sea, once it casts its spell, holds one in its net of wonder forever."
- Jacques Yves Cousteau

Fabien Cousteau was born with a passion for the ocean. His grandfather, Jacques Cousteau, was a prolific ocean documentarian and explorer (134 documentaries, 70 books), and an inquisitive conservationist who helped invent the aqualung, allowing modern SCUBA diving. Fabien spent many years on board the Calypso and Alycone with Jacques and his family, developing a love for the ocean, filming it, and helping its creatures. His father Jean-Michel and sister Celine are also avid explorers, and the three of them completed a three-year multi-hour series for PBS called Ocean Adventures in 2006. Fabien uses his environmental economics degree from Boston University to bring insight into striking balance between regional and global environmental issues and the realities of market economies. In 2010 he founded the nonprofit Plant A Fish to empower and educate local communities by replanting aquatic plants and animals.

Between traveling between France and New York City, Fabien spends a great deal of time on the oceans filming. He also speaks around the world about the Ocean and its ecosystems, and has appeared on the Oprah Winfrey Show, Gayle King, and NBC's Today Show. He is involved with the boards of SeaKeepers Society, Water Innovation Alliance, Millennium Project, and many others, and has spoken recently at TEDx and the 2012 UN Rio Earth Summit.

Here are some of his thoughts on saving the world, one fish at a time. 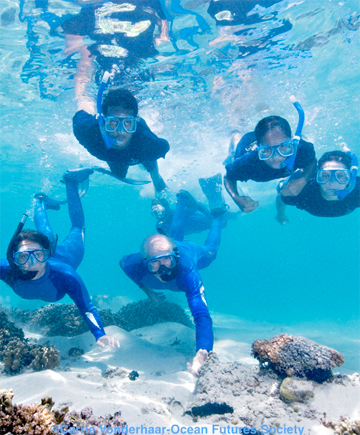 You've said, "The oceans are the circulatory system of life on this planet. Quite literally saving the oceans protects ourselves." Can you expand on that?

Oceans make up 71% of the earth's surface and 97.5% of all the water on earth. And around 70% of all food contains ingredients from the oceans, even down to the grain grown using fish meal that may be fed to animals, or the kelp in ice cream. Someone skiing on a mountain 1000 miles inland is skiing on snow from water in the oceans. It's critical to protect this ecosystem since it impacts all facets of life.

Once you start to learn more about the ocean and all its incredible life forms, it's nearly impossible to turn your back. That's why Plant a Fish came about - to educate, empower, and help restore these amazing creatures and ecosystems in a hands-on, fun way.

Telling stories visually, through documentaries and photos, is a hallmark of yours. Why do you think that's so impactful?

Although it would be ideal for everyone to be able to experience the wonder of the ocean scuba diving or on a scientific submarine, since that's not practical, being a storyteller for the oceans is the next best thing. I started film making when I was 8 and love it. Visual elements are at the core of telling compelling stories, and telling stories is a great way to inspire people and evoke emotions.

This is useful for any organization, visual storytelling. And although the attention span increases with the quality, any tool is a great tool when used properly - even a casual video shot from a smartphone can capture the essence of an event in a way that shares it more fully with the audience. And photos can capture the beauty and emotions of particular moments so they're recreated for others, and create a desire to help or learn more.

What are some ways individuals can help the ocean?

Of course we offer many programs, and ideas to start an effort in your area, at Plant a Fish. Another great resource is your local aquarium. They will have access to conservation groups, events, and activities you can join to get more personally involved. There are hands-on actitives like beach cleanups and local restoration projects that are an opportunity to have fun and learn as well as protect and restore.

And things like recycling are invaluable, but often come a bit late in the process. Instead, think: Refuse to use, reduce, reuse, then recycle. Conservation and protection are far more helpful to the environment that fixing things after they're broken. 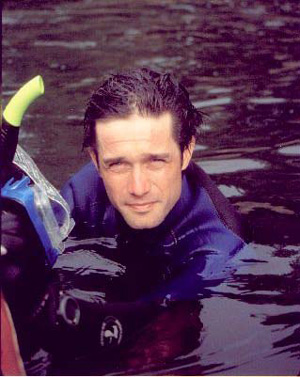 Fabien Cousteau was inspired to protect the oceans growing up on the decks of his famous Grandfather Jacques Cousteau's ships, Calypso and Alcyone. Photo courtesy of FabienCousteau.org

You can learn more about how to get involved with the oceans at Plant a Fish, on Facebook, and @PlantAFish on Twitter.

Amy Neumann is a social entrepreneur, writer, speaker and consultant on social good marketing. Check out her Charity Ideas Blog and follow her on Twitter @CharityIdeas.