By David Bloomgarden and Zachary Levey

David Bloomgarden is the acting chief of the Multilateral Investment Fund's Access to Basic Services and Green Growth Unit and the topic lead of its Public-Private Partnerships program. Previously, David was deputy director of the Office of Multilateral Development Banks in the U.S. Treasury Department's International Office.

The challenges of providing education and formal employment, encouraging the empowerment of women, and stemming the rise in chronic diseases continue to be serious concerns throughout the developing countries and emerging markets of the world. Institutional roadblocks, mistrust between governments and investors, inconsistent and low-quality delivery of services, and a simple lack of funds have at times made it impossible to find solutions to these issues.

A growing number of developed countries--particularly the United States and European countries--are exploring a new financing mechanism called social impact bonds (SIBs) as an alternative to traditional ways of resolving some of their most intractable social problems. SIBs are a groundbreaking opportunity to bring private investors, philanthropic organizations, nongovernmental organizations (NGOs), and government to the same table to find innovative and evidenced-based solutions to social problems.

How do SIBs work?

A SIB is a partnership in which impact investors (investors that seek social impact as well as financial returns) and philanthropic organizations--not governments--take on the risk of financing a solution to a difficult social problem. Once NGOs and social enterprises (businesses that generate societal goods and services as well as financial profits) receive working capital from private investors or philanthropic organizations, they can work directly with their communities to implement an effective social service, for example a reintegration program for recently released prisoners. If these organizations are successful, the government pays the private investors for the positive societal outcomes. As a result, governments are able transfer the risk of testing innovative programs by paying only when there are results, NGOs can access flexible and longer-term funding, and taxpayers get more rigor, accountability, and value for their money. For example, two SIBs that are working to improve conditions for at-risk 14-15-year-olds in the United Kingdom have performed above expectations and delivered outcomes sufficient to return investor capital earlier than expected, according to Social Finance, the U.K.-based NGO that is managing the programs.

Social impact bonds hold substantial potential, not only for the United States and Europe, but also for many emerging markets around the world. Recent developments indicate that Latin America may become a robust new frontier market for SIBs, with a rich set of multiple-player ecosystems. 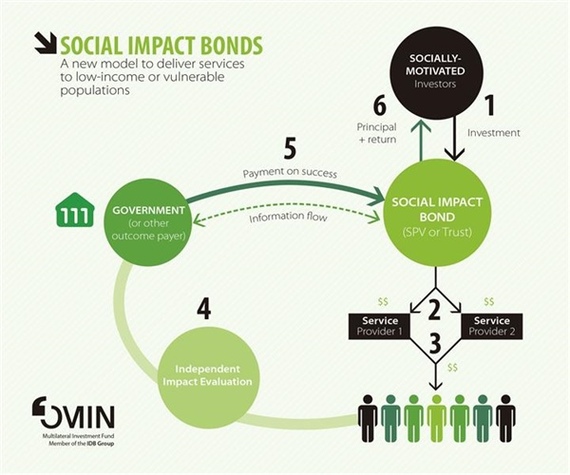 The nascence of SIBs in Latin America

In Mexico, the federal government and several states have begun exploring where SIBs could be a tool for contracting better social outcomes. For instance, the state of Jalisco has been studying the design of a program to move single mothers permanently out of poverty, working in collaboration with the Multilateral Investment Fund, the innovation laboratory for the Inter-American Development Bank Group. Jalisco has a rich history of partnerships with local entrepreneurs and impact investors. In Mexico overall, there is a vibrant ecosystem of NGOs and social enterprises that could provide the services within a SIB. Additionally, there are a growing number of major local philanthropic foundations that have expressed serious interest in using SIBs to develop a more performance-driven social sector in Mexico.

Brazil, too, has developed the beginnings of a SIB market. States such as Minas Gerais and Ceará are exploring SIBs as a tool to address intractable social problems, such as prison reform and improving education and school completion rates. Impact investors, philanthropic organizations, industry organizations, and universities are getting involved as well, laying the groundwork for a strong market ecosystem for social impact bonds. Furthermore, Brazil has organized its own national taskforce for impact investing that will soon join an international taskforce created under the auspices of the Group of Seven (G7, formerly G8) governmental forum of the world's leading advanced economies. The G8 created its Taskforce on Social Impact Investment in 2013 to advance its member countries' respective impact investing agendas. Brazil's involvement is big news for social impact bonds in the country, as it lays the groundwork for a robust market for social outcomes.

While SIBs hold great potential for Latin America, adapting the model to that context will likely encounter major challenges. As evidenced by recent news that the first SIB in the United States--aimed at reducing recidivism rates in Rikers Island, New York City's largest prison complex--was unsuccessful, SIBs are not a panacea and don't guarantee success. However, that is a good thing, particularly for cash-strapped governments that need to keep social spending accountable to results. SIBs require a cultural shift on how societies think about funding and implementing social services. And this shift does not come easy. SIBs require breaking down silos between investors, philanthropic organizations, NGOs, and government agencies; instilling a new culture of data and performance management in service delivery; and training in new skills to support demands for more evidence-based interventions. While these challenges are real, they are not insurmountable. Latin America has been a historically notable exporter of social innovation. A prime example is conditional cash transfer programs that pay cash to families for regular visits to the doctor and consistence school attendance, which were first developed in Mexico and Brazil and have been replicated across the globe.

While countries in Latin America search for effective solutions to their most difficult problems, the funding for these solutions can be even harder to find. Developing a series of well-designed and successful SIBs will open up a new frontier in the quest to resolve social issues in the region. SIBs could provide the incentives, financing, and cooperation necessary to provide greater access to quality services for vulnerable populations, from the Rio Bravo in Mexico, south to Tierra del Fuego in Argentina.

Zachary Levey
Zachary Levey joined the Multilateral Investment Fund (MIF) in 2008 and has led operations to support clean technology deployment, social innovation, and access to basic services. He heads the MIF's initiative on social impact bonds in Latin America and the Caribbean.