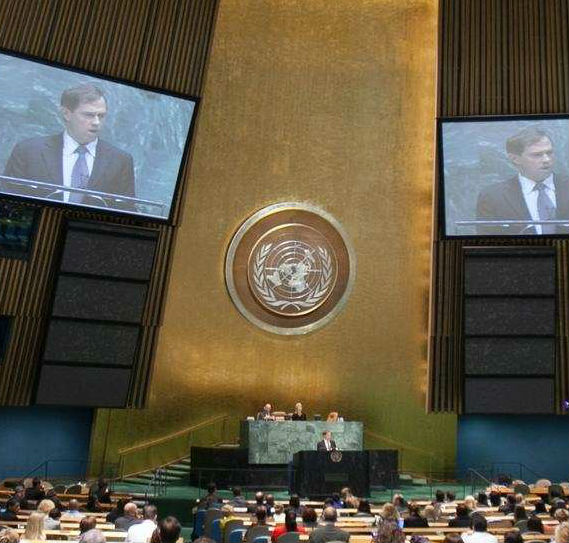 Recently I attended Social Innovation Summit 2013 that took place at the United Nations. The summit connected and inspired a global network of leaders discussing the key strategies and business innovations creating social transformation across the corporate, investment, government and non-profit sectors. I was selected as one of three dedicated to amplifying the whole experience as Social Media Ambassador.

"We will first innovate and then we will renovate!" were the welcoming remarks by United Nation's Assistant Secretary-General Robert C. Orr as this was the last meeting to be held in the General Assembly Hall as we know it. Seems a perfect metaphor for the seismic shifts occurring as we go from "the great disruption" towards "the great distribution." While simple in phrase -- we are truly in a complex time where currency that used to mean tangible bricks -mortar-money has become fluid and what is increasing in value has become the intangible flow of ideas and the power of a personal influence.

While there was excitement around technical revolutions such as Steve Gleason's remarkable use of technology to speak through his mind on a synthetic voice to champion his cause to fight Amyotrophic Lateral Sclerosis (ALS) and the fascination with the beautiful bicycle made out of cardboard introduced by Nimrod Elmish of I.G. Cardboard Technologies, the story I want to tell about the Social Innovation Summit is one about low tech and the power of an individual with a good idea. John Wood, Charles Best and Premal Shah remind us that we all have to power to read, to connect and to affirm.

John Wood founder of Room to Read believes World Change Starts with Educated Children®. The ability of a human to express oneself is fundamental to belonging. John believes that books are the engine to drive not only literacy but also the ability of an individual to communicate and connect with his/her own community. As I heard him speaking I was reminded of a saying from a Siberian elder : if you don't know the trees you will get lost in the forest; if you don't know the stories you will get lost in life. John's vision is to find the Dr. Seuss and J.K. Rowling in each developing country. He wants children to learn to read in their own language with own stories. He has now over 1000 authentic books made and distributed that are very personal and respectful for the respective communities. Total book donations for the cause world wide exceeds 12.5 million books. In a world that seems to becoming more and more homogenous - it is delightful that a social innovation isn't so much about change or creation but the power of reading and the power of preserving culture.

If you want to build a ship, don't drum up the men to gather wood, divide the work and give orders. Instead, teach them to yearn for the vast and endless sea ~ Antoine de Saint-Exupéry

Charles Best founder of Donors Choose was a high school history teacher in the Bronx. He had a belief that students would be more engaged if what they were studying had real time implications not in a historical context but in real time, now time. With his own students they created a mechanism by which teachers could create classroom projects and pair these projects up with individuals and organizations really passionate about the topic willing to provide requested resources as donations to the classroom. The example he shared was classroom in Massachusetts wanting to save salmon and study perch. The students needed 20 perch to dissect and were responded by a wildlife advocate in Alaska. Designed into the process is a feedback loop where the generous donor gets information on what the students learned and the impact from gift. The connection between having a real time topic, real time request, real time generosity and real time gratitude teaches way beyond STEM. It teaches citizenship. Thus, the power to connect.

Banks, you ask me if I am worthy of credit? I ask you if you are worthy of people ~ Honorable Professor Muhammad Yunus (Sibos, Osaka 2012)

Premal Shah co-founder and president of Kiva has a response to Professor Yunus. Formerly at PayPal and testing the micro-finance concept in India, Shaw and team Kiva raise over $1 million each week for the working poor in +50 countries. That alone is remarkable and a positive disruption in those communities. The idea we just learned about disrupts own financial model. For the first time in lending history it isn't your credit score that gets you funded, it is your reputation. Premal calls this "codified credit" and social underwriting. So for all of you doubters who think social is about quotes and perks and advertising and blogging and play (dare I include our friend Malcolm Gladwell) it just got serious. Your reputation can literally impact your financial viability. We always knew that intuitively -- now there are algorithms and financial models that make it even more obvious. Enter game-changer, Kiva Zip. A person's future is more defined by their character than their history and it is so lovely to have a social innovation that allows us the power to affirm others.

Over 50 speakers and many remarkable ideas. I truly just want us to remember that innovation doesn't have to be technical or radical. An innovation can simply be a single person doing what they love asking a genuine question and seeking an answer. To lighten the mood in closing, I found Hasbro's Alan Hassenfeld sense of humor refreshing, "if you think you are too small for making impact, you have never been in bed with a mosquito." Surely the sting of your curiosity has more bite.