"In the mud someone as scrawled, "MAGIC WORD XYZZY."
-- Colossal Cave Adventure

Almost all of what we do on Twitter, Facebook, Tumblr, and Google+ was predicted, some might even say preordained, by an ancient race of wizards and warriors in the 1970s and 1980s. These pioneering gamers invented and explored virtual worlds, magical caves, primeval castles, historical eras, and fictional universes and along the way discovered community building, roleplaying, gamification, natural language processing, online chatting, hashtags, and fan fiction. These forerunners of of the 21st century accomplished all of this without business plans, 3D graphics, or venture funding. Most importantly they did it for fun and the shear joy of journeying deep into social and technological terra incognito.

I'm talking about Multi User Dungeons (MUDs) and the activity of Mudding (playing within a MUD not driving a small truck in a pit of organic backwoods slime). In Internet terms Mudding started a long time ago in a galaxy that feels far, far away. In the 1970s Will Crowther, a programmer, spelunker, and member of the ARPAnet development team, created the first interactive text adventure computer game. It was based on his experiences in Kentucky's Mammoth Cave and called Colossal Cave Adventure. In Crowther's game the player typed in plain english words and the computer responded in kind. Part of the fun was discovering the right words and the game's amusing responses to those words. But the main objective was to explore a richly detailed virtual cave hidden inside a computer program with fantasy characters inspired by Tolkien's books and the Dungeons and Dragons roleplaying game.

As good as Colossal Cave Adventure was, it was a game you played on a single computer. Since the game was a bit of a brain teaser it was more fun when several people crowded around the keyboard to play together. In 1978, Roy Trubshaw and Richard Bartle wrote a text-based adventure game that could be played with more than one computer across a network. This game, MUD1, became the prototype upon which all MUDs were inspired. In the 1980s and 1990s Mudding exploded with hundreds of variations of MUDs with millions of players accessing these games through dialup services (AOL, Genie, Compuserve, and Prodigy). MUD1 and its successors brought the social aspects into gaming with all of the benefits (friendship, roleplaying, collaboration, chatting at all hours of the day and night) and the negatives (trolling, gaming addiction, and social hacking) that we see in today's Internet applications. 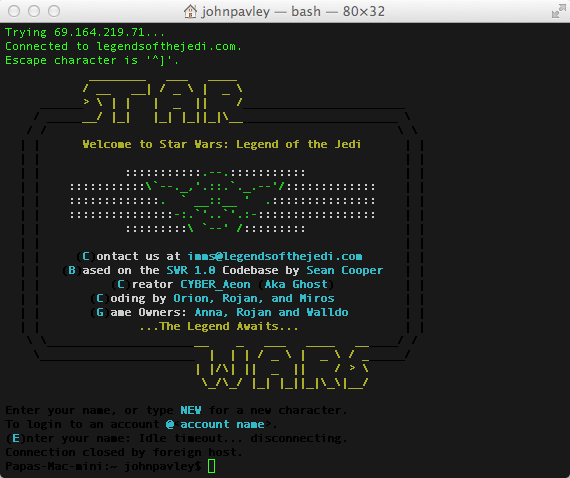 Over the years programmers and designers have heaped competitive elements, graphics, sounds, and complex user interfaces on top of the basic ideas that Crowther and Trubshaw embedded in their code. The players of MUDs have enjoyed just as much, if not more, influence over the genre of MUDs than the coders. The MUD players have created their own cultures, languages, and communities around their favorite MUDs. These players would grow up to be today's blockbuster Internet application creators, bringing elements of MUDs to Google, Facebook, Reddit, Blizzard, and Zynga.

There are still thousands of MUD players, logging into Telnet screens to play interactive stories on software that was written 20 years ago. Why is that? And what can these players and the people who manage these venerable text adventure games tell us about what might show up soon as "new" features of Internet applications?

I met Jonathan Gottfried through the Hacker Union. Jon is a throughly modern software engineer: He works at Twilio as a developer evangelist, attends big events likes Google I/O, co-founded Hacker Union, and is very active in the NYC startup scene. But there is another side to Jon: He is the co-owner and technical lead of the MUD Legends of the Jedi. While Jon has one foot firmly planted in the 21st century technology of Google Glass and mobile messaging he has another foot just as firmly planted in the 20th century technology of text-based multi-user dungeons.

For Jon mudding started about 10 years ago. Like just about every kid in the 2000s he played video games with fancy graphics and specialized hardware. When Jon discovered his first MUD he discovered two important keys to the universe of fun: Storytelling and real-time communities. With a MUD like Legends of the Jedi each player is deeply integrated into the game and responsible for creating a great character and compelling storyline. There are no 3D animated monsters or mood music to hide behind: Just words. In a typical video game the player is on a roller-coaster like ride with only a few degrees of freedom. In a MUD the player is an author in a collaborative work of interactive fiction.

Legends of the Jedi and MUDs like it are not episodic. They don't go off the air or take commercial breaks (except when the server crashes). MUDs are meant to be played 24/7 with dozens of players interacting in real-time and moving the story forward. Some MUDs have winners and losers while others have climaxes. The realtime and continuous nature of MUDs can turn them into addicting time sinks. The behavior of MUD players predicted the addiction of the general public to Facebook, social games, and MMORPGs.

Over the last decade Jon went from player, to system administrator, to lead developer and co-owner of Legends of the Jedi. He now oversees a virtual empire of over 3000 accounts and 800 characters. These numbers might seem small in terms of Twitter or World of Warcraft but with no marketing, no fancy graphics, an aging technology base, and the demands of creativity and time that role playing takes, these are still amazing numbers.

While the game is text-based and the players create most of the content, the code is not simple. Jon has to deal with 400 thousand lines of C source code and has introduced modern scripting languages like LUA and Ruby. The Legends of the Jedi codebase can trace it roots all the way back to 1991 and a MUD server developed at the University of Copenhagen (DikuMUD). Back in the 90s MUDs were both games and social experiments: systems that explored how players could collaborate, cooperate, and communicate.

Looking at the long history of MUDs and the people like Jon who play and maintain them, what can we apply to the future of Internet applications? What problems and solutions have MUDs run into and solved that Facebook, Twitter, Google+, and Tumblr are going to have to deal with?

Retaining a user-base is one big issue. Every community has a growth pattern, one that starts out small, experiences rapid or slow growth, stabilizes, and eventually fades away. MUDs are clearly on the fading side of a 30 year growth curve. The people still playing MUDs are not the casual or fad users but rather players who give a lot and get a lot out of their MUDs. There is also a pattern of long time players leaving a MUD and returning later in life. At some point in the next year or so we'll see the big social and communication networks start to fade as new technologies come into play. We'll probably see users disconnect from older networks, like Facebook and Tumblr, as careers and kids get in the way and leaving behind hardcore social users. But after careers are settled and the kids are out of the house there is a good chance that former users will return, if these social networks still exist in five or 10 years.

Surviving technical upheaval is another big issue. Today's social networks were all born in the era of well connected desktop and mobile computers. You can't use Facebook, Google+, or LinkedIn unless you have access to a fairly sophisticated website with a reasonable amount of Internet connectivity. But a MUD? You don't need much of a computer or a high speed connection to play Legends of the Jedi or any other MUD. About 2.4 billion people are connected to the Internet today and most of them live in the US and Europe. The next generation of Internet application users, 2-3 billion, will come from Africa and Asia. They will mostly use mobile devices and their unreliable Internet connectivity will make it hard to download and upload huge images and videos. They won't be clicking on many ads. Today's social media networks and games, if they are to survive, will need to be more MUD-like and create a lighter technological footprint.

There is much gold to mine in MUDs but the last big issue I'll look at is privacy. As the news of widespread datamining by governments and corporations continues to seep in to consumer brains we'll see a big backlash against sharing private data with dozens of social networks and websites. I just got an email today from Facebook apologizing for inadvertently sharing my personal info with someone who was not my official Facebook friend:

"The bug was limited in scope and likely only allowed someone you already know outside of Facebook to see your email address or telephone number."

In a MUD you don't use a real name, cookies are not stored, and a player's personal profile is fully fictionalized. (I'm sure there is some amount of social media profile fictionalization happening already but the big social media companies frown on that sort of thing!) What happens to these Internet applications when users start taking their privacy seriously, turn off cookies, and encrypt their data?

My guess is that there are quite a few former MUD players in the halls of Twitter, Facebook, Tumblr, LinkedIn, and Google+. These ex-dungeon crawlers can use their online roleplaying experience to help their Internet applications navigate the waters of community building, technology paradigm shifts, and privacy concerns. Like Jonathan Gottfried they have gone from the outside to the inside and they know all the cheat codes.

If you want to play Jon Gottfried's MUD Legends of the Jedi use this link: http://legendsofthejedi.com/ (free)

If you want to play a version of Will Crowther's Colossal Cave Adventure on the Mac OSX use this link: http://www.lobotomo.com/products/Adventure/index.html (free)

If you want to learn more about the culture and tech of MUDs and the Wikipedia article isn't enough check out this link: http://www.faqs.org/faqs/games/mud-faq/diku/ (written in 1997!)

If you want to learn about designing a MUD, much of which can be applied to designing an Internet application with a scalable community and deep engagement Jon recommends Designing Virtual Worlds by Richard R. Bartle (co-creator of MUD1)