Since 2007, the United Nations has recognized Feb. 20 as the World Day of Social Justice. They identify social justice as a major underlying principle for peace and prosperity. Last month I traveled to Castañer, Puerto Rico and I witnessed the validity of this belief. 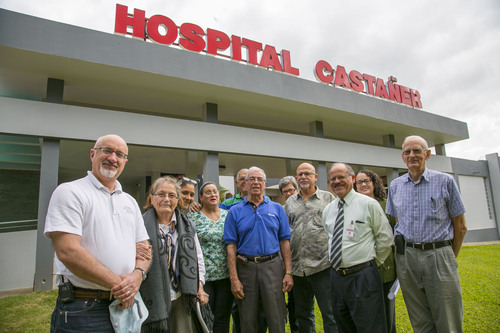 Outside the hospital originally built by Church of the Brethren members during World War II. Photo by Stephen Bailey, courtesy of Heifer International.

Puerto Rico was the country to which Heifer International sent its first 17 cows 70 years ago. The cows traveled from Mobile, Alabama, to San Juan, and then on to Castañer. Where there was once a poor, isolated village. There is now a peaceful, thriving community. Though there are no dairy cows left in Castañer (everyone buys milk in the supermarkets like they do here), the legacy that the Church of the Brethren and Heifer International brought remains. I saw it as I met community members and visited the hospital (one of the best in Puerto Rico) and the school. Over the years, they have been united in their interest to build for the common good, for the Castañer community. They recognized that democratic process, social justice, full participation and holding everyone accountable for what needed to be done, connected back to the way Heifer has always worked.

This community in the middle of Puerto Rico is living proof that social justice underpins peace and prosperity.

Heifer's legacy in Puerto Rico from Heifer International on Vimeo.

Where have you seen social justice in action?