"Are we asking students to collect dots or connect dots?"

The evocative question was posed by Seth Godin at a 2012 TEDx event in Brooklyn called "Freedom & Democracy: Education for Change."

Connecting the dots amidst the tumult requires innovation. It requires educators willing to co-create with students, and it opens the door for the use of technology as an integral tool through which youth can shake up the status quo and engage in meaningful learning.

Last year, on the fifth annual Spirit Day, 23 students sat in a classroom in Birmingham, Alabama, iPads out, ready to participate in a Google Hangout session with GLAAD to discuss bullying and LGBT issues in schools. "The return of #SandersTHS! #SpiritDay" tweeted one student excitedly. 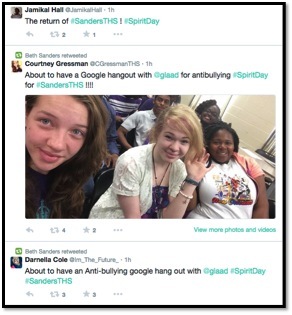 Technology in the Classroom

In 2012, their social studies teacher, Beth Sanders, began using the hashtag #SandersTHS on Twitter as a way to connect her students to peers, mentors, authors, educators, and others outside of their immediate surroundings. Through the district's emphasis on effective instructional technology integration, students were able to access social media and internet resources on a 1-1 basis during class time--a reality that many young people take for granted, yet others do not have access to in their daily lives.

Sanders "believe(s) strongly in the power of technology not only as a means of support, but also to engage, enlighten, and energize all 21st century learners and educators alike." Through purposeful technology integration, she sees the potential for public education's true purpose to be realized and enacted--that all people can become "independent, aware, empathetic problem solvers that can not only live, but thrive in an ever-changing world."

As they engaged with social media in a supportive environment, students began to realize that they can "be the change they wish to see in the world," as Gandhi advised. For example, rather than simply discussing or reading about the essential question of what "being a citizen" looks like nationally, globally, and digitally, Sanders' class engaged in a collaborative effort with college freshmen to create public service announcements in various media. Alongside Ms. Sanders, the students of #SandersTHS facilitated and lead a Twitter chat about iCitizenship, video-calling into a Town Hall meeting at St. Joseph's College with a crowd of several hundred and generating nearly a thousand Tweets. That year, they also connected with author Kenneth C. Davis about elections and American presidency, then shared their newfound knowledge and developing opinions with my students in Jersey City, New Jersey, using the hashtag #NJ2AL. In 2013, the SNCC Legacy Project and Zinn Education Project brought SNCC veteran Dorie Ladner to the classroom via webcam, a truly once-in-a-lifetime opportunity.

For Sanders, all of these experiences are ongoing acts of character building--it is second nature for her to tie every lesson back to 'humanity, humility, civility, and right versus wrong.' Character development is neither explicitly taught in most classrooms nor required by standards or curricula, but it is integral in helping young people become compassionate, empathetic, active, and aware individuals who will stand for themselves and others. Students have begun to believe that what they are doing is not only purposeful, but also necessary. Sanders says, "I saw attitudes transform, heard critical ideas being voiced, and saw passions being born right before my eyes because they were not only committed to the project, they believed in its ability to bring about positive change in themselves, their community, and even the world." 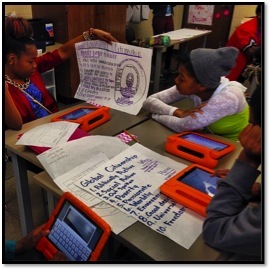 From my desk at the GLAAD offices in New York City, I was greeted by excited Tweets five minutes before our call began, and then by a sea of purple from Birmingham. I introduced myself, gave some background on the history of GLAAD, and then launched into an in-depth discussion. Gender and sexuality are not common topics of discussion at Tarrant High, so Beth and I facilitated talk about marginalization and identity that students had more practice discussing to lead into the topic. Impressive connections were being made between bullying based on 'race and intelligence' at their own school and broader bullying based on gender expression and sexual orientation, powerful ideas about allies were shared, bystanders versus up-standers were defined and debated, and empathy abounded.

A few of the students in the classroom self-identified as the only 'out' students at Tarrant, and as I listened to their experiences with marginalization--which included stories of past discrimination from students that sat alongside them--I marveled at the way they felt comfortable sharing their thoughts, truths, and lives with their peers.

The Spirit Day session ended when the bell rang, but the student takeaway was tangible. In a discussion with a few students the following week, I heard about the importance of Spirit Day because "it raises awareness that bullying is still a problem that needs to be fixed," which shows "people of all ages, races, backgrounds, and nations that there are people who care."

Students also had unique perspectives on how to make their school, which does not currently have a gay-straight alliance, more inclusive, stating that there should be a group that supports all students--whether LGBT or "for everyone in [the] school, even those who seem to have it all, because they are bullied into thinking that if they are not with the crowd then they are 'lame' or uncool."

Often times, especially in schools, decisions are made regarding young people without ever listening to their voices. But, if you encounter a group of #SandersTHS students, you will know it by their level of engagement, empathy, and citizenship, and you will be humbled and optimistic about our collective future. We need more educators who believe in the necessity of youth voice and technology engagement, and who empower them to build the better world they envision and deserve. 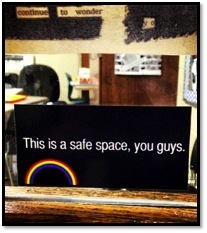