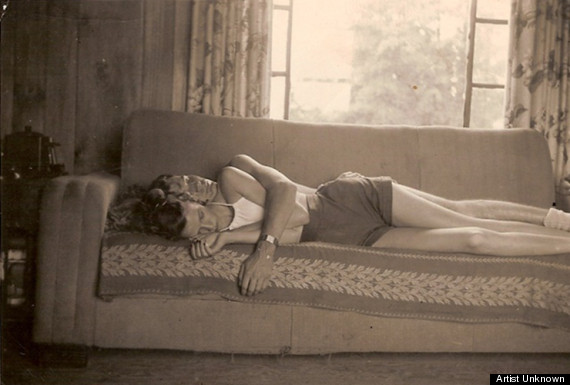 Oliver Wasow is an artist who directs our gaze. Using vernacular photographs or unique images he has fabricated in his studio, he creates a filter through which we look. By categorizing found photographs, he much like a movie editor, directs in a subtle way a narrative story for the observer. Delving deep into themes that are attractive to his personal aesthetic, he creates mythologies about familiar objects, anonymous families and friends and commonplace occurrences. While Wasow selects the images through which the viewer will comprehend a particular theme, the viewer is given plenty of room to superimpose their own imaginings on the images that are often unexplainable or humorous. By pinpointing certain aspects in a theme, Wasow directs the viewer to peer into a past contrived by his own preoccupations. For his original works, he creates a kind of cinematic painting whereby he alters a variety of images to fashion another kind of illusion, one that seemingly takes place in the analog past and the fantastical future simultaneously.

You can read part one of my interview with Oliver Wasow here.

TH: There is a collaborative nature to the Internet, with many people speaking to each other, often at the same time and over each other. Ideas on every scale overlap and the passions of micro-cultures are as important as the macro and institutionalized cultures. You have said that "recombinant and participatory culture" is the dominant culture and that "dominant culture is fragmenting." Artists and non-artists alike are repurposing information and images at rocket speed. Talk about how and where you see this happening, how you think it is affecting the work of your students*, and how you see this culture influencing the future of art.

OW: I'm not sure it's so easy these days to locate or define the boundaries that exist between what we might think of as dominant culture and micro-cultures. If tens of millions of people watch a YouTube remix or are familiar with Grumpy Cat, can this really be called a micro-culture anymore? It used to be there was lag time between the emergence of a sub-culture and the point at which it was co-opted by popular culture, these days I'm not so sure that they aren't one and the same. That being said, I do think that culture today is of a more participatory nature and does seem to flow more from the bottom up.

As for my students, it's been my experience that younger artists are much less resistant these days to the idea of making work from imagery that already exists in the world. It used to be that students would use found imagery mostly to re-contextualize the content and comment critically on it. These days, if they do incorporate found images, it's often simply in service of some kind of remix or collage aesthetic; a piece of sky from here, a tree from there, a few seconds of video from a YouTube post, and so on. At this point, remixing is simply a given for most of my students. 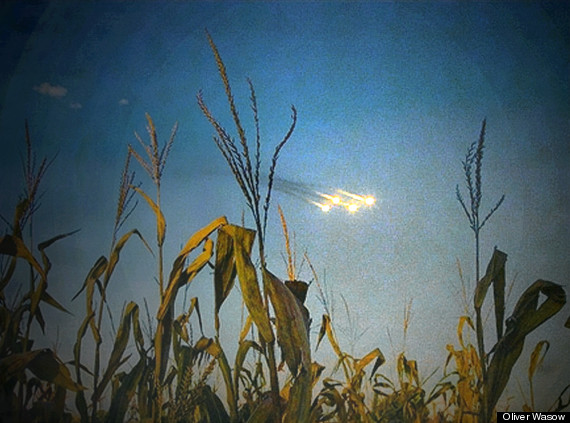 Field and Lights, 2009, Courtesy of the Artist, Oliver Wasow

TH: Museum curated exhibitions tend to show isolated works of art without the context of time or place within which they were created. You have often talked about some aspects of contemporary culture being an interesting addition to exhibitions of visual art, even having said that, "showing a "crocheted plant holder next to a painting" is exactly what we need more of." Can you elaborate on these ideas? Do you think that because so many of us spend a huge amount of time online, digesting huge amounts of information at a rapid pace, our need to see art in it's wider context is more important than ever?

OW: Really? Did I advocate for the showing of crocheted plant holders next to paintings? See, this is the problem with social media; one actually leaves a trace of the things they say. I guess I'll have to own that.

I do think that the kind of cultural fragmentation that the Internet encourages has been reflected in a move away from art movements and towards pluralism, which in turn has resulted in museums loosening their strict adherence to media specific compartmentalizing and historical narratives. And I think this is a good thing, absolutely. The experience of looking at, say, a Pollock painting, if it were in the same room as an Eames chair, a George Nelson lamp, a Chelsey Bonestall book cover, with maybe some Miles Davis on a turntable, would definitely be a richer one for the viewer.

In general, the move towards more audience friendly and dynamic programming, which some see as a dumbing-down, strikes me more as a healthy response to a culture that has access to massive amounts of information and no longer recognizes simple and sometimes arbitrary distinctions between high and low culture. 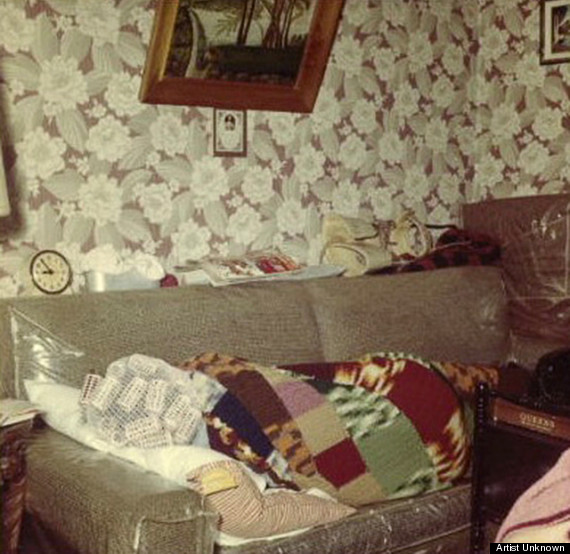 TH: You categorize the found/unauthored photographs that you post on Facebook and Pinterest into different groups; one of my favorites is called Sleepers. I think it is one of the most romantic and at the same time curious of the categories. Here we see pictures of people who have fallen asleep in a myriad of positions, some strange, others sweet, all with a sense of mystery; and at the same time we are very aware of the person taking the picture. There is an unknown entity that is shooting family, friends or even strangers when they are most vulnerable. I find these pictures intimate and an affectionate tribute to the subjects. Some viewers find this particular category creepy or voyeuristic. What are your thoughts about this particular grouping?

OW: The mystery of who took a picture is inherent to all found vernacular photos and as you say it's particularly pronounced in Sleepers. But this group also begs the question of WHY the picture was taken. Was it a lover wanting to remember their partner in repose, or perhaps someone looking to embarrass the subject later? Whatever the reason, this is a subject that pops up repeatedly. There seems to be something inherently appealing about the act of photographing the unaware subject. Perhaps its because it allows us to really look at someone when they're not hiding themselves, an opportunity, as you suggest, for unhindered voyeurism.

Organizing all these images found on the Internet into groups allows me to locate certain trends and typologies that are perhaps inherent to vernacular photography, but of course it also makes it possible for me to re-write history. If a person were to look at my collection, they'd no doubt come away with the idea that, say, cross-dressing or children smoking cigarettes were common activities in the early and mid Twentieth century. All of which is simply to say that my archive speaks to my own interests and preferences and is more a reflection of my own taste than an accurate cross-section of picture-taking practices of the 20th century. 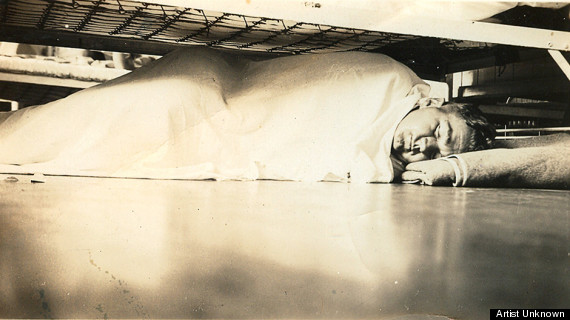 TH: In our previous conversation we spoke about your interest in removing an image from its original context and working with it in a new way. Your studio practice uses found pictures to create images that are reminiscent of painting. In yet another Facebook conversation you said, "...in many ways photography was born in painting, to which it is now returning." Upon reading this, I immediately thought of your own studio work. In what ways do you see painting and photography and manipulated imagery merging?

OW: On the simplest level, the diminishing veracity of the photographic image in the digital age is moving it closer to painting. But more than allowing artists to manipulate the overall structure of an image, new technologies let them incorporate pre-existing visual tropes and styles into their work. The application of the '1977' filter, built into Instagram, can instantly turn a picture taken in 2013 into an old faded snapshot. The historical specificity of a photograph, already a somewhat tenuous thing, has now been entirely severed. As time passes the "look" of these old analog pictures, the color, the format, the grain, etc, will become content in and of itself. Photographers are no longer tethered to one perspective or one style but can choose instead, like painters, to pick from a palette of pre-existing pictures to integrate into one image. Across the board the photo is becoming untied from its reference and is more fully entering the realm of the subjective and painterly.

*Oliver Wasow teaches at the School of Visual Arts, in NYC and The Art Institute of Boston at Lesley University 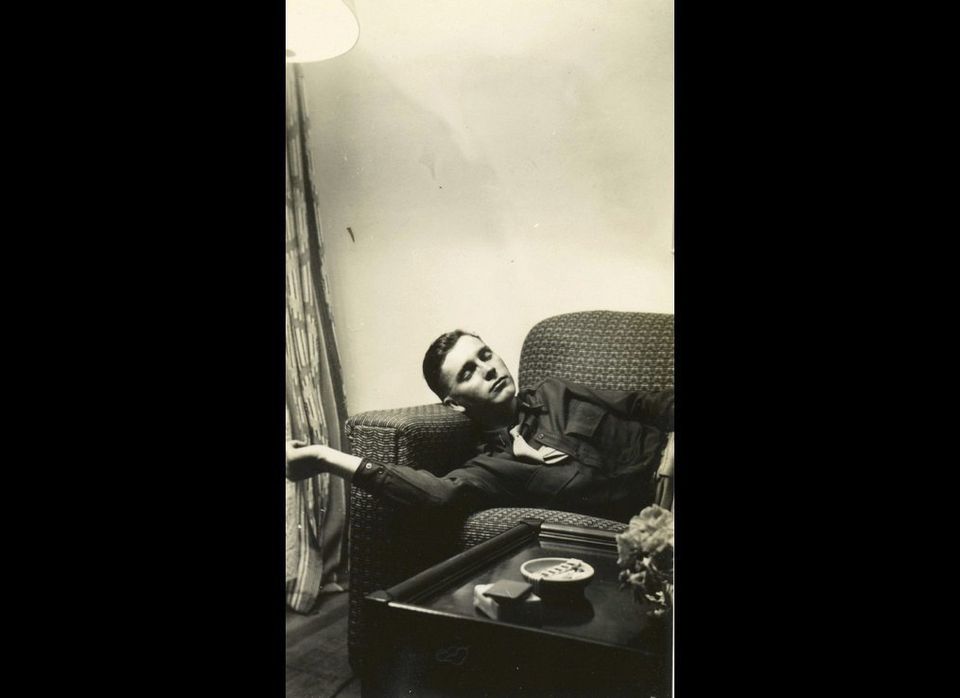