When my older kids were little, before my youngest was born, my then-boyfriend now husband sculptor Sabin Howard and I took them, and his daughter, to Rome. A few days into our jaunt, we climbed the Capitoline Hill and went to the museum there. My middle daughter ran around the great gallery of sculptures, pointing and yelling, “Peeny-weeny!” wherever the male genitalia were intact.

It did no good to point out to my beloved little hooligan that this was high art. She was six years old; the delights of pointing, staring, and laughing were not to be gainsaid.

I think of this incident regularly, whenever I encounter the juvenile inability to take in the nude human figure in the context of high art. Because Sabin is a classical figurative sculptor of some renown, and because we have friends who are also accomplished figurative artists, and because we live in a world where adults who, one might surmise, should know better, are still pointing, staring, and laughing, we encounter this from time to time.

In an earlier Huffington Post piece, I wrote of the iBookstore censoring a book cover of mine. My novel The Love of My (Other) Life boasts a saucy cover: a woman’s youthful, sinuous back, dropping into a plump, round ass. This cover art was deemed “inappropriate.”

I sent an email to the iBookstore explaining that there wasn’t even real nudity, just the fleshy part of a derriere, and that this image was artful, taken from a black and white photo.

The powers-that-be over at the iBookstore may have balked at another, more recent cover of mine, for my historical novel Broken. This cover is taken from a painting by the celebrated Italian figurative painter Roberto Ferri, a friend of Sabin’s. Ferri’s painting Liberace dal male shows a dark-winged angel pulling a snake from her arm. This is an extraordinarily fine painting of the highest caliber, and yes, she is nude.

The protagonist of Broken is a fallen angel, and the setting is occupied Paris, so I loved the angel for the cover of that book. The book was released in September, 2014, at which time it was also uploaded into the iBookstore. On September 23, 2015, I received an email from iTunes Connect informing me that Broken was now available on iBooks.

I hadn’t observed closely enough, but I surmise that the iBookstore took an entire year to approve that novel, based on the nude on the cover. (Note: this is conjecture.)

I am pleased to say that Broken has received many wonderful reviews, and that Foreword Reviews, the ‘Library Journal’ of independent publishing, included it among Best Fantasy, Spring 2015—an honor for which I did not pay. It was freely accorded. I point this out not to brag or for marketing purposes, but to point out, humbly, that the novel has some artistic merit.

I freely admit that Ferri’s ravishingly beautiful painting is the most artistic part of the novel, and I am grateful he gave permission for its use. 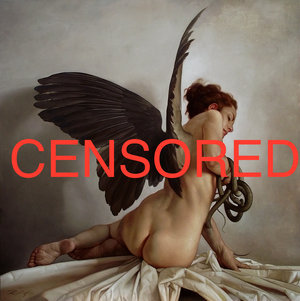 Here’s the paragraph that explains the Italian outrage:

Facebook’s rules, as we know, invite “respectful behavior” according to Zuckerberg’s laws, which clearly state: “We remove photos of genitals of people or portraying derriere fully in sight. We remove the images of female breasts where the nipple is visible.” Vice versa “photographs of paintings, sculptures or other art forms depicting nude figures are allowed.” But Ferri’s paintings are so realistic that they can be seen as photographs. Sgarbi wrote of Ferri: “He has in this instance surpassed the most able figurative painters in the duplication of reality.” He’s so able that someone has intentionally reported Ferri’s paintings as nude photographs. All it needed was a click on Facebook and the Facebook platform has taken the bait, with all the consequences.

Sabin and I recently ran into the same inability of the social platform to distinguish between art and pornography when Facebook refused to boost Sabin’s ads for his classical figurative drawing webinars and for our sculpture book, The Art of Life, whose cover shows nude sculptures. Tasteful, fine art, nude sculptures. “We do not allow sculptures that are nude,” wrote the Facebook ads team, when Sabin questioned the censorship.

I see it as a symptom of callow immaturity, and the corresponding rank stupidity—the social media version of my six-year-old daughter’s ridiculousness. It does bother me that images of violence can be seen on Facebook all the time, yet a stand is taken against high art. 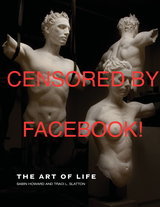 Sabin takes a more somber view. “Why be ashamed of the beauty of the human body, which is what we are about?” Sabin said to me. “It’s self-degradation, and relates back to the worst of modernism. Instead of celebrating the human body, the body is seen as something that is bad, to be hidden. It’s sad. Have we evolved from the fifteen hundreds and Savonarola?”