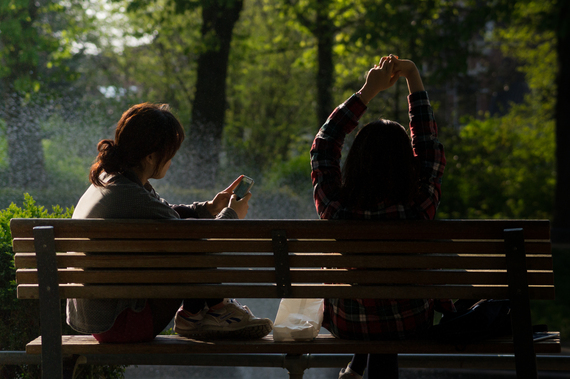 "Your twenties are the best time in your life. You have nothing to worry about yet." -- my delusional uncle, December 2010.

For some, it hits right after they're handed a college diploma. Set free in the "real world," they feel lost -- overwhelmed by their options and flailing around trying to figure out what to do with their degrees (all while dealing with a pile of debt). For others, the panic sweeps in a slow burn and sets in later. They watch as one by one, their friends get engaged or achieve professional success, leaving them feeling unsure of the decisions they've made, the path they've taken and ultimately, perhaps a bit inadequate.

While the term may have only been coined in recent years, it's become increasingly clear that the quarter-life crisis is a very real thing. The phenomenon, which can occur anytime between one's early 20s and early 30s, is characterized by disappointments, insecurities, loneliness and depression. And a study published in the International Journal of Behavioral Development found that 39 percent of men and 49 percent of women reported feeling such a crisis in their twenties. Furthermore, according to a survey conducted by Gumtree.com, 86 percent of young people admitted feeling under pressure to succeed in their relationships, finances and jobs before hitting 30, 32 percent felt under pressure to marry and have children by the age of 30, and 21 percent wanted a complete career change.

At a British Psychological Society meeting, researchers broke down the quarter-life crisis into five key phases based on their studies of various individuals who'd experienced one:

Of course the trigger -- and trajectory -- for these crises is slightly different for every individual. But on the whole, it's a remarkably similar experience, and in some ways, seems to have become a sort of rite of passage. In fact, I'm hard pressed to think of a single friend who I haven't witnessed experience some form of this phenomenon already. Some of us are still treading through it, just trying to stay above water. Some have made it through unscathed to the other side.

Lately I've been thinking about how different the life of a 20-something is now than it was 30 or 40 years ago, for our parents. Sure, some of that has to do with the economy/job market, changing social pressures, shifting gender roles, etc. But a lot of it has to do with technology. More specifically, it has to do with social media.

Log onto Facebook in your 20s and you're bound to see someone flashing their engagement ring. Check LinkedIn and you can't escape noticing your old colleague just got promoted. Scroll through Instagram and you might come across your college roomie vacationing with his or her S.O. at some chic resort in St. Bart's. Social media fuels our hunger for fantasy, and we can lose ourselves in it. But we're only seeing a carefully crafted slice of someone's life -- which they've probably slapped a filter on -- and it can make us feel like we're falling short when the fact is, we're not seeing the whole picture.

In short, many of us are suffering from permanent fear of missing out. "FOMO," which was added to the Oxford English Dictionary in 2013, refers to the feeling of "anxiety that an exciting or interesting event may currently be happening elsewhere." And certainly, for someone on the brink of -- or in the throes of -- a quarter life crisis, being constantly confronted with others' successes on social media will only fuel this.

So even though our parents may have been plagued by the fear that somewhere, someone is having a better time, thanks to social networks, we millennials have at our fingertips what we consider proof that someone has a better job, a better car, a better relationship, is making more money, etc. No surprise here: A 2014 study in the Journal of Behavioral Addictions found a correlation between higher social media usage and depression/anxiety. Furthermore, research by Psychology Today reveals that key themes in relation to the negative consequences of FOMO include self-identity problems, loneliness, negative self-image, feelings of personal inadequacy, disconnection and jealousy. Sound familiar? They're almost identical to the symptoms of the quarter-life crisis.

Is giving up on social media the answer? Not for everyone. Staying connected to people going through the same crises can be crucial for remembering that you're not alone in this, and better yet, that will you will get through it. The key seems to be a shift in mindset -- realizing that this phase of life is not one-size-fits-all, that the so-called life milestones ingrained in our brains by societal norms are certainly not anything to measure our happiness against.

At the core of the quarter-life crisis is the burning feeling that you need to already have achieved certain things by a certain age. Newsflash: you define your own success and happiness. And more importantly, the success and happiness of others that you think you're witnessing on social channels isn't necessarily a reflection of their reality. You don't know the incessant arguments those newlyweds are already having -- and they certainly wouldn't tweet about them. You don't know that your former fraternity brother who just posted on Facebook about his high-paying job is secretly miserable because he's working 14-hour days. You don't know what dreams the young, smiling mom with her Instagrams of the seemingly perfect family gave up on to have kids a little sooner than she was ready for. In other words, those people you think have it "all figured out"? They don't know what the hell they're doing either. It's just that people choose only to highlight the most glamorous snippets of their lives on these sites.

So instead of wasting time comparing yourself to others, spend it figuring out what's meaningful to you. What makes you tick. What kind of change you want to see in the world. And remember this: synonyms for the word "crisis" include a turning point, a crossroads. It may not feel like it, but this painful phase is the beginning of something great: taking your life back.