Within the past few weeks the ALS Association, a national non-profit organization fighting Lou Gehrig's disease, has successfully raised $115 million with the ALS Ice Bucket Challenge, an unprecedented social media phenomena. There is still no end in sight as the total increases daily. Naysayers wonder how dumping a bucket of ice water on your head can possibly benefit ALS, and skeptically point out the foolishness of wasting water when so many countries, and even our own west coast, are facing a shortage of clean drinking water. Still, hands down, this effort has set a new high on the social media success chart.

What we have witnessed is the potential of social media at its very finest. Although some people may remain unconvinced, social media as an entity can do great things. Using multiple genres, including blogs, websites, applications, small posts, and long diatribes, social media has the ability to reach ever-morphing targeted audiences. College kids prefer Instagram, parents prefer Facebook, and the business crowd prefers Twitter. If you are sending a message across age groups all these applications need to be effectively and efficiently considered.

I spoke with Paige Francis, chief information officer of Fairfield University in Fairfield, CT, about how the phenomenal success of the ALS Ice Bucket Challenge should encourage anyone still on the side lines of social media to get into the game. Paige is one of the most social CIOs on Twitter. According to Paige, both she and the Fairfield campus in general are all in, as they say in 'Vegas. When campus events or issues arise, students and faculty contact her directly via @FairfieldCIO. Tumblr has become the sole delivery vehicle for Fairfield University's ITS Annual Report; a cost-intensive paper accomplishment catalog is just not their style. Fairfield students created their own unique brand via Twitter: @SoccerGrlProbs. Even their resident turkeys have a Twitter handle @FUTurkeys. 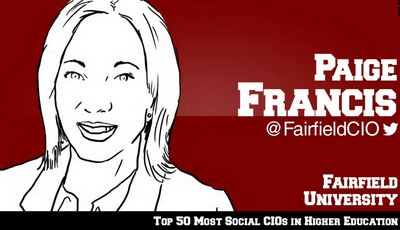 Paige herself migrated from personal-use only social media to business-use back in the summer of 2011. During a presentation at a SACUBO College Business Management Institute session, Paige says, "The lights dimmed and the stage was set for a YouTube video to begin, titled simply Social Media Revolution 2011. The numbers displayed and message contained were so compelling that, to this day, I annually revisit the video, now in its 2014 incarnation, as it updates."

Mobile and social is about a lifestyle. What makes Social Media so engaging is that it is mostly free and open 24/7. Each application is scalable and mobile. There are easy-to-use and easier-to-implement templates requiring no web development experience. Perhaps the last remaining aspect holding it back was uncontestable proof of its effectiveness. If the ALS campaign did not knock that doubt out of the park, nothing will. Social media goes well beyond simply sharing first day of Kindergarten photos with in-laws. It's a communication delivery vehicle with international access, more up-time than most in-house applications, and the ability to introduce and re-introduce messaging to any market in seconds.

With minimal online experience, a print newsletter can be re-targeted to the micro blogging platform Tumblr, eliminating print and distribution costs entirely. Trying to attract students or employees? Your business or school can join Instagram in seconds, upload images portraying the ambiance you are selling, and allow current and prospective users to share their photos as well. Trying to sell a product to like-minded individuals? If you can whittle the product description down to 140 characters, then you can Tweet it to your audience and peers. The reach will extend well beyond your direct contacts in the social media sphere, increasing your exposure exponentially, at zero cost and minimal effort. All that's needed is eye-catching creativity.

Successful social collaboration is hard work and must be purposeful.
Paige understands that bringing energy to social media can be difficult on many college campuses, despite the heavy usage by students. In many ways, it is like a parent trying to act cool by using teenage idioms in everyday conversation. They feel a part of the crowd, but still appear somehow odd. The first step to implementing a social media presence in any environment is to tie it into the overarching strategy and direction of the environment. Social media needs to complement the vibe of the place. Define the product and develop a marketing plan that incorporates social media. Publishing a social media policy is always a good idea to keep the overzealous from spinning out of control, while still allowing a framework and guidelines for best use. Any social media plan should be the yin of the marketing yang. Like two cohesive peas in a pod. Instill a visual branding, include perpetual and program-based hashtags with the message serving as the glue. Posts need to be deliberate and well-timed. To help, there are free social media scheduling tools, like Tweetdeck and Hootsuite.

In the future, every business will be a digital, social business. As a chief information officer, Paige is in perpetual awe of the power of social media and is always looking for ways to harness its power for the greater good. At what point in recent history has any tool with this amount of bang been introduced at a price point of zero? If our kids' use of technology is any indication of the direction that technology is heading, as both Paige and I believe it is, look for apps like Snapchat to put growing pressure on Facebook because of their light weight and fast speed.
If you have not yet brought social media into your professional setting, let the phenomenal success of the ALS campaign be your wake-up call. It is an absolute game-changer for marketing, communication, sales, and technology. Who would have ever thought a simple bucket of ice water could harvest such power and impact? Welcome to social media.

By the way, neither Paige nor I escaped the ALS Ice Bucket Challenge. Here are our videos: Paige ALS-IBC, Vala ALS-IBC.

This post was co-authored with Paige Francis, CIO Fairfield University.