In my recent post, "Social Media is Much More Than Just Social and Media," I introduced the concept of The Social Media Cube© as a visual representation of what is needed to utilize social media effectively in a marketing strategy. Instead of just "being" on social media pages, I urged marketers to think more about the cultural and anthropological underpinnings so that their strategies better take into account the nexus of the social relationship, type of message, technological object that delivers the message, and timing. 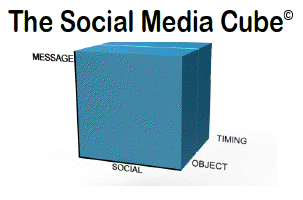 The concept of the cube garnered such a positive response that I would now like to take this a step further, and show that these elements apply not just to social media marketing strategies, but to marketing as a whole. The lack of an in-depth, multi-dimensional approach is why so many marketing and segmentation programs are not working today.

If you search the Internet you will undoubtedly find experts on Twitter marketing, Facebook marketing, video marketing, social media marketing, Pinterest marketing, influence marketing, and so much more. But none of these individual tactics will be effective because marketers and brands don't understand and take into account the two major Cube Components of object and timing.

Looking at a message and trying to achieve the same communication in each object or screen is increasingly myopic. Context is critical because more and more our attention is split between distinct activities in more than one device. It's about in which object the message is viewed and its timing, because we have different mindsets in different moments. Object goes back to understanding culture, because throughout history the objects we choose have always defined us, while timing relates to utilizing our constantly evolving understanding of the workings of the human brain. In traditional marketing, the belief was that the human brain is only capable of processing so much data and can be overwhelmed when too much information is thrown at it. The strategies some marketers adapt to address this seeming information-overload are to "dumb down" the message or distract the receiver with another topic while making points about their product or service.

Twenty-first century marketing, in contrast to this narrow-minded approach, understands what a truly marvelous machine the human brain is, with an infinite capacity for learning and accepting information. Our brains have plasticity -- the ability to interpret more complex messages, formulate opinions and make decisions faster than ever thought possible. Marketers who comprehend this capability can now appeal to both the rational and emotional sides of the brain to accomplish their goals.

What happens instead is that brands simply place themselves on a social network in an effort to engage potential consumers, and then fail because they are not using a multi-dimensional approach. Instead of connecting and engaging, they go at social media like they strategize advertising -- here's what we want to say and here's how we're going to do it. When it doesn't work, they end up blaming the network instead of acknowledging their role in failing to incorporate object and timing into their plan.

When Walmart first decided to establish a Facebook presence, the company was able to attract a large number of fans to its page based on reputation alone. But they didn't understand that their fans wanted to build a relationship and hold a conversation, and made the unwise move of restricting the comments option from their wall posts. Because their Facebook presence appeared to be little more than a one-way advertisement, the experiment failed miserably. In fact, Gartner recently predicted that failure to respond via social channels could lead to up to a 15 percent increase in churn rate.

McDonald's had the great idea of running a Twitter campaign with its #McDStories, hoping that users would post all their wonderful McDonald's stories and memories. What happened instead was that consumers saw this as an opportunity to post their negative experiences and complaints about the fast-food behemoth. McDonald's simply looked at the idea of being social, but didn't understand the meaning of context, when they went from the more general promotional language and hashtag of #meetthefarmers to a more personal #McDstories.

CMO Survey recently reported that only 6.8 percent of marketers believe that social media is "very integrated" into their strategy. Since it is estimated that around 6.7 billion devices will be connected to the internet within the next year or two, marketers really need to get on-board with understanding the cultural backdrop to measuring how influence motivates behavioral change.

Since building a brand is based upon establishing an intellectual and emotional relationship, marketers have to take the cultural context into consideration. Participatory marketing, where marketers don't just present information to consumers but involve them in the process, is where smart brands are headed. The social universe is a foundational planet for this work. Next level marketing is a multi-dimensional approach of context which wraps around a culturally relevant understanding of message, object and timing with the workings of the human brain and builds from there. It may involve digging deeper and really getting to know targeted consumers' world, but the results will be astonishing in terms of brand acceptance and marketing success.