The definition of socialnomics is the building of a brand through the combined use of social media. The end result is web traffic and increased exposure. Key drivers like facebook, twitter, Instagram, etc. have increased the visibility of brands, but also the visibility and status of everyday people.

It's hard for me to imagine a world in which you are reading this and are not familiar with someone like Justin Bieber, who was discovered on Youtube by his now manager Scooter Braun, who then introduced him to R&B star, Usher.

Social media has opened up a new way for the average Joe to be seen and in some aspects, it has evened the playing field for celebrities and the average Joe.

One of these average Joe's is a Canadian bred firefighter named Marshall Perrin. 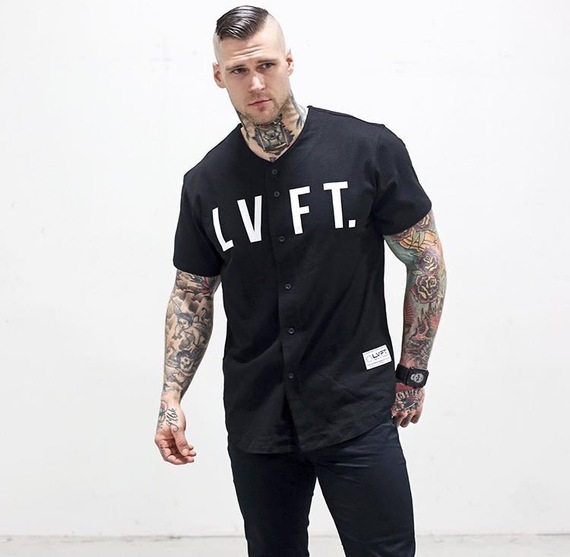 But, I wouldn't call him average. At 6'4, with striking good looks, and fair-skin that's tatted from neck to waist, he definitely stands out in a crowd. With over 240,000 followers on Instagram (and growing), Marshall seems to be well on his way to mastering the art of building a brand on social media.

When I met up with Marshall, I can admit I didn't expect to meet the person I did. He's an extremely handsome man with a visibly tough outer layer, but I quickly discovered that his outer layer is so tough because it's holding something very unique and positive within.

Marshall Perrin: Well, I had heard of Instagram and like any app I usually take a while before I get on it; like snapchat- it took me forever to get on it. So I was aware that Instagram was there, and one of my friends mentioned that I should get on it and I did. When I first started I posted the normal stuff like pictures of me, friends, and my family, but about two years ago I got back into weight lifting and I started posting about my progress and that's when I noticed my following start to grow. A lot of people were into my tattoos to start off, but once I started posting my fitness progress that's when my followers really started to grow. A lot of people related to the fitness side of things- they really liked those posts.

D'Arcy Brishon Carter: So when you first joined Instagram did you think you would become so popular?

MP: I'm going to say no, because I didn't really envision using it as the platform that it is now for exposure, and really all kinds of opportunities that can come from social media now. But once it started growing a little bit -not to sound cocky or too confident, but to be perfectly honest, I would look at the pages of people with 100,000 followers, 200,000 followers -whatever it be and wonder how I could hit that level myself. That's when I started putting the time into my Instagram page and kind of realized that it is a very good tool to use these days to show the world who you are, and what you're about. I just kept it real and posted stuff that I cared about- showed my fitness progress, and now after 2 years here we are at over 200,000 followers.

DBC: Wow. I joined Instagram 2 years ago too and I think I have 50 followers...

MP: (laughs) You have more than that!

DBC: Barely... (laughs) What are some of your ambitions? What would you like to see happen from your success on social media?

MP: Well, I'm still learning all the possibilities and avenues that can come from it. Right now I'm just going with the flow and enjoying the opportunities that come my way, but I do have ambitions. This year I would like to do more modeling, and in the future maybe get into acting down the road- whatever comes my way. Also, I do want to own a successful business- that's a big goal of mine. With Instagram there's all types of exposure for businesses and stuff like that as well. Maybe something like my own clothing line.

DBC: Your own clothing line? Yeah, I could see that...

MP: Yeah, I'm really into fashion. I like good cuts on t-shirts and clothing. Being a little taller- I'm about 6'4- a lot of the time I haven't been able to wear designer fashion like G-Star and Diesel because it doesn't fit me very well, so I want to design my own tees and clothes that will fit a longer person, per se.

DBC: With your eye, following, and burgeoning popularity, that could certainly happen one day...

MP: (laughs) That would be nice! 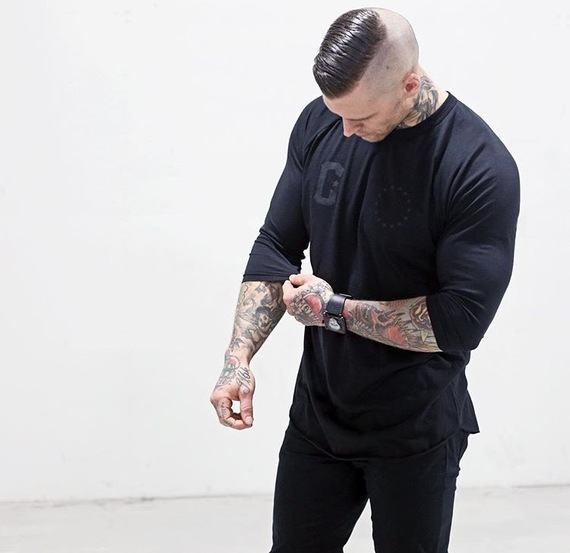 DBC: I'm serious, and I say that because we have seen how social media can elevate the average person to "celebrity" heights. Do you agree that platforms like Youtube, Instagram, and twitter have evened the playing field for celebrities and people like yourself to achieve similar levels of fame?

MP: I do think it has evened the playing field, so to speak. It all depends on what you consider to be "celebrity" status in my opinion, but we've seen people build their Instagram page from zero to over a million followers and create all kinds of opportunities for themselves. Whether it translates into acting or modeling, or anything that could be the next step up to really change your career, and your life. So in that aspect I think it really has changed things.

DBC: (smirks) Do you consider yourself "celebrity status"?

MP: (laughs) I've never really considered that in my day to day life. So by no means do I think that just because I have that number beside my name on Instagram that I'm above anybody else, or anything special.

DBC: You have plenty of followers who would disagree with you...

MP: (laughs) ... I am glad that you brought that up because I really do appreciate all the love that I get from my following. It's crazy and surreal to me to think that I live in a town of about 60,000 right now, so to think that there's about 4x that following me on an app is so crazy to me.

DBC: What do you enjoy most about the social media experience?

MP: Well, like I said I realized quickly that people were being motivated by the fitness content on my page and I kind of fed off that motivation. Honestly, I like helping people- it's an everyday part of my job as a firefighter. All the comments and kind remarks that are left on my page motivates me as well, and I don't think my followers know that.

DBC: So essentially the experience is advantageous for you and the audience...

MP: Oh yeah! The feedback gives me motivation because I can understand where people are coming from when they are unhappy with themselves or where they are in life. I wasn't always happy with myself and what I was doing, so once I found the gym I felt like I found myself and came into my own again. It's not just the strength and toughness you get from the gym physically, but just mentally. I felt stronger mentally as a person.

DBC: Speaking of your feedback... you get some "interesting" comments. Do you read them?

MP: (smiles) I love my following and I do read majority of the comments. I try to reply back to as many as I can.

DBC: How do you handle the negative ones?

MP: Like I said, I appreciate all the love I get but some people take it a little too far in my opinion. The thing is, when you're posting your life on social media there is always going to be someone commenting or hating, and sometimes it's not intentional, but it can be ridiculous. And I'll be honest, my mom does follow my Instagram page. (laughs) Shout out to my mom! I love my mom... and some of the comments I don't want her to see. I mean she's a strong woman, but no one wants their mom reading stuff like that.

DBC: What do you wish your followers knew about you?

MP: I know a lot of people don't know who I really am. They probably have their opinions of who they think I am, maybe just based off of my appearance. It's not even just with social media- it can be people in general. I don't know if I have some kind of rough exterior since I'm a big guy, or because of my tattoos, but I'm a pretty chill guy. I like to keep it real and chill out, relax, have a good time, and be free. It's hard to get to know who people really are on social media, anyway. You can't really grasp who someone is that way.

DBC: I agree. People are two dimensional on social media- you don't get to see the real.

MP: Yeah, exactly. So I do wish people could see the softer side of me- I don't know, I think there's one. (smiles)

DBC: Oh, there is. I'll say that. You're like a big tatted teddy bear!

MP: (laughs) I have heard that before. I'll roll with that!

DBC: So how would you describe yourself in 3 words?

MP: 3 dream girl qualities... (Behind-the-scenes note: This is where Marshall shifts in his seat, turns fire engine red, and smiles)
Well... I don't believe that I have a type. I think many things can be attractive to me. I mean obviously you need to be physically attracted to the person in some way, but personality is huge for me. Being able to carry on a good conversation is ideal. Sense of humor is huge for me also, and I need to feel like I can be myself around my dream girl, obviously. I like to joke around- I'm not always very serious. So yeah, that's the top qualities of my dream girl: fun, funny, being able to have a good time together, and I want someone driven. Someone who wants to grow better together.

DBC: Does she need tattoos?

MP: (laughs) I get asked that a lot because I have so many, but no, she does not. Obviously, I love tattoos- I appreciate tattoos, so having them doesn't hurt but it's not a requirement or anything.

DBC: Did you ever think you would be answering questions on a platform like this simply for downloading an app?

DBC: Well you mentioned earlier how people have moved up in status because of social media; people like Justin Bieber and others. Do you see yourself reaching that level?

MP: I mean anything is possible, but like I said I don't strive for that- I'm just enjoying the moment and the opportunities that come along with it. Nothing wrong with that right? 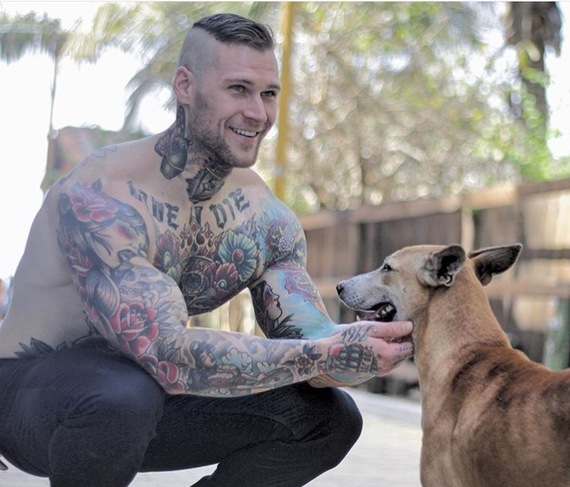