"Come out, come out, wherever you are."

Support for LGBTQ rights has never been higher in the United States, and the movement for full inclusion is driven by overwhelming support among young people. More than 80 percent of us under the age of 30 support the recognition of same-sex marriage, and that should be no surprise. A powerful byproduct of our connectedness is that the LGBTQ community is more visible than ever, and many people with anti-LGBTQ opinions have found themselves with digital relationships that humanize the unfamiliar. Currently, approximately 70 percent of people on Facebook in the U.S. are connected to a friend who has expressly identified themselves as gay, lesbian or bisexual on their timeline.

That's a whole lot of people. 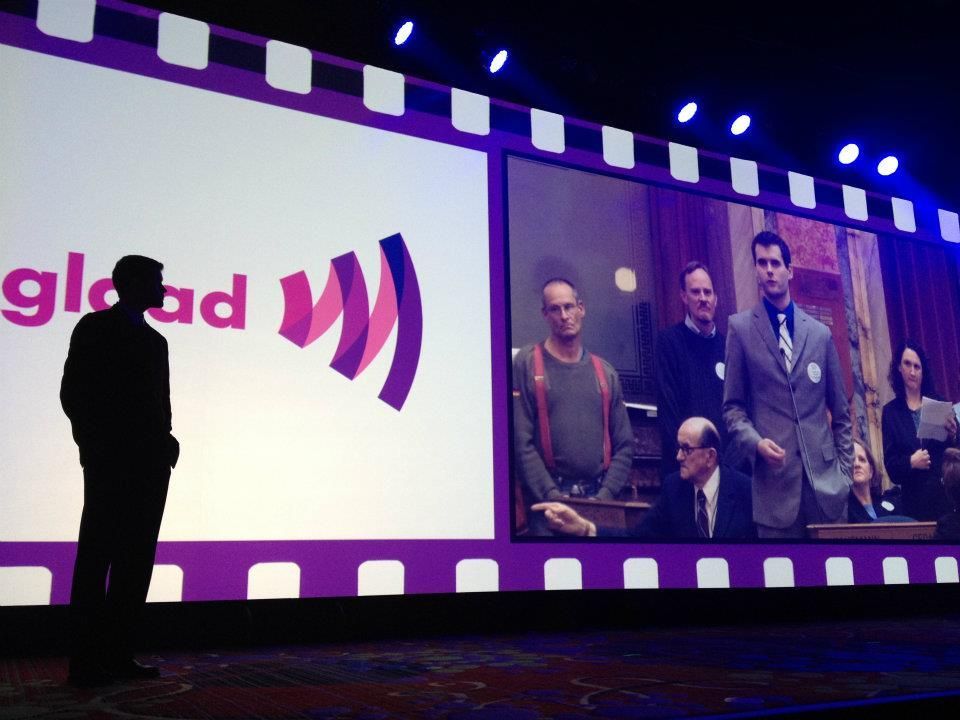 Zach Wahls looks on as the video that propelled him into the national spotlight plays at GLAAD's 2012 New York Media Awards.

Coming out of the closet has been made easier, too. As more people come out - often online - the safer those who are still in the closet feel about coming out, and find the courage to do so. Social media has become a powerful driver of this because of the safety zone it creates, a halfway space between in-person conversation and anonymous exchange. Translation: There are some things that are just a lot easier to say over Facebook.

Sometimes it makes more sense to type out and edit our thoughts rather than trying to sit someone down for a conversation. Once you've actually hit send, that conversation always becomes much easier to have in person, too. 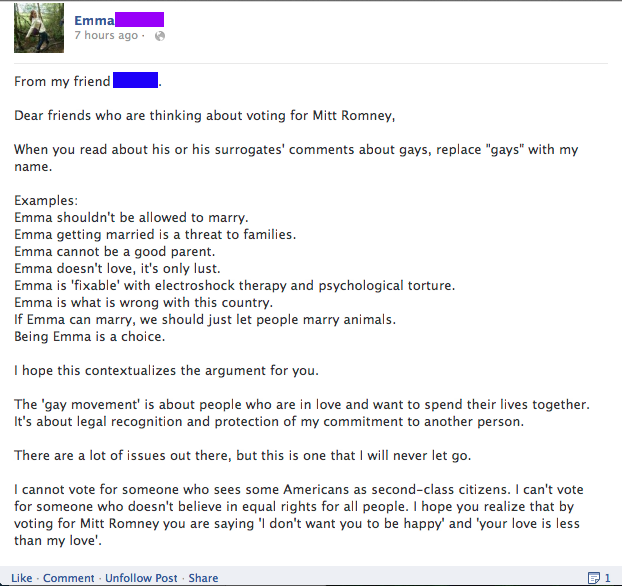 Emma, an anonymous Facebook user, shares an open letter to her FB friends.

Today, it's in vogue to claim that Facebook, Twitter, Reddit and other social media outlets aren't actually that powerful, that they are fads with little to no meaningful efficacy. I'm 21 years old with only a high school diploma to my name. I won't pretend to be an expert on the machinations of power or technological trends, but I can speak with confidence about the power of social media. I've experienced that power firsthand, and my life has changed dramatically because of it over the last two years.

On the afternoon of Tuesday, February 1, 2011, I was working in my cubicle -- that is to say, I was catching up on The Daily Show -- at my part-time IT job when a coworker walked over and asked me if I'd seen Facebook. Confused, I followed her back to her computer where she showed me her News Feed.

It was filled with posts from her friends sharing a link to a YouTube video of the speech I had given the night before in front of the Iowa House Judiciary Committee at a public hearing on gay marriage. I didn't realize it at the time -- it would sink in less than 24 hours later -- but I was watching myself go viral in real time as the likes and comments popped up on Angie's screen. 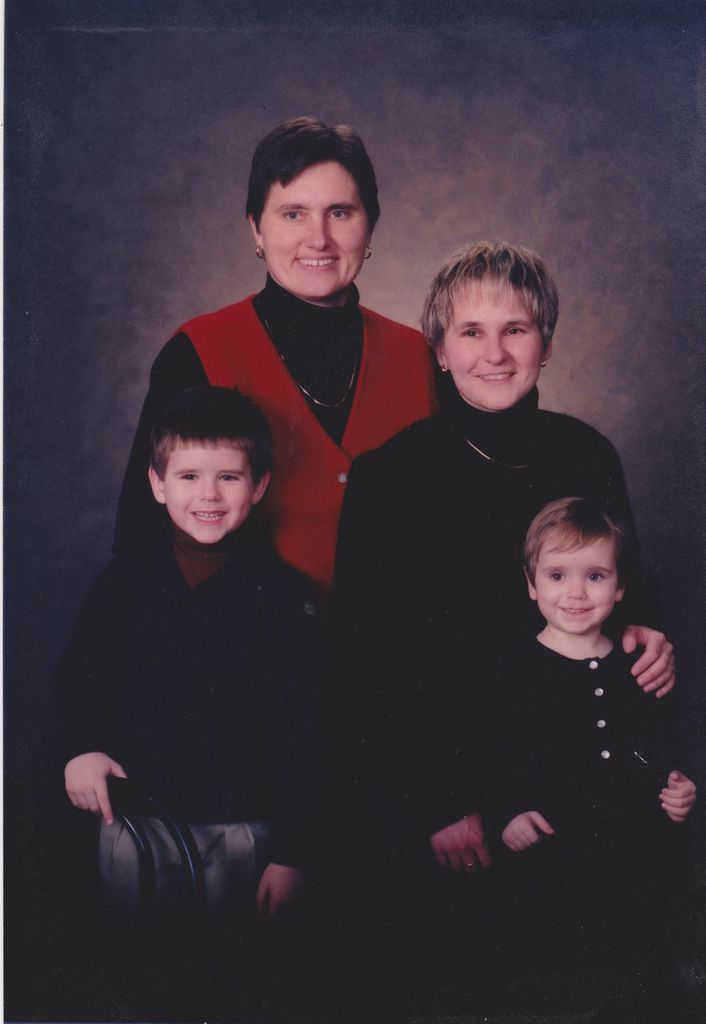 When I sat down to write the speech that was -- unbeknownst to me -- about to change my life, I hadn't written it for anyone outside that public hearing. I had written it because I was scared. I knew how important the freedom to marry was to my moms, and the possibility of that freedom being stripped away was terrifying. The possibility that it could be denied to countless other Iowans was unacceptable. Our lawmakers were supposed to protect their constituents, not assail their God-given and Constitutionally protected rights.

I was shocked by the response. No one had told me that I was being recorded, let alone that the video had been uploaded to YouTube. It wouldn't be until later that night, as I read Facebook messages from people I'd never met thanking me for my words, that I realized my speech might have had a bigger impact than I'd intended.

Two and a half years later, the social channels responsible for igniting the popularity of my testimony continue to affect my life in ways I have trouble predicting. When I started Scouts for Equality, a campaign to end the Boy Scouts of America's ban on gay youth and parents, a Facebook status led to the hiring of our senior campaign director. We've since become close friends IRL as well. Earlier this year, I joined millions of other Americans in changing my various profile pictures to a red equal sign to signal support for LGBTQ rights as the U.S. Supreme Court heard oral arguments on two potentially landmark cases. 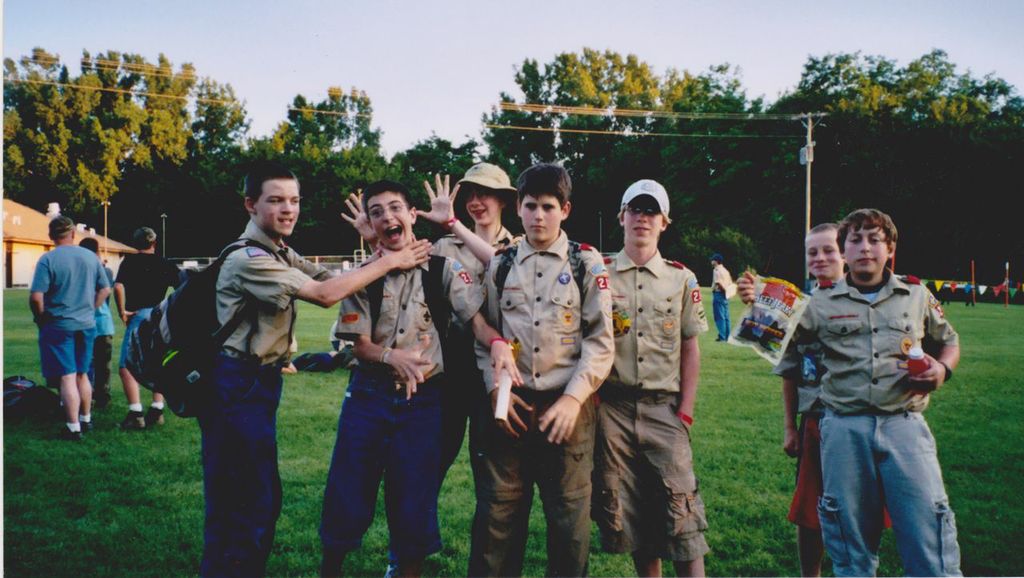 Zach's childhood scout patrol poses for a portrait during a camping trip in Eastern Iowa.

As these profile pictures turned red, we knew that it wasn't enough. Standing up for civil rights isn't just about hashtags and profile pictures. It's about creating community, securing safe spaces and recognizing our shared humanity. It's about empowering people so when we happen to find ourselves in situations where we can make a difference -- knowingly or unknowingly -- we have the strength and courage to do so.

And while publicly sharing a status about why you think LGBTQ rights are important or changing your profile picture isn't the end-all, be-all of advocacy, it gets us one step closer to Harvey Milk's charge for both LGBTQ people and allies to come out, come out, wherever -- and whoever -- we are.

---
Zach Wahls is the executive director of Scouts for Equality and a LGBTQ activist.