There is a social networking experiment in the Gulf Coast region that may just prove to be the best mapping tool for the catastrophic results of the April 20 explosion of the Transocean/DeepwaterHorizon well platform. The Louisiana Bucket Brigade, a health and justice organization in New Orleans, is asking residents of the Gulf Coast to report fisherman out of work, endangered wildlife, oil on shore, oil sheens, health impacts and other problems using a new tool known as the Oil Spill Crisis Map. "The Oil Spill Crisis Map compiles and maps eyewitness accounts of the oil's effects in real time," said Anne Rolfes of the Louisiana Bucket Brigade. "This is a tool for all of us to understand the extent of the damage."

Five days after launch, the Oil Spill Crisis Map is giving a glimpse of how life along the Gulf Coast has been affected by the British Petroleum oil spill. MSNBC documented one family business that has been ruined.

According to Anne Rolfes, it is apparent that the reaches of this spill are already widely felt. "Over a hundred reports have been filed and we have only just begun to get the word out, " said Rolfes.

The Oil Spill Crisis Map is a tool that visualizes reports made via texts, emails, tweets and the web on the effects of the Gulf Coast Oil Spill across time and geography. This public, web based map was created by the Louisiana Bucket Brigade in partnership with Tulane University Disaster Resilience Leadership Academy. The Oil Spill Crisis Map utilizes the open source software platform called Ushahidi, meaning testimony in Swahili, which was developed by Kenyan bloggers to track and record post election violence in their own country. Since then Ushahidi has been used in several emergency situations, including the 2010 Haiti Earthquake.

The map tracks several categories of reports on how the oil spill is affecting the environment, health and lives in the Gulf Coast region. The most prominent category thus far is "Livelhood Threatened." Fishermen, shrimpers, and oystermen have logged in including a commercial fisherman from Gautier, Mississippi who cannot fish. An oysterman in Bootheville reports being forced to eat off of the Red Cross truck because of his diminished income. New Orleans residents from all areas of the city are reporting "chemical smells." 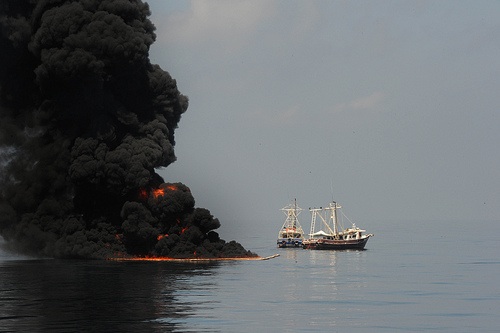 May 6, 2010) -- Two fishing vessels drag an oil boom after trapped oil is set ablaze in the Gulf of Mexico May 6. The U.S. Coast Guard working in partnership with BP PLC, local residents, and other federal agencies are conducting "in situ burning" to aid in preventing the spread of oil following the April 20 explosion on Mobile Offshore Drilling Unit Deepwater Horizon. (U.S. Navy photo by Mass Communication Specialist 1st Class(SW) Jeffery Tilghman Williams/Released)

With the oil spill growing larger everyday, the Louisiana Bucket Brigade urges residents of the Gulf Coast to report their own eyewitness accounts of the impacts of the BP Oil Spill. "With these reports we hope to learn the extent of the damage and provide useful information on where help is needed most, " Rolfes said. 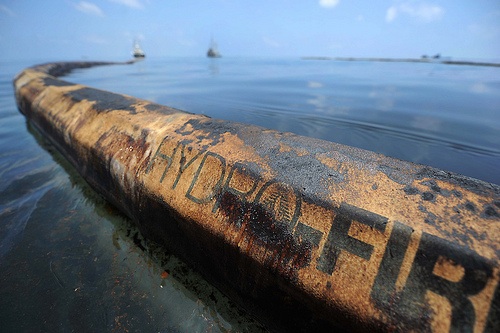 Reports can be made and viewed at the website. Mobile phone users can text reports to (504) 27 27 OIL. Reports can also be sent to bpspillmap@gmail.com and through Twitter with the hashtag #BPspillmap.

Eyewitness reports for the map require a description, and location information such as address, city and state, zip code or coordinates. Reporters can remain anonymous or disclose their contact information. Photos and video can be uploaded via the web.