In the banking scandal du jour, HSBC managed to prove that our banks are not only too big to fail -- they're also too big to jail. Between the financial crisis, casino gambling, outsized bonuses, rate fixing and now money laundering, it's remarkable how much trust has been destroyed in such a short time. In the last six years, the public's opinion of the banking industry has dropped by over 60 points -- an almost unprecedented feat. Small wonder then that even the Wall Street Journal is beginning to call for the largest banks to be broken up. 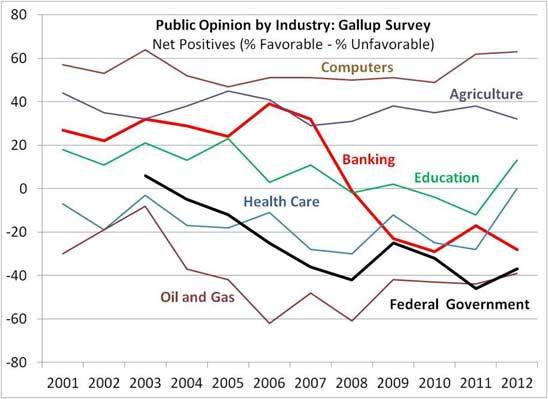 But this banking crisis is just one symptom of a deeper problem. Along with increasing inequality, the hollowing out of the middle class and environmental degradation, there's an increasing sense that something's gone wrong, not just with a few individual companies, but with the system itself.

However, given all the urgent demands executives face, how can social responsibility ever become a real priority? From a practical perspective, how can companies actually focus on anything more than just next quarter's results? We're not just talking about a PR campaign or a new mission statement. We're talking about a new way of doing business. We're talking about deep change. As John Mackey, the CEO of Whole Foods puts it:

The whole corporate social responsibility ideal is trying to graft something onto the old profit maximization model. What we need is a transformation [in] the way we think about business, what it's based on. People want businesses to do good in the world. It's that simple.... We need a deeper, fundamental reform in the essence of business.

Regulation isn't the answer -- we can't legislate enlightened leadership. Nor does it work for us to come up with a list of moral prescriptions for why companies "should" change. Instead, change has to start with executives and entrepreneurs who genuinely want to create
companies that care
, and are looking for practical initiatives to improve both
how much
money the company makes and
how well
they make it. Here are six proven areas where they can do so.

The bottom line is that in order to create long term success in the 21st century, companies need to have employees that care, customers that care, leaders that care, and a government that cares. These needs, and the six initiatives they drive, are essential goals any executive can get behind. They're pragmatic reasons to create companies that care.

At the same time, creating a Company That Cares cannot be accomplished just from the outside-in. While effective leadership and cultural development are best driven and measured from the outside-in, they have to be developed simultaneously from the outside-in and the inside-out. It's not enough just to ask people to change what they do. Ultimately, it's also about helping them change who they are. It's about inviting them to bring their whole selves to work, and encouraging them to help others do the same.

What are your thoughts on this topic? Please add your ideas and experiences to the conversation below.