Hillary Clinton and Tim Kaine have just released a new book, Stronger Together. In that book, which sets out in clear terms their policy positions, Clinton and Kaine take a strong stance to expand, not cut, our Social Security system.

Clinton and Kaine recognize that expanding, not cutting, Social Security is an effective and sound solution to a number of challenges facing the nation. Numerous Democratic Senators and members of Congress have sponsored and co-sponsored around a dozen Social Security expansion bills, scored by the Social Security Administration's Office of the Actuary, that give specifics to the profoundly wise policy.

Accurately and insightfully, Stronger Together points out that the debate over Social Security is distorted by "years of mythmaking, claiming we cannot afford Social Security and that the only solution is to cut the benefits on which 90 percent of American seniors rely."

In stark contrast, the Republican Party has failed to clearly and openly advocate their true position, because they know it is unpopular. Instead, Republican politicians routinely resort to dog whistles and fear to perpetuate the myth that Social Security is unaffordable and must be cut.

This destructive myth was not created innocently or by accident. Peter G. Peterson, a Wall Street hedge fund billionaire, has spent hundreds of millions of dollars and over three decades attempting to undermine confidence in our Social Security system, seeking to convince young people that Social Security is bankrupting their futures and will not be there for them.

Social Security ... threatens the entire economy. In the recent election campaign...[n]o one dared to say that without major reforms--including "cuts"--the Social Security system will run huge deficits, that these deficits will push our children into a situation of economic stagnation and social conflict and create a potentially disastrous situation for the elderly of the future.

Ironically, in 1982, I was one of those young people Peterson was supposedly trying to protect, but in truth was seeking to scare and turn against the old. His fear-mongering about Social Security has not changed in the last three decades; all that has changed is that there are new young people to "protect" from old people, like me, who are apparently ruining their futures. By virtue of the passage of years, I have gone from victim to victimizer.

Pete Peterson isn't the only billionaire pushing the myth that Social Security must be cut. Other billionaires, including the Koch Brothers, also have dismantling Social Security at the top of their priority list. It's not hard to understand why: As our nation's most successful government program, Social Security is the number one showcase of why their radical anti-government ideology is flat out wrong.

The truth is that whether we expand or cut Social Security is a matter of values, not affordability. We are the wealthiest country in the history of the world at the wealthiest moment in our history. Expanding Social Security, and closing the program's modest projected shortfall, still decades away, would require only a small increase in the percentage of our GDP we spend on it -- lower than the increase in military spending after the 9/11 terrorist attacks, and significantly smaller than the increase in spending on public education when the baby boomers were schoolchildren. As Clinton and Kaine propose, we can easily fund an expanded Social Security by requiring the wealthiest among us to pay their fair share.

Clinton's and Kaine's Stronger Together represents an important contribution to the literature about Social Security. It pulls back the curtain, exposing and repudiating the lie distorting the Social Security debate. Indeed, the book's very title is a celebration of the communal values that underlie our Social Security system.

Social Security recognizes that all of us face common economic risks. Rich or poor, any of us can suffer a devastating, disabling accident or illness. Rich or poor, any of us can die prematurely, leaving young children behind. Rich or poor, all of us hope to grow old. When we do, we need, for a dignified and independent retirement, a guaranteed steady income which we cannot and will not outlive. Social Security recognizes that the best way to protect ourselves and our families against the economic consequences of those risks is to join together and pool them, sharing both our risks and our responsibilities. Stronger together.

A reading of the Democratic Platform reveals that it is not just the presidential and vice presidential nominees who value Social Security. As we've laid out in our annotated version of the platform below, the document makes it clear that the Democratic Party is united in support of protecting and expanding Social Security benefits. It pledges that Democrats will reject, and fight tooth and nail to prevent, all cuts to Social Security. It also correctly points out that the program's yearly cost of living adjustments do not reflect the real costs (such as high health care expenses) seniors face, and that it is time to improve the accuracy of the program's measure of inflation so that the value of Social Security benefits does not erode over time. 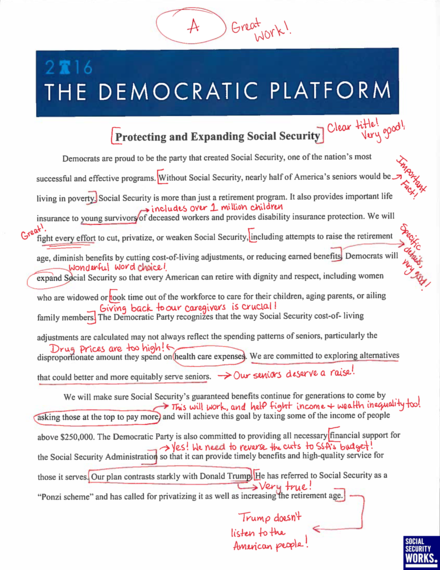 The Republican Platform's Social Security plank avoids taking a clear stand, but a close reading reveals it's simply a coded version of Pete Peterson's and the Koch Brothers' goal of dismantling our Social Security system. The Social Security plank states that Republicans "believe in the power of markets to create wealth" which is code for privatizing Social Security, a dangerous scheme that was resoundingly rejected by the American people when George W. Bush proposed it in 2005.

It also states that "we oppose tax increases" which means that they oppose requiring the wealthiest Americans to contribute their fair share and want to see the American people's earned Social Security benefits drastically cut, instead. It seeks to buy off seniors by stating that "current retirees and those close to retirement can be assured of their benefits" which, by its omission, means cutting benefits for younger generations of Americans. This attempt to buy off seniors is straight out of the anti-Social Security playbook, set out in 1983 in a revealing article entitled, "Achieving Social Security Reform: A Leninist Strategy."

This obvious, transparent attempt to buy off older voters is highly demeaning to those very older Americans. The Republican Party brazenly -- and mistakenly --assumes that seniors care only about themselves, and will be fine if their children's and grandchildren's economic security is decimated, as long as they themselves are protected. As Republicans should have discovered when they used this same tactic in their failed effort to privatize Social Security in 2005, seniors care about the security of their families, even if the Republican Party does not.

For those not deeply engaged in the Social Security debate, here is an annotated version of the Republican Platform, to help you decipher the code: 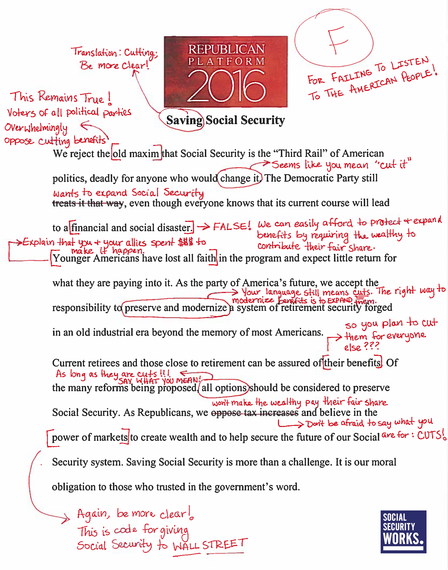 As for the Republican Party's standard bearer, Donald Trump, he rarely talks publicly about Social Security. When he does, it's to claim that he "won't touch it." But there is a mountain of evidence that, like so much of what comes out of Trump's mouth, this is a blatant lie.

For starters, Trump's campaign had no objection to the GOP platform's anti-Social Security stance. This stands in sharp contrast to changes they insisted on in other sections of the platform, such as the immigration plank.

Moreover, in Trump's own past writings, he has referred to Social Security as a "ponzi scheme," said that "privatization would be good for all of us," and called for raising the retirement age to 70 because "how many times will you really want to take that trailer to the Grand Canyon?" His vice presidential pick as well as his top policy advisers -- men who've spent decades trying to cut and privatize Social Security -- reflect the same disturbing views. One of those advisers, Sam Clovis, told a room filled with GOP establishment figures and Wall Street donors that a Trump administration would be open to Social Security cuts.

But Trump knows better than to talk about cutting Social Security publicly. Back in 2011, well before his current run for President, Trump said that he opposes Republicans running on Social Security cuts because "They are going to lose elections."

For once, Trump is right. Voters across the political spectrum overwhelmingly oppose cutting Social Security and support expanding benefits. That's why Trump keeps insisting he "won't touch" Social Security, and why the Republican platform's support for cuts is written in carefully coded language. Their messaging is designed to muddy the waters so voters don't know who the real supporters of Social Security are.

The good news is that, by taking a clear and strong stance in support of expanding (and never cutting) Social Security benefits, Hillary Clinton and the Democratic Party have made it far more difficult for the GOP to bamboozle voters than in previous election cycles. The difference between the two Parties on Social Security is stark.

I predict that seniors, as they realize each Party's Social Security position, will vote Democratic this year. And that will be a public service to all of us. Having lived so long and witnessed the economic insecurities inherent in a modern economy, they are in the best position to understand the importance of Social Security. When they vote for Clinton and the Democrats, they will be voting to protect and strengthen all of our hard-earned Social Security benefits.