Social Security was signed into law eighty years ago, on August 14, 1935. In those eight decades, it has taught us a number of important lessons.

Social Security has also taught us that some people hate government no matter how effective it is, and will say just about anything to prevent its good work. Indeed, these opponents of government fight hardest when a government program works well, because it undermines their bias that government is the problem, when government is, in truth, often the best or even the only solution. And so they really hate Social Security. It works so extraordinarily well that it is a shining example of government at its best.

Social Security has transformed the nation. Before Social Security, growing old was something to be dreaded. In 1912, a writer described what it was like to grow old:

"After the age of sixty has been reached, the transition from non-dependence to dependence is an easy stage - property gone...ambitions collapsed, with death a final and welcome end to it all - such conclusions inevitably sweep wage-earners from the class of hopeful independent citizens into that of the helpless poor."

The vulnerability of workers which underlay those words confronts today's workers and their families,, as well. Almost all Americans are dependent on wage income, and so are vulnerable to the loss of those wages. To have even some small measure of economic security, workers and their families need insurance against the loss of those wages. To protect against lost wages due to disability, they need disability insurance. Workers who have dependents need life insurance. Those who are fortunate enough to live to old age need steady, guaranteed income that they cannot outlive. Social Security provides protection in all three eventualities - death, disability, and old age.

At the time Social Security was enacted, orphanages had children who had a living parent who was unable to support the child after the death of a working parent. Every state but New Mexico had poor houses, the majority of whose "inmates," as they were often called, had been independent workers most of their lives but once they aged or were struck by a disabling illness or accident, they had no choice but to go to the poorhouse, unless their children or other relatives took them in.

So prevalent was the fear of growing old that the first Monopoly boards had a space labeled the Poorhouse. If you were unlucky, that's where you landed.

But Social Security has changed all of that. Fifty-nine million Social Security beneficiaries now receive a guaranteed, predictable monthly replacement of wages. And almost all working families are insured against lost wages. Unlike savings, this is income that cannot be outlived. It is adjusted annually to prevent its erosion as the result of inflation. It provides benefits as a matter of right to displaced homemakers and other divorced spouses. It is completely portable from job to job. And it is secure, since its plan sponsor is the federal government which will not go out of business and is not dependent on turning a profit. And it is incredibly efficient, spending less than a single penny of every dollar on administration. No private sector arrangement offers those features and that efficiency. Social Security's wage insurance can only do all of that because it is run by the federal government.

Rather than fearing old age, many workers today look forward to retirement as a time to be free of backbreaking labor. Perhaps no better metaphor of Social Security's effectiveness is the Monopoly board. The very same spot on the board that used to be the Poorhouse, a place you landed if you had bad luck, now is Free Parking, a place to rest, if you are lucky.

So why, after eighty years, doesn't everyone recognize Social Security's success and support increasing its modest benefits? Those benefits are low by virtually any standard. As just one measure of the inadequacy of Social Security's benefit despite our nation's wealth, the following chart shows how those benefits compare to those of other countries: 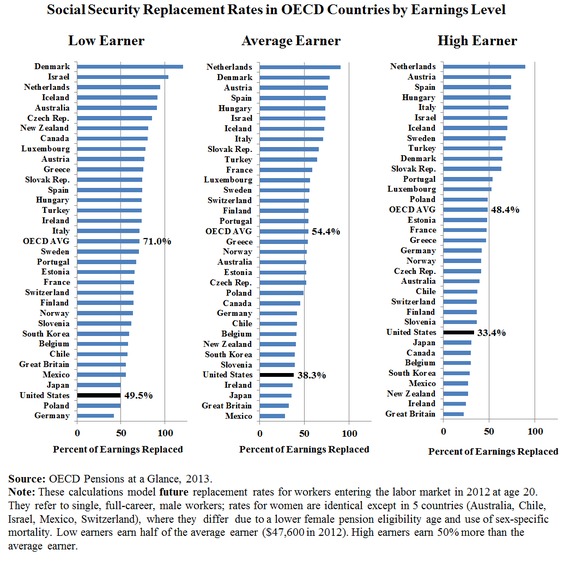 In fact, why doesn't everyone support adding to Social Security important wage insurance in the event of sickness or the birth or adoption of a child? Those benefits fit within the model of wage insurance, since they are events where workers often lose wages.

The answers to those question lead to the second lesson learned over Social Security's eighty year history. While the overwhelming majority of Americans appreciate and support Social Security, there have always been a small group, outside the mainstream, who opposed it.

When Social Security was being considered in Congress eighty years ago, opponents claimed all sorts of dangers. For example, a Republican congressman from New York charged, "The lash of the dictator will be felt and 25 million free American citizens will for the first time submit themselves to a fingerprint test." His colleague, also from New York, warned, "The bill opens the door and invites the entrance into the political field of a power so vast, so powerful as to threaten the integrity of our institutions and to pull the pillars of the temple down upon the heads of our descendants." Playing on the same feelings of nationalism around today, a Republican Senator from Delaware claimed that Social Security would "end the progress of a great country and bring its people to the level of the average European."

Indeed, from the moment of Social Security's enactment onward, ideological opponents, backed by wealthy donors, railed against Social Security. But they were vastly outnumbered. Indeed, President Dwight Eisenhower, in a private letter to his brother, wrote, "There is a tiny splinter group...that believes you can [abolish Social Security.]...Their number is negligible and they are stupid."

As the richest country in the world at the wealthiest moment in its history, the United States can afford a greatly expanded Social Security, while also greatly increasing spending on children, infrastructure, and other pressing needs. The issue is one of values and priorities. The choice is ours.

And an election is coming up where the two Parties have dramatically different values and priorities. Most Republican candidates want to cut Social Security, while a few want to maintain it at its currently scheduled level. Most Democratic candidates are on record favoring expansion.

Prior generations had the foresight and the tenacity to create Social Security and expand it, despite the powerful, monied opposition. Now it is our turn. If we follow the vision and tenacity of those who came before, Social Security's future landmark anniversaries will give us all even more to celebrate.