A gaggle of fact-checkers recently attempted to bring clarity to the question of whether Social Security adds to the deficit. Much as they did during the campaign, the fact-checkers have instead confused what is in fact quite a simple issue.

Social Security, by law, does not add to the deficit. It is not a driver of long-term debt. We’ve been over this. The reason no one can get it right is because here in this season of the fiscal cliff, no one is getting anything right. It’s a full-on headless chicken panic. Everyone needs to calm down, about a lot of things, but especially about Social Security, which does not even have to come up during the “fiscal cliff talks” because it’s totally irrelevant to the situation and will only complicate everything needlessly.

Sweet nutty, here comes the Associated Press, relying on a familiar line of reasoning, arguing that the program does in fact add to the deficit because the government "spent that money on other programs, reducing the amount it had to borrow from the public, including foreign investors...In return, the Treasury Department issued special bonds to Social Security. The bonds are now valued at $2.7 trillion. They are accounted for in two Social Security trust funds, one for the retirement program and one for the disability program. The bonds pay interest like other Treasury notes and are backed by the full faith and credit of the U.S. government."

Social Security adds to the debt if it spends more money than it takes in, so let’s look at how that’s doing in the most recent fiscal year. 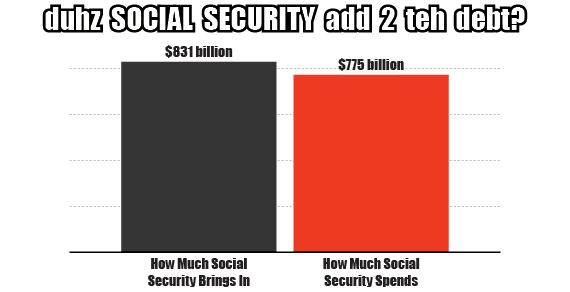 To say that Social Security added to the deficit because it handed money to the federal government is the same as saying that foreign investors or grandmothers or pension funds who bought U.S. bonds added to the deficit. Besides, what did the AP think the U.S. government would do with the money? Invest it in tech stocks? Hide it in a mattress? Replenish its gold supply? Of course it spent the money.

Glenn Kessler relies on similarly silly logic. "This looks like surplus, worth about $36 billion after rounding," he says of Social Security's surplus. "But notice that fully $110 billion of the income was interest on Treasury securities. But that interest is simply paid with new Treasury bonds." By Kessler's logic, China is running a massive, major, breakneck deficit because it holds Treasury bonds, and the only way to pay those off is with new bonds. Why it's supposed to matter to China or to Social Security how its bonds are paid off isn't made clear by Kessler.

But more importantly, how does Kessler know that the only way to pay that interest is to borrow more? He doesn't know that. In fact, the Treasury has many means at its disposal to pay interest other than through borrowing -- such as, I don't know, taxing people?

Instead of confusing itself and its readers, the AP and the rest could simply have referred to a 2011 Senate hearing, chaired by Max Baucus (D-Mont.), during which two of the foremost Social Security experts -- one liberal, one conservative -- answered the question.

Nancy Altman, head of Social Security Works, which opposes cuts to the program, read the law to the lawmakers. "The law is unambiguous. So let me read it: Social Security ‘shall not be counted for purposes of the congressional budget,'" she read.

Baucus turned to Charles Blahous, a Social Security trustee who is also with the conservative Hoover Institution. "Do you agree with that, Dr. Blahous?"

[The full exchange between Baucus, Blahous, and Altman is below.]

Let’s talk once again about Social Security solvency, shall we? The way the Social Security works is that current workers make contributions, from their paychecks, to current retirees. (This arrangement is often forgotten about -- too many people have been led to believe that they are “paying in” to their own Social Security savings, and they aren’t -- those contributions will be made by a younger generation.) The solvency of Social Security is at risk if the following two things happen: 1) the number of recipients overwhelmingly outnumber the number of contributors and 2) American lawmakers forget how to do math.

What we popularly refer to as the “Social Security solvency crisis” refers to a large population of Americans (the “Baby Boom Generation”) entering their retirement years at a time when the number of contributors is less than ideal. Hopefully, however, someone at some point is going to remember how to solve a simple arithmetic problem, raise or remove the income caps on contributions (right now, incomes that exceed $110,100 are not subject to contributions beyond that amount), and then we will never have to worry about Social Security solvency again.

And let's not forget that when Ronald Reagan and Tip O'Neill reformed Social Security -- as we're constantly reminded they did -- it's more than possible they were aware of the Baby Boom generation. If they were blessed with eyesight, they could look around and see them for themselves. They were older than 30 by then, after all. In fact, one of them, Nancy Altman, actually worked on the commission that reformed Social Security. So we asked Altman, a baby boomer, if she was aware in the 80s that she existed. She said that she was -- and that other people were aware, too. So they took the baby boom into consideration. That's why it's solvent late into the 2030s.

Knowing this makes all the hand-wringing from fact-checkers all the more dumb. Calm down and learn the subject guys, and do try to keep on task -- discussing matters that are actually germane to the fiscal cliff while we are having to talk about it every single day.

EXCHANGE AMONG BAUCUS, BLAHOUS AND ALTMAN:

BAUCUS: I think it is fair to say that Social Security probably is in a little better shape than is commonly believed. I think that is a point you made, Ms. Altman, and personally I agree with you. Second, it is clear that, on an actuarial basis, for at least the next 75 years, Social Security is going to have to be faced up to, and we have to make some changes.

But I think the question of the day really is, to what degree do Social Security payments in and out, the trust fund, et cetera, contribute to the current deficit and debt questions? The big question today in, certainly, Washington, is the debt limit and how we increase the debt limit, by how much, and so forth, and to what degree that is joined with efforts to reduce the debt and deficit. There are lots of ideas around here on that point. But I would just like to settle, as much as I possibly can—maybe I am naive—the degree to which Social Security does, today, contribute to our debt and deficit and the degree to which it does not.

Now, Ms. Altman, you made a very strong statement in that regard. You say it does not, categorically. One penny saved in Social Security does not reduce our national deficit by one penny. Essentially that is what you said. I would like to ask Dr. Blahous whether you agree, and, if you do not agree, why. I want to just try to settle this. To what degree does it add to the deficit or does it not add to the deficit?

A separate question would be -- to the degree to which it does or does not -- when to address the question of Social Security. Then the question after that is, when this body addresses it, what should some of the changes be? But first, does it or does it not add to the federal budget deficit today?

BLAHOUS Can I give you a 2-part answer?

BAUCUS: Answer any way you want.

From a unified annual federal budget deficit standpoint, I think my emphasis would be a little bit different. It is important not to conflate the deficit and the debt. Certainly net in the aggregate since the 1980s, Social Security has not added net, on average, to our national deficit and debt. The present value of the surpluses that Social Security ran in the 1980s, 1990s, and 2000s exceeds the size of the operating deficit that Social Security is running now. So I agree with that point.

In terms of its actual annual impact this year, I would say it is adding to the annual deficit. Right now the amount of tax revenue coming in to fund Social Security benefit payments is less than the cost of those benefit payments.

BAUCUS: But you are excluding interest.

BLAHOUS Right. But the interest payments do not affect the unified federal deficit. They increase the balance of the trust funds, so the trust fund continues to rise, but basically the cash flow deficit in 2011, under CBO’s latest report, is about $130 billion, and then $85 billion of that would be made up from a general revenue transfer to reimburse the trust funds for the payroll tax reduction. That is a general revenue transfer. That does not affect the unified budget deficit. Then the other $45 billion of that cash deficit would be made up through an interest payment. Those payments increase the balance of the trust funds but they do not have an impact on the unified Federal deficit. So I agree on some points, and I would emphasize others somewhat --

BAUCUS: Ms. Altman, we will give you a chance to respond.

ALTMAN Thank you. The law is unambiguous. So let me read it: Social Security ‘"shall not be counted for purposes of the congressional budget.’" Dr. Blahous talked about a unified budget, and that is perfectly appropriate for economists to talk about. You are trying to figure out those fiscal effects, and so forth. But with Social Security, by law, there is no unified budget. Social Security is not part of the budget. So that $14.3 trillion debt that we are at, the limit that you are going to have to raise -- or at least have to vote on whether to raise in a few months -- if you cut Social Security, that $14.3 trillion does not change. It does not put any room into the debt limit.

BAUCUS: All right. Do you agree with that, Dr. Blahous?

BLAHOUS I do agree with that.

BAUCUS: All right. My time has expired. Thank you.

This appears in Issue 28 of our weekly iPad magazine, Huffington, in the iTunes App store, available Friday, Dec. 21.