With Washington leaders continuously debating the future of Social Security, it can be easy to forget just how important the program has become to retired Americans.

The truth is that the bottom 80 percent of Americans have stashed little away in retirement savings programs, like 401(k)s and Roth IRAs. As a result, most Americans rely largely on Social Security for their relatively small retirement nest egg, according to Ross Eisenbrey, a vice president at the Economic Policy Institute.

By contrast, the top 20 percent of earners have more than $308,000 on average stashed away for retirement -- in part because wealthy Americans get somewhere between 70 and 80 percent of the tax subsidies intended to boost Americans’ retirement holdings, Eisenbrey said. In other words, wealthy Americans are likely the only group not relying heavily on Social Security during their twilight years.

The chart below illustrates just how much more the rich have been able to put away for retirement over the past two decades than the rest of us. Each line represents one-fifth of the population based on income. As you can see, the green line representing the top 20 percent of American earners has vaulted up over the past 20 years, while the savings of the other 80 percent have remained relatively stagnant: 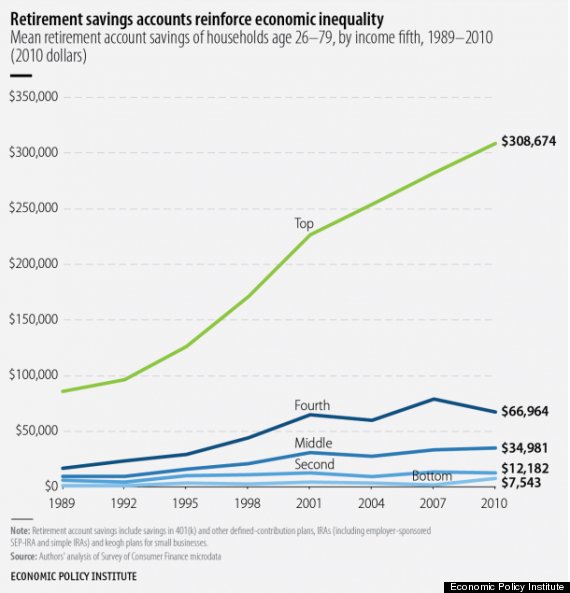 The stark contrast illustrates why Social Security is so important, Eisenbrey said.

“The only system that we have that works for most people is Social Security, in terms of providing any reliable retirement income that they won’t outlive,” Eisenbrey said. “It’s a much more equal system.”

Those 62 or older, who have been working for at least 10 years, are eligible to receive Social Security. For many retired Americans, their Social Security benefits are the biggest source of wealth they have, according to Eisenbrey. Half of Americans aren’t saving for retirement at all, according to a 2012 study from financial services association LIMRA.