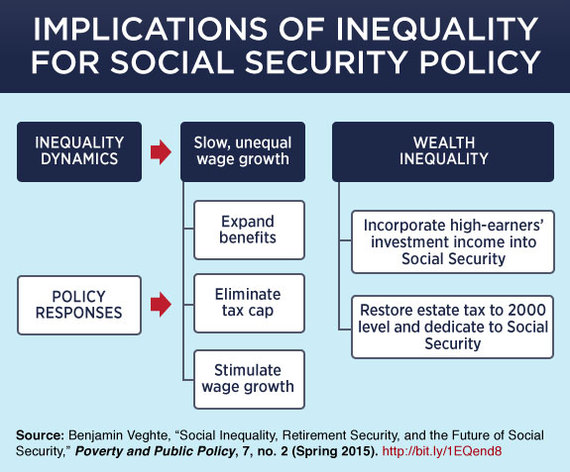 Since the late 1970s, economic forces have enabled the privileged few to take home more and more in the form of income and profits, while the wages of average workers have stagnated. Rather than combat this trend, public policies have strongly reinforced it. This has both hurt Social Security's finances and created a retirement income crisis looming for today's workers.

In response to the highly unequal 21st century economy, Congress should reform Social Security by asking high earners to contribute to Social Security on all of their income at the same rate as other Americans. Such reforms do not amount to 'soaking the rich', who would indeed receive higher Social Security benefits as a result; rather, they are part of a necessary rebalancing of our public policy framework after decades of upward redistribution.

Income, Capital-Gains and Estate-Tax Cuts Have Increased Inequality
U.S. tax policy reforms - far from reducing market income inequality - have increased it. Top marginal income-tax rates, as well as taxes on unearned income paid primarily by the wealthy, have been dramatically reduced since 1980. Among the 32 OECD countries for which data are available, the U.S. now ranks 28th in terms of the effectiveness of its policies in reducing income inequality.

Stimulate wage growth
Stronger long-term real wage growth - 1.76 percent per year, rather than the currently projected 1.13 percent - would reduce Social Security's long-term shortfall by over one-third (35 percent). Congress should invest in infrastructure and in education and training, raise the minimum wage, and make it easier for workers to bargain for fair wages. Each of these measures would lessen inequality and thereby improve Social Security's finances.

In response to rising wealth inequality, Congress should:

Incorporate high-earners' investment income into Social Security
The Affordable Care Act has already set the precedent for subjecting investment income to social insurance contributions with its new Medicare Net Investment Income Tax (NIIT). Starting in 2013, it levies a 3.8 percent tax on the unearned income of those with modified adjusted gross income (MAGI) above $200,000 ($250,000 for couples). Both to reduce income inequality, and to keep pace with overall income growth, Social Security should also incorporate the investment income of high earners into its contribution and benefit base.

The combined effect of scrapping the cap and incorporating capital income into Social Security would simply be that high earners would contribute to Social Security on all of their income at the same rate as the typical worker does. Strengthening Social Security to better reflect changes in our economy and society would make it the cornerstone for middle class retirement security in the 21st century.