According to a set of new surveys conducted in several key swing states by groups in favor of protecting Social Security, making changes to the program as part of a deal to reduce the federal budget deficit is widely opposed by independents and voters who say they're undecided on whom to support in the 2012 election, the key constituents that politicians court during election season. The vast majority of voters -- including independents and Republicans -- said they'd prefer raising taxes on the wealthy to shore up Social Security, a position that has few adherents in Congress.

In the new polls, the results that could be of greatest political import show that 72 percent of independents in the combined surveys and 77 percent of those who say they are undecided in 2012's U.S. Senate race (or the race for U.S. Congress in Colorado, where there are no Senate seats up for election next cycle) also oppose cuts to Social Security benefits.

How is it that voters don't want Social Security cuts but simultaneously think that the program will be better protected by Republicans, who publicly insist on such cuts? Part of the answer likely lies with Republican-leaning independents in the poll, who can be counted on to support Republicans in general, despite the specific question at hand.

According to the Pew Research Center's recently released Political Typology Report, which analyzed characteristics of like-minded groups across the political spectrum, one key group that largely identifies as independents but typically leans toward the Republican Party, dubbed the Disaffecteds, was especially opposed to making changes to Social Security and Medicare as a way to reduce the budget deficit. Only 15 percent of Disaffecteds said they would favor cutting entitlements rather than cutting defense spending or other domestic programs, the lowest of any group analyzed by Pew Research -- including groups comprised mainly of Democrats. 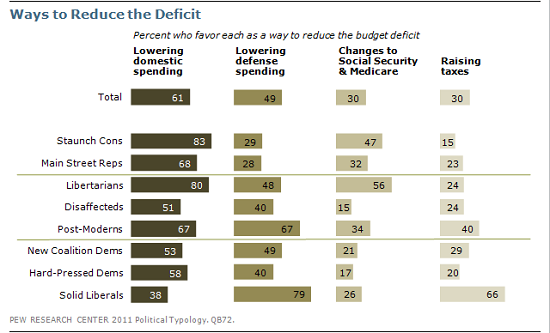 Democratic leaders in Congress have expressed an openness to Social Security cuts, although it is unclear whether that is influencing how much independents trust Democrats on the issue, or whether Americans are even aware of the particulars of politicians' positions on the issue. In addition, other polls have found greater trust for Democrats on managing the program, suggesting that some of those who said they were undecided on the new polls might lean towards supporting Democrats on Social Security if pressed.

Respondents to the new polls were largely opposed to several more specific changes to the Social Security program. Fifty-nine percent opposed raising the retirement age to 69 years old, 57 percent opposed changing the formula to reduce cost of living benefits for beneficiaries and 60 percent opposed means-testing to reduce benefits for those making more than $60,000 a year. Opposition to the proposal varies slightly by state, but does not drop below 55 percent for any of these proposals in any of the states polled.

On the other hand, the polls found broad agreement with a proposal to apply the Social Security tax to annual wages above the current cut off of $106,800 -- 70 percent of combined respondents supported that change. The majority of Republicans and Tea Party supporters also favored lifting the taxable amount.

This preference for raising taxes over cutting Social Security benefits is confirmed by other national polls. A May poll by the Pew Research Center found 59 percent of adult respondents disapproved of plans to raise the age when people can begin receiving retirement benefits, while 67 percent approved of making more of high-earners' income subject to the payroll tax. Fifty-four percent of respondents to that poll said they would oppose reducing Social Security benefits for seniors with higher incomes.

However, a March Washington Post/ABC News poll found adult respondents opposed to decreasing the rate at which Social Security benefits increase by a narrower margin (3 percentage points) than the new polls.

The new polls also found support for a proposal not to extend tax cuts for the wealthiest Americans that will expire in 2012 and instead re-purpose the revenue generated to pay for the Social Security program. That result is particularly unsurprising since most Americans supported ending those cuts the last time they were extended, even when the funds generated would not be used to pay for the popular Social Security program.

While these surveys were sponsored by an interest group opposed to reductions in Social Security benefits, the broad conclusions they reached are similar to other national polls. For example, an AP/GfK poll conducted in May found that 59 percent of U.S. adults said that the budget could be balanced without cutting Social Security, while 39 percent said that Social Security would need to be cut. A USA Today/Gallup poll in April found that 65 percent of adults were worried that Rep. Paul Ryan's (R-Wis.) budget plan would cut Social Security too much.

The new polls were conducted by the Democratic firm Lake Research Partners. Respondents were selected from a voter list. In total, the surveys interviewed 2,694 respondents. The combined results for the surveys have a margin of error of 1.9 percentage points.