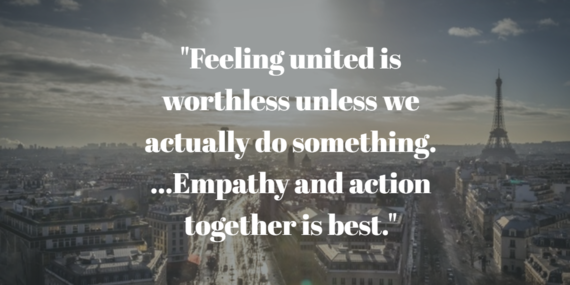 With each new tragedy that unfolds, I see an outpouring of kindness via social media. In the aftermath of the 2015 Paris attacks, millions across the globe shared comforting words and waved virtual French flags solidarity. However, other tragedies have slipped through the cracks. It's a frustrating experience to feel that your pain isn't receiving the attention or support you think it deserves. News coverage at any level is often fleeting, and our global attention span shifts to the next tragedy before anything is accomplished. These experiences always remind me of one simple truth:

Empathy is good, but action is better.

Let that sink in for a moment. We're living in an era of worldwide social awareness. Sometimes it feels like humanity is more concerned with looking good than doing good. In an ideal world, the suffering families in Syria, Lebanon, Kenya and Iraq would have received just as much comfort and support. Yet even when we can be bothered to show solidarity, it doesn't do anything to change their circumstances and they feel forgotten. We're connected and sharing information, but what are we doing with it? Are we creating solutions or just offering sympathy?

Think of any tragedy of the last five years: The Boston Marathon Bombing in 2013. The Boko Haram kidnapping of 230 Nigerian school girls in 2014. The Nepal Earthquake in 2015 and the most recent tragedies in Paris and Belgium. Shootings, disasters, and heartbreak occur seemingly nonstop. The normal response is for world leaders to share their condolences and offer their sympathy. We change our photo filters in solidarity. We watch news reports and get a little sad. The millions across social media generally echo this, and then that's the end of it. Then we return to our safe and normal lives.

It's what's called "one-click humanitarianism." It's easy to think that just because we've changed our Facebook photo color filters, we are somehow enacting change. We see all our friends and families do the same and think that we're part of a movement. It might be a great first step. It may spark a conversation, but how many people step beyond this cursory social media sharing? How many put effort toward sustained support and impactful change?

I am just as guilty as everyone else. Most of the time it's frustratingly difficult to see how we can change anything across the globe. I have to remind myself that words and gestures without real actions are worthless. It's a mistake to believe that changing our filter to a flag absolves us of humanitarian responsibility. We cannot take for granted that others will help us when we need it but remain unwilling to return the favor.

Tragedies aren't the time to push selfish agendas either. Kenneth Cole made this controversial mistake twice when their official Twitter misappropriated hashtags to boost their sales. These attempts at humor are inappropriate and show a distinct lack of empathy. Distance might allow us to disconnect from pain in the world, but we must remember that tragedies can happen to anyone -- even us.

Empathy and action together is best.

Your conscience informs the actions you should take and commits you to fulfilling them. Not everyone is capable of contributing to solving crises in the same way. After Hurricane Katrina, many faith-based volunteers in neighboring states brought tools, expertise, and vehicles to help clear wreckage and build shelters. Others cared for children, prepared food, and led religious services. Humanitarian aid knows no boundaries. One notable example is when Mexico sent soldiers, sailors, and support staff to assist in the wake of Hurricane Katrina. They set up field kitchens and medical stations across Texas, Louisiana and Mississippi. In the span of three weeks they served over 170,000 meals.

In the aftermath of the Paris attacks, many Parisians had an open door policy and opened their homes to anyone that needed a safe place to stay. Money is surely a vital part of the process, yet it is these human moments of selfless service that perpetuate a cycle of humane action. These are real examples of volunteers leading the charge and actively promoting change instead of solely tweeting and absolving themselves of responsibility.

Depending on the situation, victims might need differing types of aid. Donating blood is always valuable, especially if you're local to the tragedy. Blood banks and hospitals don't always have enough supply to meet the demand without volunteers. Donating your time, money, or food directly or to vetted aid groups can provide an enormous service. These are all actions that you can take from anywhere in the world. Even if it won't directly impact events on other side of the globe, the day could come when someone nearby will need and appreciate your efforts.

Having empathy toward each other isn't enough to break the cycles of pain. Until we take more action, there will never be lasting change. All cries for help should be heard, but being heard alone isn't the end goal. It's how we respond to those cries for help that matters. Feeling united is worthless unless we actually do something. Changing the world starts with taking positive action, no matter what form that may take. Choose to act on your empathy and create the kind of change you want to see in the world. Social awareness is only the first step in helping others - don't stumble by leaving it at that.