Social mobility is a myth.

That is the depressing conclusion -- or, if you're already part of the social elite, the great news -- of a new study by economists Gregory Clark of the University of California, Davis, and Neil Cummins of the London School of Economics. The hope that we can claw our way up from our low station to someplace fancier is a delusion for most of us, according to this study. We inherit social status from our parents just as much as, if not more than, our physical traits.

And this social status often persists across many, many generations. The title of the study -- "Surnames and Social Mobility in England, 1170–2012" -- gives you some idea of just how many generations we're talking about here: 28 generations of 30 years each. The study looked at centuries of data on the social statuses of English families. It found that many of the families who were socially elite landowners in 1170 -- your Montgomerys, Nevilles, and Percys -- were still socially elite in 2012.

"Strong forces of familial culture, social connections, and genetics must connect the generations," the authors wrote. "There really are quasi-physical 'Laws of Inheritance.'"

The study used attendance at Oxford and Cambridge Universities ("Oxbridge") as a proxy for high social status; typically only elite students go to those schools. Across generations, the "correlation coefficient" -- a number that shows the strength of the correlation between two things, with a 0 meaning not correlated at all and 1 meaning perfect positive correlation -- was between 0.7 and 0.9 for generations of the same family going to Oxbridge. In comparison, the correlation coefficient for height between generations is just 0.64, according to one study cited by the researchers.

Hang on, you might be saying, isn't England notorious for low social mobility? Isn't it the land of Downton Abbey-style snooty inherited wealth? Sure. But guess what? The United States is really not much better. A 2013 study by Miles Corak of the University of Ottawa found that the U.K. and U.S. were two of the least socially mobile countries in the developed world. Here's a chart that puts this in perspective: 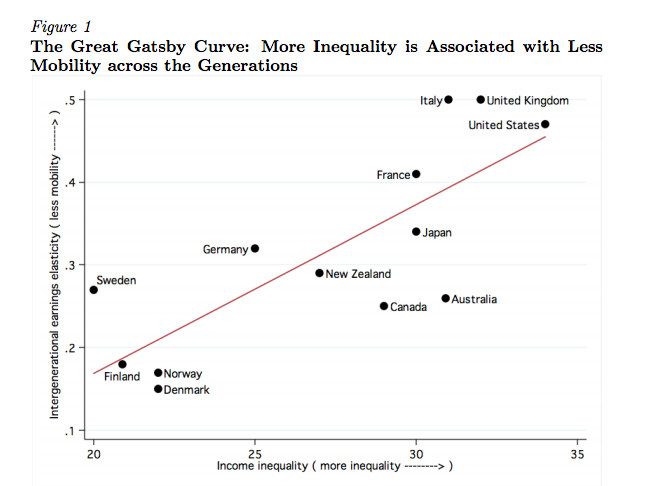 Note that, according to Corak's study, low levels of social mobility -- meaning it's hard to move from one social level to a higher one -- are also associated with high levels of income inequality.

This is the kind of world that French economist Thomas Piketty warns could become increasingly common -- one in which inherited wealth just keeps growing while incomes stagnate. It's the sort of the world we're living in today, come to think of it.

Most worryingly, the Clark-Cummins study found that social mobility hasn't really improved significantly in recent decades, despite social programs aimed at boosting it, such as higher tax rates on wealth and programs to help lower-class students get into Oxbridge.

Maybe we just haven't given such programs enough time to work, though. And given the many economic risks created by widening inequality, we shouldn't stop trying to boost social mobility.