Thanks to America’s heightened political curiosity during the election year, those two words have topped the list of the online dictionary’s most-searched items, beating out the likes of ‘touché,’ ‘Schadenfreude’ and ‘meme,’ all of which placed in the top 10. Editor at large Peter Sokolowski described the joint win as a “no-brainer,” with the decision marking the first time the accolade has been shared since Merriam-Webster’s rankings began in 2003.

“Our research showed that people would look up one [of the terms] and then immediately look up the other, which makes perfect sense,” he told The Observer over the phone. “They are words that are clearly linked politically, rhetorically, culturally and, of course, economically.”

Well, I think it's safe to say that the top-ten placement of the words ‘touché,’ ‘Schadenfreude’ and ‘meme’ probably owes a lot to this presidential election we've just endured. But it raises the question: What made this election, in particular, one in which everyone was suddenly racing to figure out what the words "socialism" and "capitalism" meant? As this funny clip from the gang at NowThisNews makes clear, it's probably because everyone kept referring to President Barack Obama as a "socialist."

And you know, it sort of stands to reason that people would want to brush up on the meaning of the word socialism, given the fact that despite being constantly accused of being a socialist sleeper agent by the tin foil hat crowd, the reality is that Barack Obama is really, really pretty bad at being a socialist! Steve Benen, in fact, calls Obama the "Worst Socialist Ever":

The New York Times reported yesterday, "United States corporate profits reached a record high in the third quarter of this year, even adjusted for inflation, according to a report from the Bureau of Economic Analysis." Here it is in chart form: 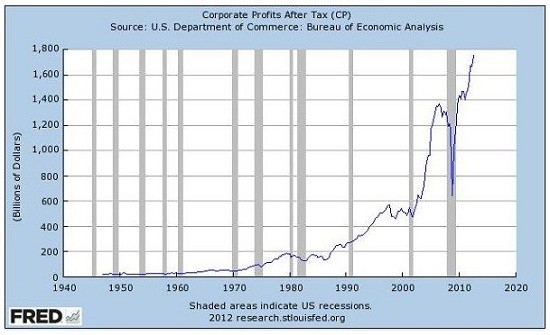 You'll notice in this image, published by the Federal Reserve Bank of St. Louis, that post-tax corporate profits collapsed when the economy crashed in 2008, but then sharply improved after Obama became president, reaching their highest point ever this fall.

Yes, it's very hard to not notice that. It's also hard to miss the fact that the wealthy have prospered during President Obama's first term, but as Chris Lehmann wrote in The Baffler:

So, wealth has been redistributed on a grand scale since 2008, but it's all been redistributed in the direction that die-hard opponents of socialism would deem preferable. (Lehmann adds, "Data from the IRS shows that the Obama years have achieved almost nothing to remedy the yawning inequalities in the economy.")

At any rate, this all explains why, when someone hears, "Obama is a socialist!" it necessitates a trip to Webster's Dictionary, just to make sure that the definition of "socialism" hasn't suddenly been changed to "an economic arrangement that favors having the wealthy rentier class make out like bandits, forever."

This appears in our weekly iPad magazine, Huffington, in the iTunes App store. This story appears in Issue 27, available Friday, Dec. 14.

Lots Of Confused People Looked Up The Word 'Socialism' In The Dictionary Because Of The Election
Most Iconic Photos Of Obama&#039;s First Term