"It's actually been one of those passion projects, a labor of love," says Nick Buzzell, a producer of the literally striking new documentary, We the People: The Market Basket Effect. In a nation still reeling and maybe recovering from years of hard-core economic strife, the production -- which depicts last year's six-week boycott of Massachusetts-based supermarket chain Market Basket -- tells the fairly unique story of 25,000 employees who largely shut down operations and stood together to get their fired CEO reinstated. Apparently Greek-American Arthur T. Demoulas believes in the revolutionary concept of reasonable treatment and compensation for employees, which got him canned by the Market Basket board and his own nearly-namesake cousin, Arthur S. Demoulas -- with decades of highly discourteous family feud as backstory, and millions of dollars lost, as a whole lotta disgruntled consumers went off and shopped the competition in staggering numbers.

We The People : The Market Basket Effect (Official Teaser) from NBTV Studios on Vimeo.

With regional, national, and worldwide roll-outs planned, the first public screening of We the People: The Market Basket Effect -- directed by Tommy Reid, narrated by actor, musician, and Massachusetts man Michael Chiklis -- took place this past Sunday at the Boston Film Festival. I spoke with Nick -- who produced alongside Mike Buzzell, Robert Friedman, Paul Nero and Ted Leonsis -- and apparently they hit the ground running.

"We started during the boycott in the New England area, last summer, as it was unfolding. And it was a very unique process, because we didn't know what the outcome was going to be, while we were filming," explains Nick. "We hadn't experienced making a film where you didn't 100% know what the end was going to be."

My mellow warm-up question about the ratio of footage shot to final edit surprisingly unleashes a torrent of information:

"What's incredible about this story is that aside from the amount of footage that we captured on the ground during the protests and boycott of last summer, this feud had been going on between this family for close to 30 years. It was an unbelievable task to bring this into an hour-and-20-minute documentary, with the understanding that the family had a '90s trial, which happened to be the most expensive family trial in Massachusetts state history -- the number I heard was approximately $300 million spent on legal fees, between the two sides of the family. There could have been a whole separate film just on that. And the story was incredible, because it embodied a Greek family who came to the United States almost a hundred years ago. It embodied the American Dream, the business of building a major corporation from the ground up." 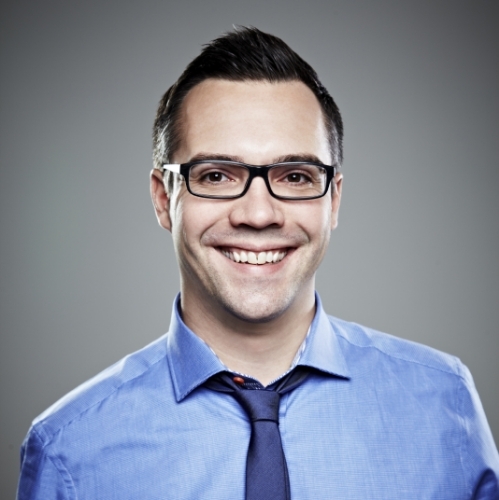 Nick goes for a sports metaphor particularly popular in the region:

"The leadership took very good care of their employees and their customers, and when that was threatened, they [those slated to be shafted] stood up for what they believed in -- peacefully organized, set up a list of demands. What was awesome was that finally the little guy was taking a swing at the baseball, and swung really hard, and won. That was, for a lot of people, a really exciting thing to witness and be part of."

"Having grown up around there -- and my whole family being from Massachusetts and New Hampshire, and a lot of people involved in the movie, including our narrator, Michael Chiklis -- who grew up in Lowell, and is a Greek American as well -- and our award winning producer Ted Leonsis who grew up in Lowell, and who is also a Greek American -- to understand the culture of Greeks in the United States -- my wife happens to be 100% Greek, so I have a little bit of insight on that as well -- and New England, and the spirit of people in New England is really next to none: I'm not quite sure if this could have happened anywhere else in the world -- because of just the spirit of New England, and how tightly-knit the community is there."

"But at the same time, while it was a very New England-driven movement, and it was related to the grocery store, Market Basket, it was something that had, as you said, this national level of understanding: a national theme -- a discourse on what's happening right now, where the 99% in the working class are under siege, and I do believe that the Market Basket story shows that leaders -- specifically CEOs in private businesses -- can actually treat their employees well, pay them well, and treat their customers well, and provide a great service -- and still make a lot of money: have your cake and eat it, too." 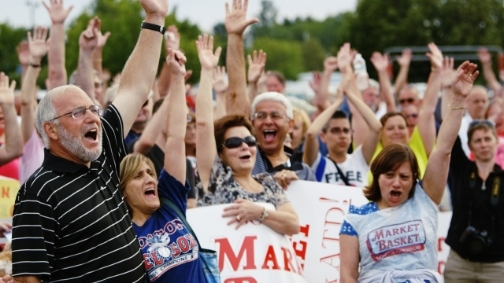 I ask if the production met with friction from the Demoulas family.

"As a filmmaker and as an ethical entrepreneur, I wanted to make sure we told as fair and balanced a story as we could. They say there are three sides to every story: yours, mine, and the truth. So I wanted to identify the Arthur S. point of view, and that side of the family's point of view, as well as the Arthur T. side. And I also wanted to look even deeper -- and I know that the director, Tommy Reid, and the rest of the filmmaking team agreed that we really wanted to make sure that we covered as much as we could, and we really understood both sides, as well as what the truth may be.

"You can definitely see it -- I think this is what's so interesting about the film -- as much as it was a movement of the people to boycott the store, to regain control, to essentially get the business back in the hands of Arthur T., who they believed was the leader who would protect their way of life, Arthur S. -- in the argument that he made for why he wanted to do things differently -- was like the argument that's going on in major corporations across the world: the shareholders should be the first in line to receive the financial proceeds of the company, and then people that work for the company should be compensated, but not overcompensated.

"When you think of that dynamic, in some ways, Arthur S. was the pillar of one side of the argument, which is essentially the argument that Wall Street makes every day, which is: profits before people. And then Arthur T. was the other side, which was (paraphrased): 'I'm going to take care of my employees before I take care of my shareholders, or my own back pocket.' But at the same time, when you look at the facts of the story from both sides, they were both guilty of doing things to escalate this."

Hey, two towers; I love an epic story -- so I add the vaguely-related tangent that, while I was interviewing Viggo Mortensen for the Lord of the Rings movies in 2003 (lil' New Line connection there), Aragorn who would become King Elessar was driving around L.A., taking note of the Albertson's supermarket employees who were then very visibly on strike. Aware that people are people and business is business, Nick connects the dots:

"When Arthur S. and the eight shareholders fired Arthur T., they installed two CEOs: one of them was a guy named James Gooch, who was the former CFO at RadioShack -- you know what the outcome of that company was -- and the other one was Felicia Thornton, who actually was the former CEO of Albertson's. The part that probably did not work in their favor was that they got those two to lead this, who were so different from Arthur T.'s style, and people in the industry knew who Felicia was -- they knew that what was going to happen was what happened to Albertson's. I think that's what rightly fueled their immediate action. They said, 'In order to prevent this, we've got to do something, and we've got to do it now." 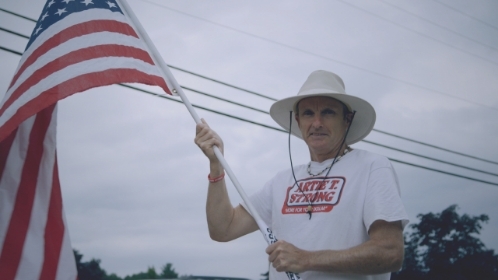 Indeed, they did something. And apart from those so crazy-rich they pay someone to brave the supermarket for them, chances are good that We the People will connect with audiences, right in the ol' Market Basket. Its first public screening was last Sunday at the Boston Film Festival, followed by a worldwide release of the film on multiple platforms.

Images and trailer courtesy of the producers.

We the People: The Market Basket Effect Official Website