For the first time in at least 16 years, Americans are equally likely to describe themselves as socially liberal as they are to say they're social conservatives, a new Gallup poll finds.

Thirty-one percent of Americans say they're liberal on social issues, with another 31 percent calling themselves conservatives and the rest identifying as moderates.

In 1999, when Gallup first began tracking questions on ideology, Americans were 18 points more likely to describe themselves as social conservatives. Since then, the gap has narrowed, with the exception of a spike in conservatism at the beginning of President Barack Obama's first term. 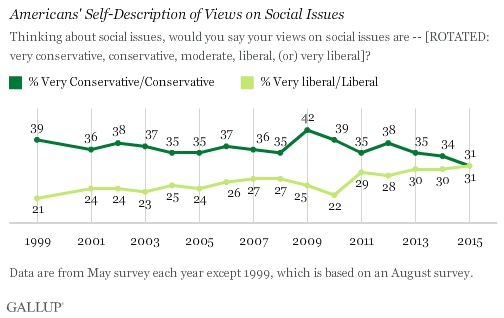 Much of the change is due to a long-term shift among Democrats and independents who lean toward the Democratic Party, a record 53 percent of whom now call themselves social liberals. A majority of Republicans still say they're social conservatives, but that number has also dipped in recent years, with an increasing minority in the party instead saying they're moderate on social issues.

"Americans' growing social liberalism is evident not only in how they describe their views on social issues but also in changes in specific attitudes, such as increased support for same-sex marriage and legalizing marijuana," writes Gallup's Jeffrey M. Jones.

Views of economic issues have also shifted somewhat, although conservatives continue to hold a 20-point advantage over liberals on the topic. An increasing minority of Democrats now say they're economic liberals, while the percentage of Republicans who say they're economically moderate is as high as it's been since Obama took office. 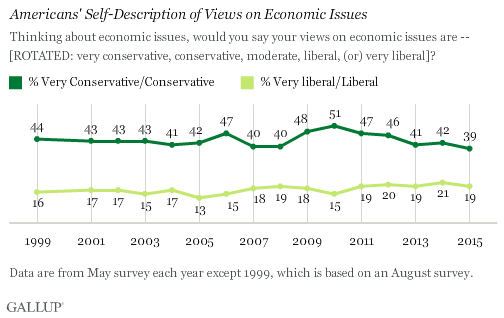 Americans' move left on social ideology may signal a change in the way some issues are debated this election year, but it hasn't shown much impact on Americans' choice of political parties. While people are increasingly likely to call themselves political independents, polls have shown that the percentage who say they lean toward either the Republican or the Democratic Party has remained largely stable over the past two decades.

Gallup surveyed 1,024 adults between May 6 and May 10, using live interviewers to reach both landlines and cell phones.