As a young boy, I remember when my Grandma Dorothy gave me the book Rosa by Nikki Giovanni, but it was not until more recently that I learned that Rosa Parks was not the first to woman to deny her bus seat to a white person. Before now, my history classes had told me that Rosa was the one. Triggering a series of questions, I noticed a pattern: Some of the most successful people to push through successful social change are those that benefit from the privilege of looking like and sounding like the macrocultural group.

Rosa Parks
"Let Rosa be the one. White people aren't going to bother Rosa -- her skin is lighter than yours and they like her," Claudette Colvin, the first Rosa Parks, remembered her mother telling her. Just nine months before Rosa Parks suffered a similar incident, 15-year-old Ms. Colvin was riding a Montgomery bus home from school when the driver requested her seat for a middle-age white woman. Well, you know what happened next. Kicking and dragging her, two polices officers took Ms. Colvin off of the bus, and continued to taunt her by trying to guess her bra size. 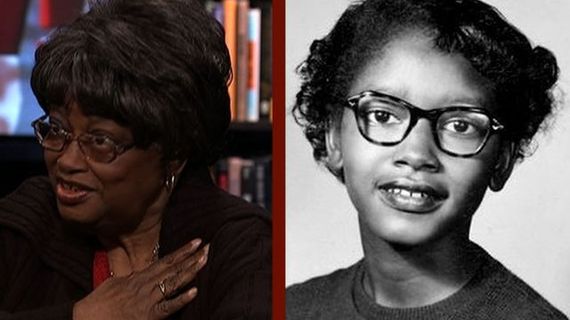 Behind closed doors, the civil rights movement did show their solidarity by writing Ms. Colvin letters. Yet, Ms. Colvin was not the case that was selected as the face of Montgomery bus boycott. Today, history records Rosa Parks as the ground-breaking revolutionary. Streets and schools are named after Rosa Parks, and she is one of Time Magazine's 100 most important people of the 20th century.

Hamilton Holmes and Charlayne Hunter
Flipping through the University of Georgia's 1963 yearbook, one would find the face of Hamilton Holmes, the university's first Black male graduate, but because the yearbook is in black and white print, you would never be able to easily find Hamilton if I had only told you he was Black, because Hamilton was a very fair-skinned Black man. His skin tone "normalized" himself amidst UGA's Class of 1963.
Hamilton, like his fair-skinned classmate Charlayne Hunter who also helped integrate UGA, were the faces of UGA's integration. Together, they would come to challenge and defeat UGA's 176-year-old ban on the admission of black students. While never uttered, one has to wonder if their case was taken up by civil rights attorneys because of Hamilton's and Charlayne's appearance. Would their lighter skin tones make them more favorable in the eyes of their White classmates?

Mary Fisher
It took nearly two decades and thousands of gay men's lives lost before the world would listen to AIDs victims, but individuals like HIV-positive Mary Fisher began to speak up, shattering the stigma of HIV as a "gay man's disease." In her silencing speech to the 1992 Republican National Convention, Mary Fisher, the daughter of a prominent businessman, encouraged her party to tackle the AIDS crisis head-on:

Tonight, I represent an AIDS community whose members have been reluctantly drafted from every segment of American society. Though I am white and a mother, I am one with a black infant struggling with tubes in a Philadelphia hospital. Though I am female and contracted this disease in marriage, and enjoy the warm support of my family, I am one with the lonely gay man sheltering a flickering candle from the cold wind of his family's rejection.

Although not flawless in their approach, the Republican Party in 1992, led by President Georgia H. Bush, helped lift the shroud over the AIDS/HIV epidemic, and Mary Fisher and her family personally lobbied President Bush on the matter.

Laverne Cox
On the cover of TIME Magazine, Laverne Cox, has become the image of the transgender movement. Popular media listens to Laverne Cox, but the stories of Taja Gabrielle DeJesus, Lamia Beard, or Ezekiel Dear, three transwomen who have died since 2015 began do not make the same headlines. In contrast, society accepts Laverne's beauty, because when we look at her it is easy to dismiss her history and only see her beauty. She appears "normal" to people.

Hamilton and Charlayne, having a fairer complexion, looked more like the very people who they were obstructing black freedom and justice at the University of Georgia. Similarly, the Montgomery, Alabama citizens who sought to uphold segregation were physically more akin to Rosa Parks than Claudette Colvin. Even in 2014, gay Republican men were denied a booth at the Texas Republican Convention, but Mary Fisher was not a gay man addressing the 1992 National Republic Convention. She was a cis-gendered, married woman, and mother when she delivered her concerns -- to people who largely ignored the gay community -- and people would listen her. Last but not least, Laverne Cox is described by inStyle magazine as their "new beauty idol," begging the question, "why?" Is it because she does not appear queer?

These observations do not serve to lessen the work of Hamilton Holmes, Charlayne Hunter, Rosa Parks, Mary Fisher or Laverne Cox, but rather, shine light on the untold story of why they will be lauded as the timeless heroes for the struggles they fought, and perhaps the untold story of why other champions of the same struggle will not get the same recognition. These factors that made these individuals privileged -- their less identifiable minority markers -- did not make their journey effortless. Often, their lives were threatened, and their brilliant achievements have paved the way for others.

We need these champions, but in some ways these champions are reminders that our work towards eradicating social ills is not done. We've only begun to scratch the surface.