There is an old Jewish parable: the parable of the fifth son. "A man has five sons. Four are at the table eating. But the fifth son is the one who is not at the table. The fifth son has gone wayward. Yet, his seat is still reserved for his return."

Perhaps you have seen him, with all of his belongings in plastic bags. He is a heavy-set, middle-aged, black man residing on the city bench, alongside the Tattered Cover Book Store, in Denver's LoDo district.

I work as a district manager for Heart Check America. I come to work at eight am and go home at five pm.

Seven days a week, he sits with a defiant dignity -- in silent protest. Not once has this homeless man ever asked for any food or money. Nor have I ever witnessed him panhandling.

Oddly enough, at the very same location, a perfectly healthy, clean-cut boy, on a $500 bicycle relentlessly begged for spare change. I wanted to throw the little urchin's bike under the bus when he didn't take no for an answer. 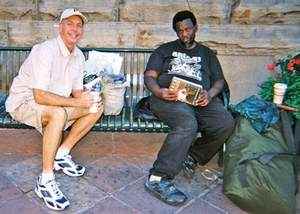 No, the man on the green city metal bench was different. He was speaking to me, without saying a word.

I questioned my general manager about him.

He said that in all the years he has worked downtown, he never saw this man begging, not once.

All of the years, I thought.

With that response, I felt deep shame.

I felt shame not for this homeless man's situation, but for people not noticing; perhaps not caring. He has sat there for years and no one has helped.

Secretly, I believe, some folks wish he would just go away. They would rather he was invisible. So, they blank him out of their existence.

He has become one of society's invisible people.

These invisible people all too often have been deemed by society as "scum." Yet they are victims of urban plight and inner city decay -- the poor and the downtrodden. They include the homeless, mentally ill, unwed mothers on welfare, runaway teens, ex-offenders, the uneducated and unskilled, illegal immigrants, and residents of inner-city housing projects.

We forget that they are part of the human family. They are, like or not, included in the very fiber of the tapestry of life -- the fifth son who is not at the table. Their struggles affect the whole of humanity, our very way of life. In order for me to hold my head up high, the man on the green city park bench needs to be able to also.

As fate would have it, I joined the ranks of the less desirable and unwanted, back in September of 2005.

In Summit County Court, I pleaded guilty to theft. I received a three-year prison sentence. I'm presently serving the final months of that sentence on parole in Denver.

There is a stigma that comes with being an ex-offender writer and an activist. Some people ponder: who is this guy to tell us anything, just look at where he has been? What can he possibly know? A criminal giving advice?

I know now how this homeless man feels: disconnected.

Nevertheless, he has not given up. His vigilance and dignified behavior on the city bench (his home), says more about who he is, than all the people that whisk by him without a glance.

This man on the bench has staked out his own little piece of human triumph over great adversity, without saying a word.

We need to do the same. These invisible folks' struggles are our struggles. By helping those most in need we grow in love and humanity.

Because if we don't, we'll lose ourselves in the process.

Michael J. McCarthy can be reached at mjmccarthywrites@yahoo.com