Americans are so over soda. And while that may be good for the their expanding waistlines, it’s bad news for the companies that make the sugary drinks.

Just take a look at this chart from IBISWorld, a global market research firm, predicting the future of soda consumption: 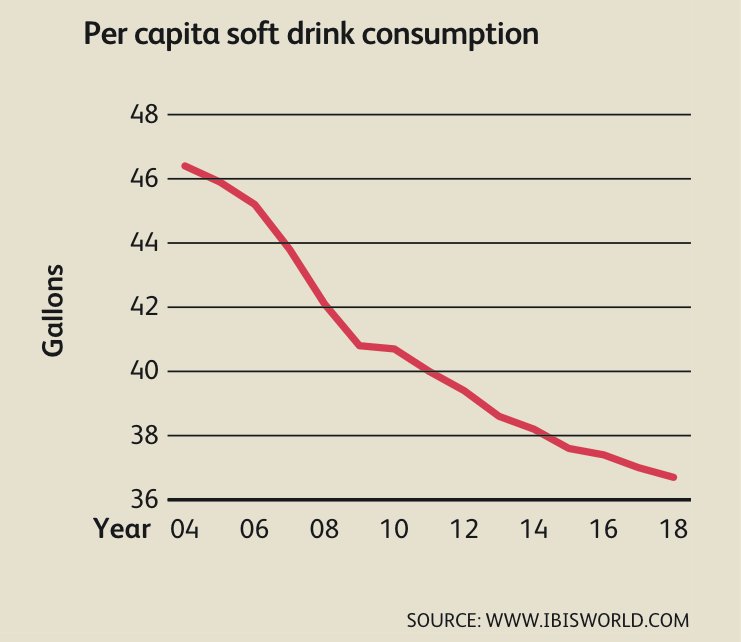 The soda industry is certainly taking notice. Coca-Cola announced Tuesday that its profit slipped last quarter due in large part to a 3 percent drop in soda sales volume in North America. And after reporting struggling soda sales last week, PepsiCo, the second largest soda producer, is facing pressure to spin off its lagging soda business and focus on its better performing snack unit, Frito-Lay.

Americans are becoming increasingly aware that soda is bad for them, according to the IBISWorld report. Thanks to government, industry and media campaigns, we’re now constantly bombarded by messages about sugary soda’s relationship to obesity and diabetes and the possible risks of consuming diet drinks with artificial sweeteners.

"About a decade ago we saw a lot more people turning to diet soda, thinking that it's a healthier alternative to regular soda," said Hester Jeon, a food and beverage analyst with IBISWorld. "Really in the past five years, people have become more aware of consuming artificial sweeteners and overall soda sales are declining."

Since 1994, 33 states have introduced taxes on soda and if former New York City Mayor Michael Bloomberg gets his way, New Yorkers won’t be able to buy large sodas anymore. These kinds of regulations can “significantly dampen” demand for soda, according to IBISWorld.

So what’s filling the void? In some cases, it's just plain old water. But sales of healthier alternatives like ready-to-drink iced tea, sports drinks as well as flavored and sparkling water have also taken off, the IBISWorld report notes. Sales of sparkling water jumped 8.6 percent between 2009 and 2011, for example.

Soda makers are scrambling to get in on this market, introducing their own lines of fruitwater and lower calorie sodas that taste like the full calorie version. Coca-Cola is even offering consumers the chance to make their own soda at home, in hopes Americans will opt for a product that allows them to adjust the levels of sweetener in their drinks.

It’s sales of these products that in many cases are offsetting soda makers’ losses on, well, soda. "A lot of beverages that are high calorie are down and people are drinking more water instead," Jeon said. "Healthier beverages like sparkling water, aloe drinks, kombucha, coconut water -- the demand for those beverages are growing -- but it really targets a small consumer group because not everyone is going to be interested in drinking aloe."

Another (infuriating) way soda makers are still making money? By taking advantage of brand loyalists like this writer, who will pay to get their Coke fix, even if the company raises its prices, IBISWorld found.